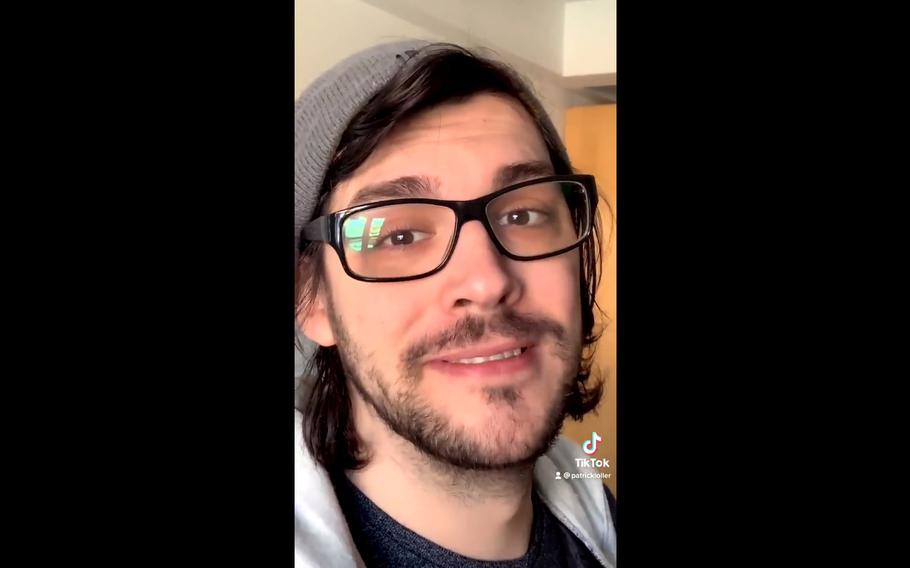 U.S. Army veteran Patrick Loller, pictured, posted a video in which he states that those who don’t wear a mask are “cowards.” The video prompted a response from Fresno State College Republicans that Loller called out as making fun of veterans. (Screenshot from Twitter video)

FRESNO, Calif. (Tribune News Service) — Fresno State issued a statement supporting the United States military and its veterans on Wednesday after a former Army medic-turned-comedian called out one of the university's student groups for making fun of veterans.

The Fresno State College Republicans, through the group's Twitter account, got into a social media tiff with disabled vet Patrick Loller after one of his videos about wearing a mask circulated this week.

In the video that prompted a response from the Fresno State College Republicans, Loller states in an exaggerated tone that those who don't wear a mask are "cowards."

"The fact that you equate putting a piece of cloth over your face to stop the spread of a deadly pandemic with WEAKNESS, lets me know just how small you are as a person," Loller says in the 58-second video. "You're terrified that other people will think you're weak. Because you are.

"And ironically, by not just wearing a mask when you go out in public, you are broadcasting to the world exactly how much of a coward you actually are. It's amazing. Your fragile little ego is taking people's lives."

A little PSA for my anti-masker men out there pic.twitter.com/6gmZ8xnq3S

The Fresno State College Republicans then retweeted Loller's "PSA for my anti-masker men" with some words of their own.

"You're such a hero that you'll break down when I light fireworks next door," the Fresno State College Republicans tweeted before it eventually was deleted.

But Fresno State College Republicans weren't done sharing their thoughts on military vets, sending out another tweet Tuesday night, which as of 7 p.m. Wednesday was not deleted.

"Maybe guys who are actually fighting in combat are brave and whatnot, but the vast majority of our military are glorified DMV employees," the Fresno State College Republicans tweeted out. "They work against what we as conservatives believe all the time with few exceptions."

In a telephone interview Wednesday with The Bee, Loller said he served 10 years in the Connecticut Army National Guard and was a combat medic and part of a infantry battalion that was sent to Afghanistan in 2010.

He described himself as a disabled vet and said he suffered brain damage during the attack in Afghanistan. After medically retiring from the Army in 2016, Loller became a comedian.

He said he often gets social media responses critical of his views, especially on wearing masks and getting vaccinated.

But he was surprised to see a response from an official student group account.

Loller countered by making a TikTok video that directly called out Fresno State College Republicans for their remarks.

"Gosh, imagine having your masculinity called into question by a dork like me," Loller said, "and your response is to insult every veteran who's ever been jumpy after hearing an explosion."

Loller, in the phone interview, admitted he intentionally tries to annoy and mock anti-mask/anti-vaccine people with his videos "because the pandemic is real and I think what they're doing is wrong."

The New York resident also said he wanted to point out the hypocrisy he often sees from people who claim to be part of the Republican Party.

"What I've found from triggering Republicans is that they think I'm only a veteran as long as I agree with them," Loller said. "If not, they say 'Oh, you're not a real veteran.' Or 'You didn't serve in combat.'

"Like these tweets. Here's someone calling themselves Republicans and straight up disrespecting the troops."

As the social media exchanges between Loller and the Fresno State College Republicans spread and some people tagged the official Fresno State account, university administration sent out its own tweets about the military.

"We have been made aware of recent social media posts by a student organization that are deeply concerning and inconsistent with the University's core values," the university's tweet said. "Fresno State strongly supports our nation's military and its veterans.

A second tweet by Fresno State said the incident had been referred to the Dean of Students for further review.

Loller said he saw Fresno State's tweet but was not contacted by anyone at the university or by anyone claiming to be part of the Fresno State College Republicans.

"I'm not looking or need an apology," Loller said. "At the end of the day, I think it's funny. Because the Republicans claim to be 'the party of personal responsibility.' Then they make comments and delete tweets and try not to take any responsibility about what they said.

"Just wear a mask and get vaccinated."