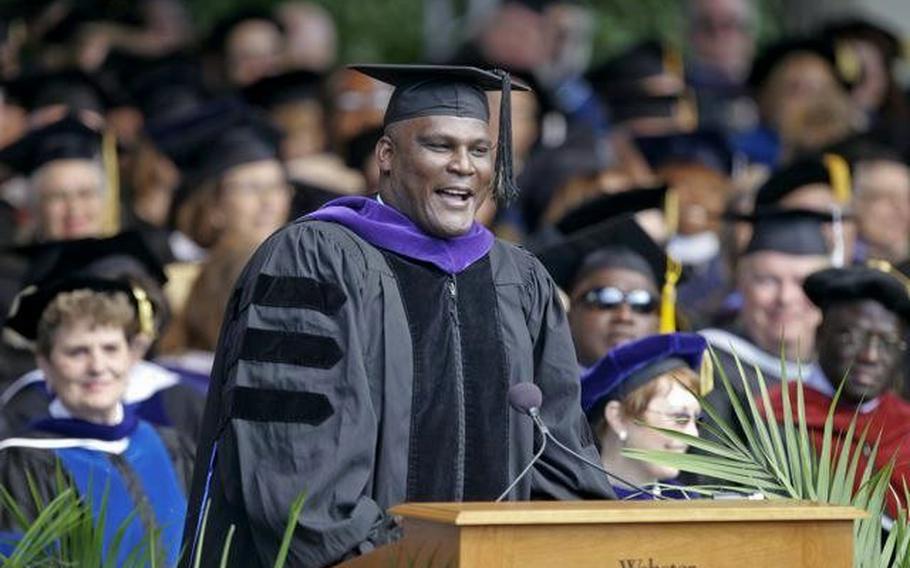 MIDDLETOWN, Ohio (Tribune News Service) — While returning from a memorial service for two soldiers from his brigade, Lt. Col. Greg Gadson lost his legs above the knee and severely injured his right arm in a roadside improvised explosive device (IED) attack in Baghdad.

It was the night of May 7, 2007, and Gadson of the 2nd Battalion, 32nd Field Artillery had no idea if he would survive the explosion or ever return to his family. He also wasn't aware it was the beginning of a journey that led him to the seventh annual Warrior Weekend to Remember in Middletown.

There are about 40 combat-injured soldiers and 25 Gold Star families in town this weekend for an event sponsored by Team Fastrax, the Middletown-based professional skydiving team.

Each of them has an incredible story to tell. Gadson is no different.

"Courage is the first word that comes to mind," John Hart, owner of Team Fastrax, said when asked to describe Gadson. "Col. Gadson is the most humble man I know. He just wants to help everybody. When soldiers are having trouble, he's the first person they call. He's a hero in life and a war hero."

Gadson will give his testimony during the 9:30 a.m. service today at Berachah Church, 1900 Johns Road in Middletown. Pastor Lamar Ferrell said Gadson's determination should serve as a learning opportunity for the rest of us.

"His life has not stopped when it could have," Ferrell said. "He has used that platform to show triumph over trouble. He has not allowed the lack of limbs from him basically walking into peoples' lives and encouraging them."

Gadson, 55, said it's "always humbling" when he's asked to be a motivational speaker to a large church congregation or one-on-one in a quiet room with a soldier struggling with post traumatic stress disorder.

"If I have to I will accept a small credit," he said while at Camp Chautauqua, site of the Warrior Weekend To Remember. "I can't make people change. They have to make that decision, but if I can be the spark, I will accept that."

He was commissioned as a 2nd lieutenant of Field Artillery in 1989 from West Point. He served in the U.S. Army for 25 years, retiring in 2014. He also was former commander of the U.S. Army Fort Belvoir in Fairfax County, Va.

On several occasions, Gadson has testified before Congress on issues related to wounded warriors, veterans and those with disabilities.

"I had to do something after losing my legs," he said. "I knew they were not coming back. You are disabled only if you let yourself be disabled. I always want to grow and challenge myself. Life is not easy. It never was promised to be easy. We have an obligation to fight and to be our best. Always be present and let go of yesterday. Try to be an example for those who come behind me and struggle."

That certainly was the case just months after his war injuries.

Gadson played for the Army football team between 1985 and 1988, and one of his teammates was Mike Sullivan, who played cornerback and safety and was one of Tom Coughlin's assistants with the New York Giants in 2007.

When Sullivan learned about Gadson's injuries, he visited him at Walter Reed Army Medical Center and presented him with a No. 98 Giants jersey, the same number he wore at West Point. When asked what else he wanted, Gadson said he'd love to take his family to a Giants game.

The night before the game against Washington, Gadson addressed the Giants, who were 0-2 at the time. The Giants won that week. He also was there for two playoff wins over Tampa Bay and Green Bay and when the Giants beat Tom Brady and the New England Patriots 17-14 in Super Bowl XLII.

In recognition for his contribution to the team, Gadson received a specially minted Super Bowl ring.

"One second I didn't know if I was going to live, see my family again," he said. "Then I'm part of crowning the Super Bowl champions. You don't dream that."