Walking stick company hopes to prop up lives of veterans 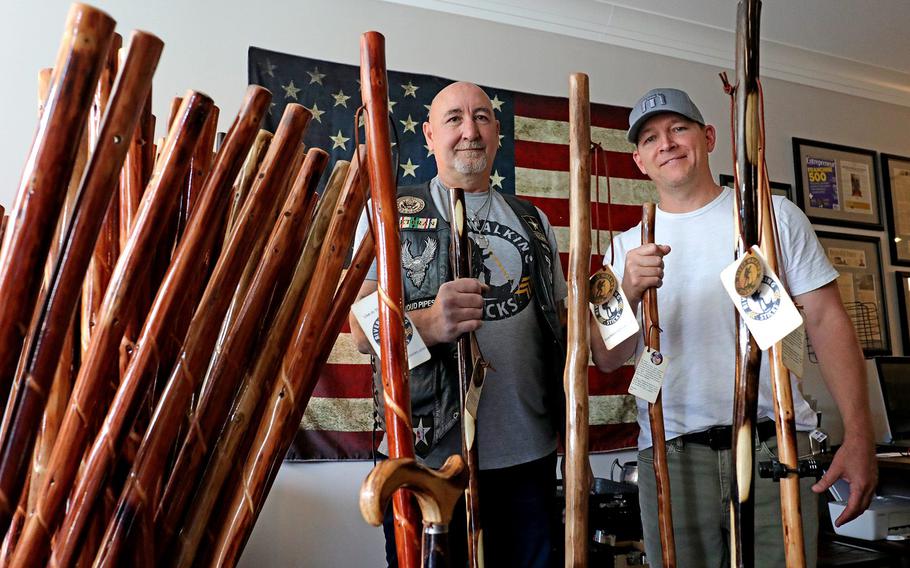 Ken Watters, of Canal Winchester, left, is one of the veterans who works for River Walking Sticks, a business created by Dublin resident Joe Daley, right. It employs veterans and donates to organizations that help them. (Fred Squillante/Columbus Dispatch)

(Tribune News Service) — Joe Daley is a big fan of exploring the banks of the Scioto River in Dublin, Ohio, where he lives. And he knows the value of a good walking stick when creeking, both for balance and for poking at foreign objects.

Some of those features may also be considered guideposts of healing, a value behind Daley’s new company, River Walking Sticks. It aims to help veterans and some who have lost their way by employing them and donating to causes that assist them.

Daley’s idea for the company was sparked last year ago during a relaxing hike in a pristine setting guided by the Scioto River’s gentle flow.

That’s when he saw him.

“I noticed a man sitting on the river bank with his car parked behind him full of his belongings,” Daley, 50, recounts on his River Walking Sticks website. “I approached him, and we started to chat about walking sticks and how much fun it was to finish them.”

The man eventually told Daley that he was a homeless veteran and living in his car. Before parting ways, Daley said he felt compelled to help.

“When I tried to give him some cash, he almost appeared embarrassed or disappointed,” Daley told The Dispatch.

Instead, Daley, thinking on his feet, decided to offer the man a job, sanding and varnishing the sticks. The man smiled and agreed to the arrangement, a simple act of kindness by Daley in exchange for a few hours of labor.

Within hours, on his drive home, Daley began envisioning his company and the stranger’s kind and humble manner.

“I knew I was going to do something for him,” Daley recalled. “He was excited in the opportunity handed to him. You give someone money, it’s not necessarily an opportunity.”

For both, the chance meeting was a boost in pride and purpose — and the birth of a new enterprise.

The man has since been receiving mental health and housing assistance and has been unable to work. But Daley has a few other veterans employed with River Walking Sticks.

One is Ken Watters, 55, of Canal Winchester, who helps finish the sticks, adding military insignia, flashlight-compass sets and inspirational quotes. Watters’ picture and story, along with those of others who finish the sticks, is attached by a lanyard to the sticks shipped out across the country.

“It really has brought me out of a dark place,” said Watters, an Army veteran who served in the First Gulf War in the early 1990s and who today suffers from post-traumatic stress disorder and epilepsy.

Watters said he has been living on disability benefits since 1992 and helping his family with odd jobs. And while the former auto mechanic misses full-time work, he’s thankful to have a purpose helping others, if only for a few hours each week.

After covering his costs, Daley donates proceeds to causes such as Faith Mission and Save A Warrior, both in Columbus.

“It means everything to us,” said Laura Rapoch, director of development for Save a Warrior, a suicide prevention organization for veterans. “We charge nothing for our services and are privately funded. This allows us to do our work and take some of the burden off.”

And that’s exactly what River Walking Sticks aims to do with veterans and others: reduce the burden.

“We recognize in the work that we do that we all need a helping hand. They’re helping our veterans to have a focus,” Rapoch said. “Those walking sticks are offering support throughout your journey in life ... allowing you to walk on your true path no matter what your path has held.

For Daley, the walking stick company is only his latest entrepreneurial endeavor.

His main source of income is LogoMyWay, an online business he started in 2008 to connect those seeking business logos with designers who compete with each other to provide them.

He also operates Molly’s Movement (mollysmovement.com), a support group for dementia patients and families. He was featured in The Dispatch and national media after chronicling his late mother’s illness in a series of videos.

That platform is where customer Jen Gladish learned about the walking stick effort.

“I just love the things he’s doing,” said the Dublin resident who has several veterans in her family. “I immediately bought a walking stick.”

Daley’s entrepreneurial road, like many, has had a few bumps, including a fire last month at his apartment building where his inventory is stored. He’s had to leave his home — and put production on hiatus — while crews make repairs, but nothing in his apartment was damaged.

He had been using his living room and kitchen to arrange by color and size the sticks that originate in Kentucky and are varnished in New York. He also keeps hundreds of vintage military buttons and other hardware, including handles to make canes.

Eventually, he hopes to have more than a lathe and power drill and a few veterans to help, and more than 50 sales a month for the $50 sticks. His goal is to have veterans contribute to the entire production chain.

“I would like an office warehouse and make it a fun place for people to work,” Daley said.

Helping strangers is important to Daley, who was raised by a single mom with financial struggles, at one point living in a garage.

“Nothing was ever handed to me,” he said. “I find that just by talking to people, they all have a story and deserve a chance.”

Likewise, each walking stick has a unique story.

“The sticks fall off the trees, bang against rocks and that sort of finishes them. Who knows how long this traveled in the river?” he said picking up a yet-unfinished stick.

The wayward branch made useful has become a metaphor for life’s journey, its struggles and hope to find purpose and hope.

Watters said he’s glad his journey brought him to Daley.

“This guy’s brought a lot of happiness in my life,” said Watters, who tears up thinking about helping others. “It (the work) gives us inspiration ... always moving forward.”