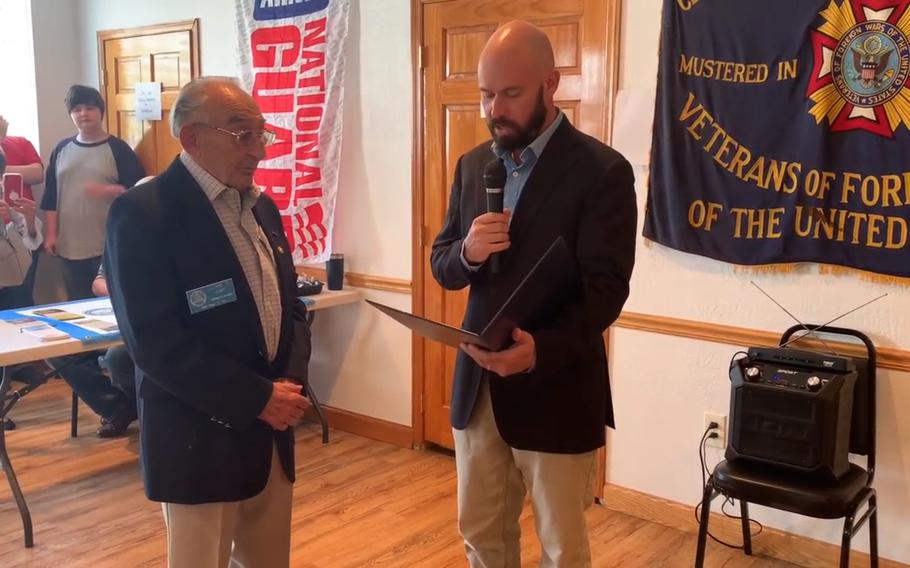 CENTRAL CITY, Pa. (Tribune News Service) — John Thomas Lody is one of the few surviving members of the 5,000 combined United Nations, United States and Greek forces who successfully defended Outpost Harry against an attack by the numerically superior Chinese during the Korean War.

The weeklong battle took place in June 1953, about one month before an armistice was signed.

On Tuesday, Lody was honored for his contribution with an award of Congressional recognition and Pennsylvania House of Representatives citation during a Veteran Community Initiatives rural outreach event at Central City-Shade Memorial Veterans of Foreign Wars Post 7457.

“It means a lot,” said his son, John Jacob Lody. “Growing up with him, he didn’t talk about the war very much for obvious reasons. I’m sure it brings up a lot of painful memories. But as he’s gotten older, he’s revealed more about his service to the country. As I’ve matured as an adult, it’s made me super-proud of what my dad’s accomplished.

“For the longest time, I knew him as a town barber, but I also know him as a hero, a war hero. It’s been absolutely an honor to watch him sort of embrace a part of his life that is painful, but also remember he did it for everybody else to ensure we are all free in a free country.”

John Thomas Lody, now a 90-year-old Army veteran who lives in Central City, spoke about the “unbelievable hell of killing people,” but also expressed how “wonderful” it felt to share the day with his family.

U.S. Rep. John Joyce, R-Blair, 13th District, presented the congressional certificate, thanking Lody for “maintaining the incredible freedoms that our fore-founders fought for” and offering “heartfelt and sincere thanks on behalf of the federal government for what you did for us in the Korean War.”

State Rep. Carl Walker Metzgar, R-Berlin, 69th District, told Lody that he is “eternally grateful” for his service during the war.