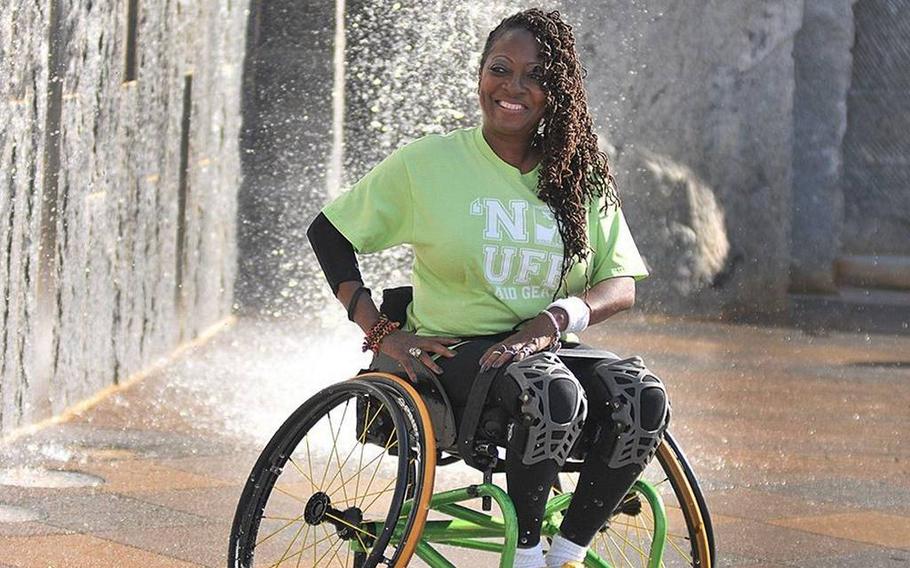 Twila Adams, who served 11 years in the Army, says her accident didn’t happen to her, it happened for her. (Courtesy of Twila Adams)

CHARLOTTE, N.C. (Tribune News Service) — In 1994, Twila Adams was just three years into civilian life — after serving 11 years in the Army — when the unthinkable happened. A right turn gone wrong left her paralyzed from the neck down. Doctors told her that she would never have use of her arms or legs again.

She had other plans.

Nineteen years later, at age 62, Adams will compete at the 40th Annual National Veterans Wheelchair Games on Aug. 7-14, in New York City. This is the Charlotte woman’s 13th time competing, and this year her events include disc golf, javelin, discus, shot put and adaptive fitness.

“I had to go through some things after my accident to realize I’m still here, there’s still hope,” Adams said. That included not listening to naysayers. “I didn’t need the negativity. ‘Oh, you think I can’t do that? Oh, I’m not supposed to do this? Well, watch me.’ Was I afraid? Yes, of course, but I learned to do things I was afraid of a long time ago.”

From day one in the hospital, Adams pushed herself and those around her to never settle. “I had a conversation with my nurses, and I said, ‘Look, we are going to do this together.’ I told them when you bathe me, you scrub and rub as hard as you can. Maybe if you do that, some of the messages will come back,” Adams said.

Eventually through hard work, pain, determination and dedication, Adams was able to defy the doctors’ predictions and regain feeling and partial use of her extremities. She is considered a walking quadriplegic, able to stand with support and shuffle forward a few steps, though she competes and operates in daily life from a wheelchair.

It was during a physical therapy session in 2002 that Adams first learned of the National Veterans Wheelchair Games. “You mean I can play billiards sitting here, in my chair? Are you sure?” Adams said when told about the games and its 19 different sports.

“Novices go for free, so I went and I saw athletes using their teeth to shoot archery and adaptive equipment to shoot an air rifle. A woman who couldn’t use her entire left side because of a stroke? There she was bulls-eye on point. I thought, ‘I don’t know if they realize what they have done, but my life is about to change for the better.’”

Adams returned to Charlotte and got involved with Atrium Health’s Adaptive Sports and Adventures Program, which offers competitive sports for adaptive individuals ranging from cycling and tennis, to fitness and water skiing. It was there that Adams began playing tennis.

“It took me two years to learn to get the ball over the net. People would be out there like: ‘Aww, how nice, poor you, keep trying. Oh, you’re still out here?’ ‘Yes I am!’ I went by myself and worked on my serve over and over and over,” Adams said.

Since then, Adams has been to tennis clinics across the country, including one in Florida run by veteran, wheelchair coach and former competitive wheelchair player, Paul Walker.

“I don’t even like tennis,” Adams told CharlotteFive with a laugh. “But ever since my accident, people kept telling me, ‘You can’t, you can’t,’ and you don’t tell me ‘You can’t.’”

In addition to tennis, Adams has participated in the Adaptive Sports and Adventure’s annual Cycle to the Sea, a three day, 180-mile bike ride from Charlotte to Myrtle Beach. “It is an honor to have Twila involved in ASAP,” said coordinator Jennifer Moore. “She is a determined, positive, driven athlete. She NEVER gives up and strives to enlighten others to their potential.”

In fact, at next week’s wheelchair games, Adams is serving as a “mentor” — a word she does not like to use — to another adaptive athlete. “I said, ‘Drop the mentor/mentee thing. This woman is a college athlete, she understands nutrition, fitness, she has a 12-year-old. I am not her mentor. We are two athletes joining together to encourage and support one another.’”

Adams said her continued journey in adaptive sports would not be possible without the support of her sponsors Harmar and Penrod Medical. In 2019, she was given the prestigious Spirit of the Games Award by the National Veterans Wheelchair Games, and this year, Harmar has bestowed a very special honor on Adams, putting her image on a commemorative coin.

Harmar coins are highly coveted and given out each year during the competition. This year’s coins, featuring Adams power lifting, will be distributed to athletes who inspire or are an inspiration to others.