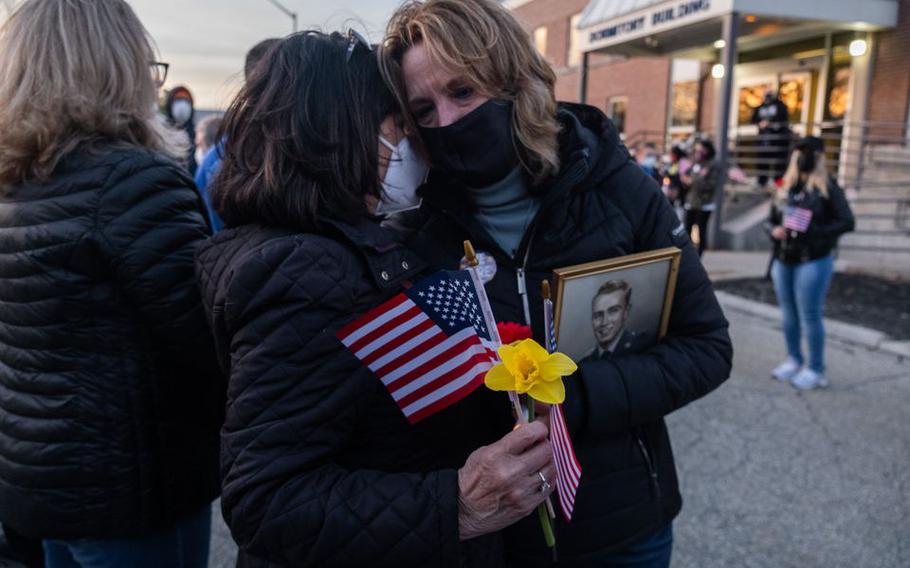 Roberta Weber-Twining (left) hugs Cheryl Turgeon during a vigil at the Soldiers' Home in Holyoke, Mass., on Tuesday, March 30, 2021. Turgeon's father, Korean War veteran Dennis Thresher, survived the coronavirus outbreak at the Soldiers’ Home in 2020 but died in January 2021. Weber-Twining's husband, Tim, is currently living at the Home. (Leon Nguyen, The Republican/TNS)

SPRINGFIELD, Mass. (Tribune News Service) — The tragedy that consumed the Holyoke Soldiers’ Home during the COVID-19 pandemic may have quieted in news headlines, but local veterans are determined to continue to honor the memories of those who died.

To that end, the Bilingual Veterans Outreach Centers of Massachusetts will make those memories the focal point of its upcoming gala.

The agency will host its annual gala on Aug. 13 at the Log Cabin. Executive director Gumersindo Gomez and supporters of the event hope to galvanize families of the late veterans to come together for the event. The agency intends to waive its $85-per-person price for tickets for those family members, Gomez said.

“There is no higher calling for us than to celebrate their lives and to extend our love and support to their family members,” Gomez said. “We are planning a very significant event.”

At least 78 veterans — a third of the Soldiers’ Home’s resident population — died of the virus or related complications last spring. The crisis prompted a gutting of its top management and criminal charges against two of its former leaders, an emergency response from the state, the convening of a special legislative committee, and plans to build a new, $400 million facility by 2026.

John Paradis, an organizer for the Holyoke Soldiers’ Home Coalition — a grassroots network of families, veterans and advocates formed in the wake of the outbreak — lauded the sentiment behind the upcoming event.

“I think August 13 is going to be a living memorial,” said Paradis, a former deputy superintendent at the Soldiers’ Home who left years before the pandemic. “Their deaths are too soon and too new to us. We haven’t had a chance to get together as a community and properly remember their lives.”

He, too, hopes word of the event reaches enough families for a meaningful turnout.

“This tells the family members that we as citizens care and we must live our lives in ways that their loved ones would have been proud of,” Paradis added.

He said Gomez has always been generous of spirit and noted that many of the veterans who died battled in the Vietnam War, as did Gomez.

The Bilingual Veterans Outreach Centers has offices in Springfield and Pittsfield. It assists veterans with more than $34 million in benefits claims, Gomez said. The agency also hosts an annual “stand down” in Springfield, connecting more than 400 veterans with goods and services including free haircuts, clothing and flu shots.

The Aug. 13 banquet starts at 6 p.m. and will feature community speakers including U.S. Army Brig. Gen. John J. Driscoll, commander of the Land Component Command of the Massachusetts National Guard.

But the special tribute to the veterans from the Holyoke Soldiers’ Home will be the highlight of the event, Gomez said.

“Our event has always been a great gathering and a great celebration but this year will be even more significant given the tragedy that occurred right here in western Massachusetts,” he said. “The men and women who died at the soldiers’ home were our loved ones and our family members, and we remember them with great honor.”