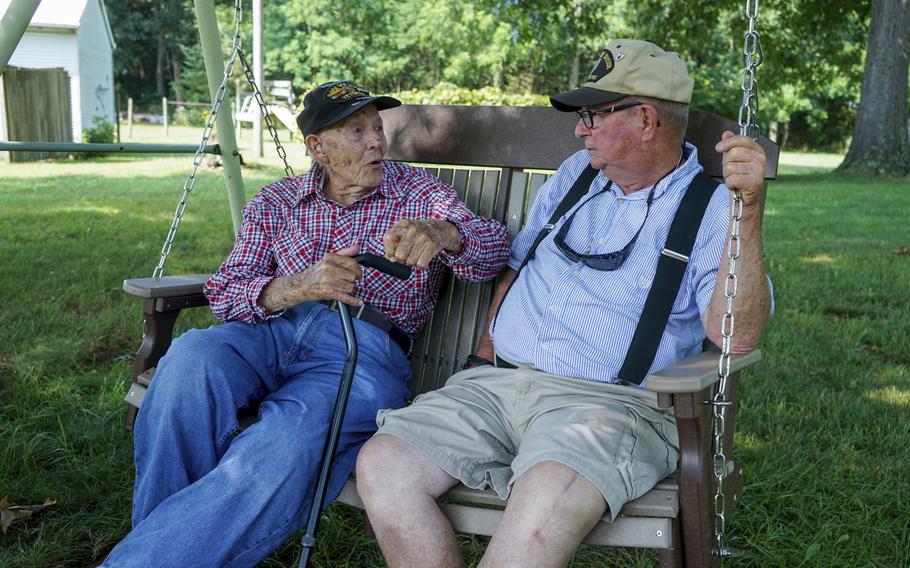 HARRISONBURG, Va. — It's been 53 years since Larry Ritchie, 76, fought as a U.S. Army private during the Vietnam War. But the experiences he recalled while sitting in his living room were as fresh as the day he endured them.

He remembered the lights and sounds of gunfire on a pitch-black night.

He remembered how hot Vietnam was; his clothes going from soaking wet to bone-dry within minutes after washing.

He remembered the expression on the face of the first soldier he recovered from the depths of the Vietnam jungle.

He remembered the pain he endured after being shot in his right hand, and the feeling of being lucky he didn't lose his hand completely.

Ritchie, a disabled Vietnam veteran, understands the challenges of living with the horrors of war and the lingering disabilities.

He doesn't do so alone.

He does it with a companion he refers to as "Pappy," but others know him as Beverly Salyards — a 97-year-old World War II veteran who survived the Normandy invasion at Omaha Beach.

"We share the connection of being in war and being wounded," Ritchie said.

Underneath a shade tree, Ritchie, of Harrisonburg, and Salyards, of Cross Keys, shared a swinging bench as they told the story of how they met and how they wished their paths could have crossed sooner.

"I wish it could have been 40 years earlier," Ritchie said.

It was more than 20 years ago, and Ritchie was attending a Disabled American Veterans meeting when Salyards walked in. 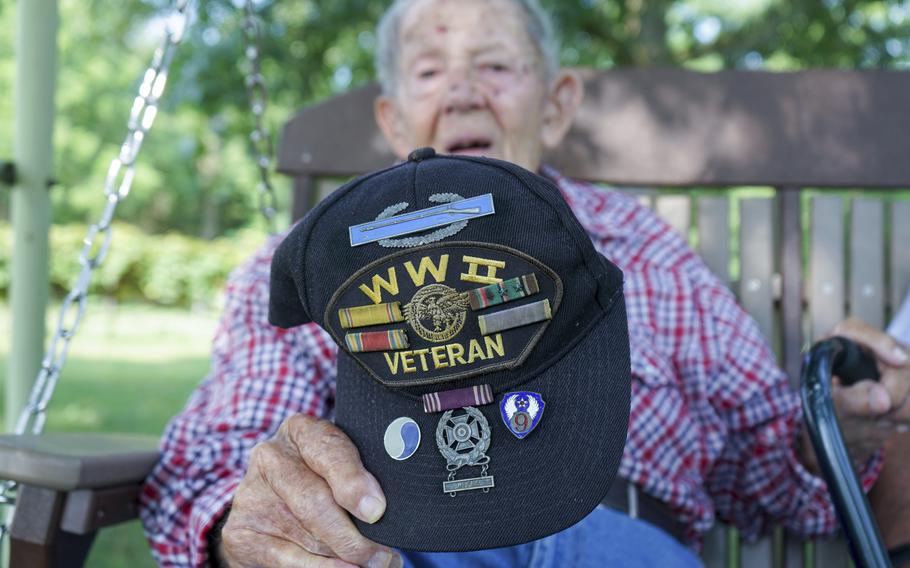 Beverly Salyards holds up his World War II veteran hat, adorned with several service ribbons and badges he earned during his time in the U.S. Army while talking about his experiences at Vietnam veteran Larry Ritchie's home in Rockingham County, Va. (Jessica Wetzler, Daily News-Record/AP)

During the meetings they attended, Ritchie and Salyards always found themselves sitting next to each other — a coincidence Ritchie credits to Salyards frequently asking him to sign his name into the meeting log.

"He always had me sign his name," Ritchie said.

Ritchie and Salyards share similar disabilities. Both had their arms and hands injured while fighting during wars.

In Salyards' case, his injury left him with extensive damage to his dominant left arm and hand.

Salyards spoke softly when recounting how he was injured during World War II, and Ritchie, sitting beside him, listened to every word.

Ritchie wanted Salyards' story to be told over his.

At the age of 19, Salyards was drafted into the U.S. Army and received his assignment as a private in F Company of the 2nd Battalion of the 17th Infantry, 29th Division — the reserve forces assigned to support the 116th Infantry.

At the age of 20, Salyards was running across the sands of Omaha Beach, Normandy, in an attempt to seize the nearby village of Isigny before crossing the Vire River.

"They said to clear the beach as quickly as I could," Salyards said. "Well, I did that."

At the time, he didn't know what lay ahead of him, Salyards said.

It had been two or three days since the 116th Infantry had invaded the beach and Salyards was aboard a landing craft with dozens of men ordered to get to Isigny. Salyards remembered seeing the landing craft in front of his drop its ramp early, and the men were left wading in 3 feet of water.

When the ramp of his landing craft dropped, he stepped onto dry sand. Salyards' feet never got wet.

He was in the first group of men to exit the craft and enter what he called "no man's land." In groups of twos and threes, Salyards said, they scattered off across the beach to clear the sand.

"We weren't under fire when we hit the beach," he said. "I got on the beach and crossed the sand without being fired upon. I was on the beach for 15 minutes before we went further inland on route to St. Lo, but I didn't make it to St. Lo."

More than a month after the invasion in Normandy, and one week after being promoted to communications sergeant, Salyards was hit by a German mortar.

"I was probably less than 4 miles to St. Lo when I caught a mortar," he said. 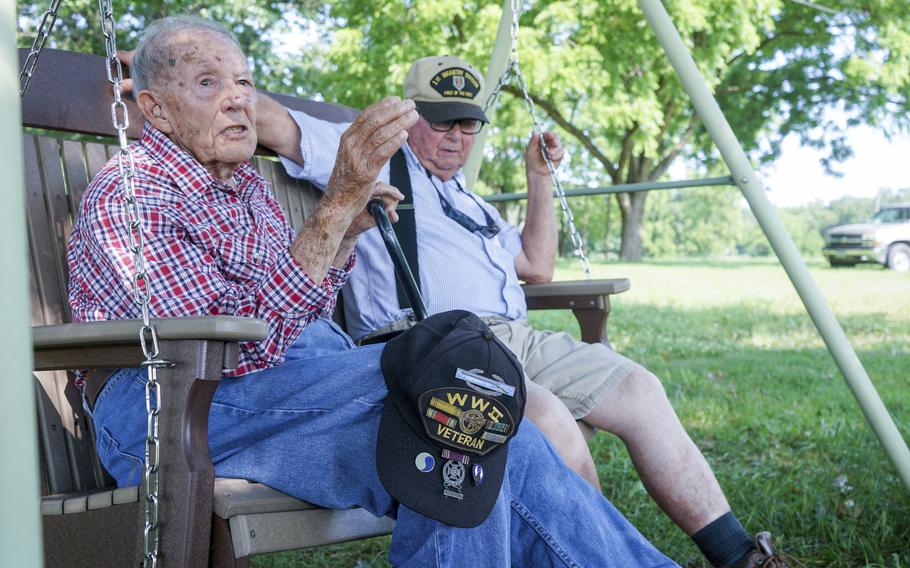 What happened next is still a blur to Salyards, who said his next memories were being carried onto an airplane and then waking up at the 116th General Hospital in Harrogate, England, with two nurses next to him.

He was in the hospital for three months, maybe four, he said.

He remembers how he flinched when a doctor began removing pieces of shrapnel from his arm and hand, and what happened next.

"Instead of throwing it in the trash, he put it in his pocket," Salyards said. "A few months later, he pulled it out and gave it to me."

With the extent of his injuries, Salyards said he was given a choice — return to his home in New Market with an honorable discharge or stay and be assigned to a limited duty service role.

"I stayed because it was the thing you should do," he said.

Salyards served as a supply sergeant with the 9th Army Air Force in France until the end of the war.

During those years, Salyards said he met a few prisoners from Poland held at his base who worked at a machine shop.

"They were just on the wrong side," he said.

The prisoners gave him an unforgettable gift.

"They said they could put the shrapnel into my dog tags," he said.

The prisoners drilled a hole into his dog tags large enough to weld pieces of shrapnel — the shrapnel once in his arm and removed by a doctor — into the tags.

Two years, five months and 30 days after he was drafted into the Army, Salyards returned home.

Decades later, Salyards found himself attending a Bridgewater Volunteer Fire Company Lawn Party, where someone he was speaking with invited him to attend a local Veterans of Foreign Wars meeting.

Not long after, Salyards was driving to a local Disabled American Veterans meeting, where he met Ritchie.

"I've enjoyed Larry's company," he said. "A lot of precious memories run in the same channel."

Both served their country overseas. Both were injured, and both sought companionship at veteran organizations.

What the two didn't expect was discovering they were distant cousins — forming a new connection.

Their sharing of memories are far from over and as Ritchie's wife, JoAnn Ritchie, said, "We've had some pretty good times together."