Shot in the head at 10 in Philly, he’s now a VA psych tech and an antiviolence activist 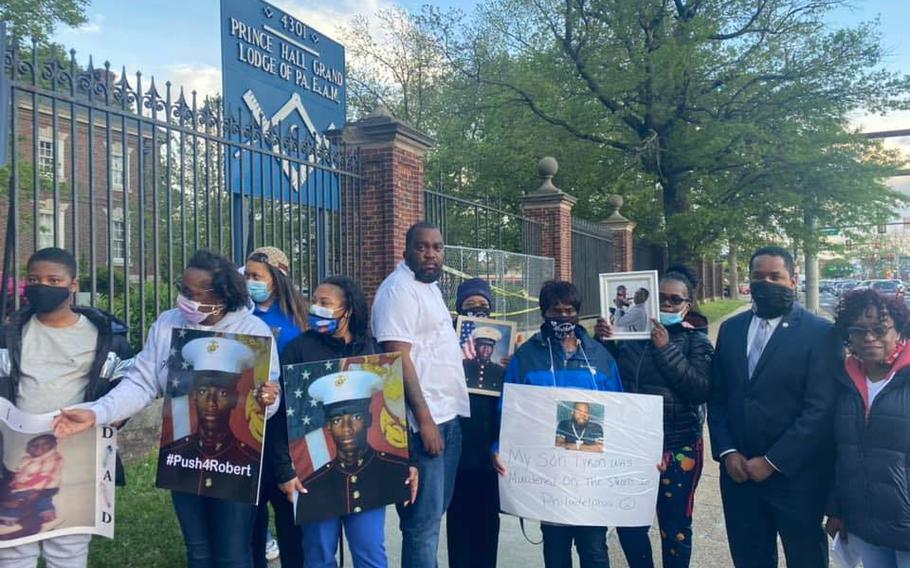 Oronde McClain, fourth from left, was shot in the head when he was 10. Now 31, he works as a psych tech at the Philadelphia VA Medical Center. (The Oronde McClain Foundation Facebook)

PHILADELPHIA (Tribune News Service) — People used to tell Oronde McClain he was blessed for surviving a gunshot wound to his head during a drive-by shooting near his East Mount Airy home when he was 10.

"They kept telling me Jesus is on my side, but how if a 10-year-old got shot in the head?" he said.

For six months after the April 2000 shooting, McClain couldn't talk. For a year-and-a-half after, he had to use a wheelchair. And for three years, he wore a white helmet to protect the soft area where the bullet entered his head and splintered into 36 fragments, which remain there to this day.

The bullet scrambled his emotions too, leaving him crying out of nowhere and feeling utterly hopeless.

He first tried to take his own life at 12. There were 26 attempts after that into his late teens.

"Everybody was normal except for me. I felt like I couldn't make it anymore," McClain said. "I felt like the bullet should have finished its job. This was more painful than death."

McClain's grandfather used to tell him that God kept him on this earth because he had something left to do, but it was up to him to figure out what it was.

Two years ago, he did.

"I tell my grandpop every single day now, 'I see what you meant,'" McClain said.

Now a 31-year-old married father of five and a psych tech at the Philadelphia VA Medical Center, McClain mentors young men affected by gun violence and holds antiviolence rallies as part of his grassroots McClain Foundation. He also speaks at schools, funerals, and community events and meets directly with gun-violence victims.

He's become what he wishes he had as a kid — a gunshot survivor who can not only relate but who believes he can make a difference.

"I got shot for a reason — to help the other people in the world," McClain said. "I teach victims how to be survivors."

With gun violence rising in Philly to near-record highs — more than 1,280 people have been killed or wounded in shootings this year, including at least 120 under the age of 18 — McClain hopes other survivors will join him on the front lines to try to effect change in the minds of potential shooters, policymakers, and the public.

"I applaud everybody that's trying to help out, but we need victims out here on the front lines to tell their stories," he said. "But they scared too. All the victims is scared."

McClain, who recently moved his family from Philly to Berks County, is scared of something else too.

"The violence feels like it's normal now, and it can't feel that way," he said.

For McClain, nothing has been normal since April 3, 2000, the night his mother sent him to a Chinese take-out restaurant on Chew Avenue near East Sharpnack Street, two blocks from their home, to wait for her girlfriend to get off the bus so he could help carry her bags.

When McClain stepped outside the restaurant to check on the bus, someone in a passing vehicle opened fire at three people standing on the corner. McClain tried to take cover in the restaurant, but someone closed the door when the shooting began, he said.

As he tried to get back in, a bullet entered the back of his head.

The shooter was never caught.

Philadelphia police officers Megan Lynch, who had just four months on the force, and Brian Hilbert, then four years into his career, responded and took McClain to the hospital themselves, a longtime practice by Philly police known as "scoop and run."

"My whole thing is, if I can get them there quicker, I don't wait," Hilbert, now a 24-year department veteran, said last week.

After hearing the call, other officers blocked off Chew Avenue, and Hilbert, who said, "I don't think I went under 100 miles an hour," got McClain to the hospital in 90 seconds.

In the backseat, Lynch hugged McClain to stop him from moving and placed her hand over his wound to stop his blood from pumping out.

"We knew it was a bullet. We could see the hole," she said. "I can see it like it was yesterday. It still makes me choke up."

Once at the hospital, McClain said, he was pronounced dead for two minutes, 17 seconds, and when he was brought back, he spent weeks in a coma. During that time, the only thing he remembers is climbing a never-ending ladder to an ineffable brightness at the top.

"The top felt so far away, but I was energized, I was determined to get to the top," he said. "Then somebody plucked me off the ladder and I woke up in the hospital."

He said doctors initially told his family that if McClain was told he'd been shot, it might bring on seizures and additional trauma. So, for about a year-and-a-half, everyone told him he'd been hit by a car.

Then one day while McClain was watching 6ABC's Crime Fighters segment about unsolved cases, he heard anchor Rick Williams say his name and ask for people to come forward with information about his shooting.

"I was like, 'That's Rick Williams! That's me! I am on TV!'" McClain said. "So they took me to the hospital and let the doctors explain."

During his recovery, McClain had to relearn how to walk, talk, and write left-handed, since the right side of his body remains partially paralyzed. He underwent five surgeries, spent six months at Children's Hospital of Philadelphia, a year in an inpatient rehab, and endured years of painful physical therapy and mental anguish.

While he was in the hospital, Hilbert and Lynch visited McClain often, and remain in touch with him to this day. Hilbert attended the baby shower for McClain's youngest son recently, and Lynch, who is now a detective sergeant in the District Attorney's Office, still carries a grade-school picture of McClain in her wallet. Lynch said she's impressed but not surprised by McClain's activism.

"There's no better person to do it but a survivor himself," she said. "I don't think of him as a victim, by any means. He's a survivor."

McClain is currently partnering with Douglas Rucker, executive director of the Chew and Chelten Community Development Corporation, to engage young people in a musical called “Yo! Put the Gun Down!!! (A Hip Hop Symphony),” which is set to premiere in November.

Aside from speaking directly with gunshot victims and leading antiviolence rallies, McClain also mentors a group of five young men who've lost siblings to gun violence in Philly. He hosts group chats, takes them to barbecues, and helps them write rap songs to process their trauma, which they then perform at a recording studio.

"I take them to the studio because they all want to rap, but they don't want to tell you their problems," McClain said. "But if you listen to their songs, they tell it all. You can hear the pain and suffering they have."

McClain funds most of his grassroots work with donations and money he makes as a per diem psych tech at area hospitals and as a full-time psych tech at the Philadelphia VA Medical Center.

"I wasn't never in the Army, but we have similar stories,” he said. “They have breakdowns and they have PTSD too. I feel comfortable there because they have the same issues I have."

Gabrielle Sinclair, McClain's supervisor at the VA, said he puts patients at ease and veterans often ask for him when they return.

"When somebody comes in a hospital and asks for you by name, that's everything," she said. "Oronde can do something that none of us can do, he can relate. He impacts those vets so much and they connect with him."

Five years ago, McClain reconnected with someone else very special, Shardae Anderson, who was his classmate in fourth grade at Emlen Elementary School when he was shot. The two found each other on Facebook and Anderson made McClain wait six months before she said yes to their first date.

"I remember talking about gun violence in class as a kid and how he got affected by it. It was just terrifying," Anderson said. "When I saw him again I just thought, 'Wow, he improved so good. This is such a blessing.'"

Two years ago the couple married, and they now share five children, ages 13 years to 8 weeks. McClain said Anderson "is my motivation" and she's always encouraging him to push on in his antiviolence work.

The couple are so dedicated to curbing Philly's violence that McClain left the delivery room while Anderson was in labor this year to lead a prescheduled rally of 300 people.

"It was kind of tough, but I knew it was for a good cause," Anderson said. "I always say to him, 'You gotta tell everybody your story' because maybe then the shooters will finally think, 'Well, this is how it could affect someone else.'"

For McClain, the lasting effects of his shooting include partial paralysis, ongoing nightmares (he sleeps for only 2 1/2 hours a day), and PTSD.

Yet he remains committed to his antiviolence work because each gunshot victim he hears about in Philly — especially the kids — reminds him of his own shooting all over again.