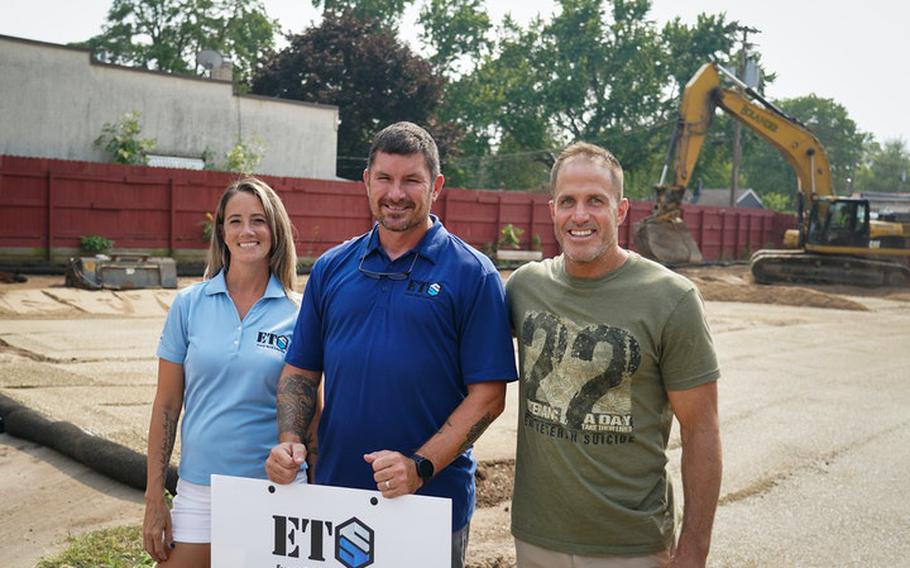 Jessi and Tom McKenna, co-founders of Every Third Saturday, and Jon Engfer, program director, stand on the corner of what will become the new headquarters building in Minneapolis. Tom McKenna, a Marine Corps veteran with PTSD, founded Every Third Saturday more than a decade ago to help other struggling military veterans. This week (Thursday at 10 a.m.) the organization will hold a groundbreaking for its new building near the Minneapolis VA. (Shari Gross, Star Tribune/TNS)

MINNEAPOLIS (Tribune News Service) — When he's working with homeless or struggling military veterans at his Minneapolis nonprofit, Every Third Saturday, there's a phrase Tom McKenna uses often. That phrase is "lethal absence of hope." It was coined by a Los Angeles priest who works with former gang members, and it is exactly what McKenna wants these veterans to avoid.

"That's where suicide occurs — when there's nothing left and you have no hope," said McKenna, himself a Marine Corps veteran who has struggled with addiction and post-traumatic stress disorder from his time in the military. "If you're on the street, you may not have had a shower for a few days. You may not have a change of clothes. You may not have shaved. And you start to feel like you look. We don't want that."

If there's a message that emanates from the architectural renderings of Every Third Saturday's new headquarters near the Minneapolis VA Health Care System, it is this: There still is hope, and that hope can be found inside, where veterans can be with their own tribe. McKenna hopes to create a welcoming, alcohol-free gathering place for the modern-day veteran, trying to form communities similar to those in American Legion or VFW posts.

Located across the street from Every Third Saturday's current space, there's a big hole in the dirt where an automotive shop used to stand. A Caterpillar excavator idles near where a groundbreaking ceremony for the building is slated for 10 a.m. Thursday. By April, McKenna hopes the project — a nearly 10,000-square-foot, two-story building that will cost close to $2 million — will be open to serve veterans from across the Twin Cities. (Donated goods and services, McKenna said, will make the organization's actual cost much lower. An anonymous donor, after reading a 2019 Star Tribune article about McKenna, pledged a significant donation to get the project off the ground.)

A tentative grand opening is planned for Memorial Day 2022.

On the ground floor will be a coffee shop open to the public that will employ veterans. It'll be called Rick's Coffee Bar, named after an Air Force veteran who died by suicide after nine deployments to the Middle East. Separate from the coffee shop patio will be a private patio for veterans and their families. On the second floor will be a fitness center for veterans: space for yoga and tai chi, ellipticals, weight lifting machines, rowing machines and boxing machines. One key: The fitness room will be lined with mirrors.

"If you have PTSD, it can be very uncomfortable going to a gym like Life Time fitness," McKenna said. "No matter where you are, there's someone behind you, noises, weights dropping. It was instant anxiety for me just walking in. I'd always bring a clip-on mirror with me so I could see who was behind me."

There will be a Veterans Resource and Empowerment Center, a community space for seminars and social events and, at the east end of the building, Every Third Saturday's core mission: A store with donated clothing, blankets, footwear and hygiene goods. Veterans can visit once a month and pick up bags of free stuff.

McKenna worked with a retail designer to make sure the space looks clean, well-lit and well-organized — a proper store, not a giveaway pile.

"It's not just what we deliver but how we deliver it," McKenna said. "How does the vet feel when they leave? They feel like a charity case, or they feel empowered? Have they gained a little bit of hope, just from getting some new clothes? We're trying to infuse dignity into a process that can be undignified. We want a community feel."

That feeling goes back to McKenna's entree into this world more than a decade ago. He saw a man on a street corner with a sign: "HOMELESS VET, PLEASE HELP." McKenna ignored him. Later, he felt wracked with guilt. He went back the next day. The same man was standing at the same intersection. McKenna asked what the man needed: "Underwear and socks," the man said, so McKenna took him to a Walmart. To McKenna, the underwear and socks came to represent dignity. That became a core part of the organization he later founded, which began with McKenna handing out free quilts and clothes in the VA parking lot on the third Saturday of every month.

The work can be a grind of stops and starts. Just last week, McKenna learned that a young man who had been involved in a 12-week course intended to give struggling veterans a fresh start relapsed with drugs in week 11. Not long ago, a veteran who'd served in Iraq and Afghanistan — young, good-looking, intelligent, everything seemingly going for him — just stopped showing up at their building. McKenna made a few phone calls and learned the man had killed himself.

McKenna's out to make sure the next veteran considering that path can find a different path, one with more hope.

"This whole thing is about community," he said. "It's about rediscovering your tribe. When you find yourself out there on your own, that's when things go to (crap). You isolate. You withdraw. This is about the opposite: A safe place, sober place, no judgment."

The expected $400,000 operating budget will be paid for through grants, fund raising events, coffee and merchandise sales and donations.

The bigger goal is to assure struggling veterans, particularly those who served in Iraq and Afghanistan, they are not alone.

"There are other people who have been where you have been," said Jon Engfer, Every Third Saturday's program director. "If they can do it, you can do it."