At 98 and facing cancer, Bob Dole reckons with legacy of Trump and ponders future of GOP 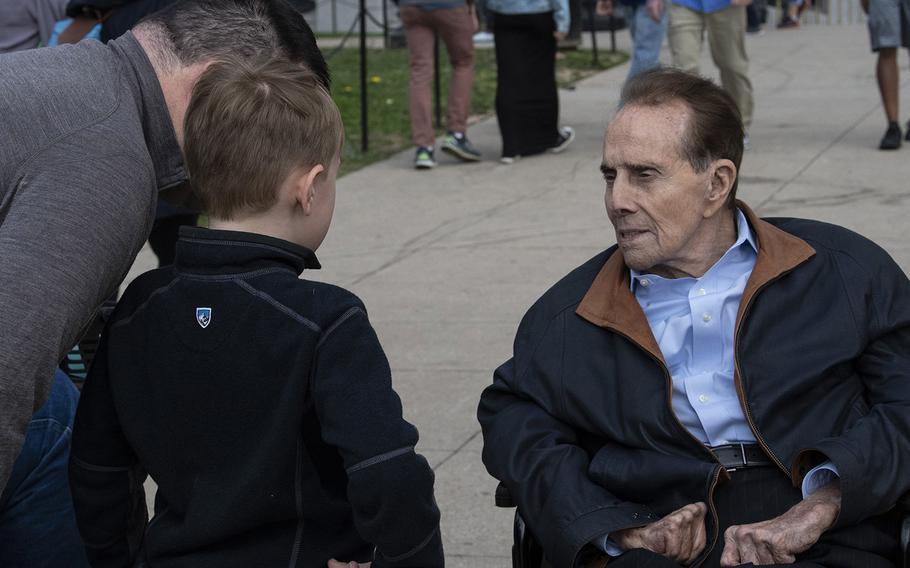 (Tribune News Service) — Bob Dole turned 98 years old Thursday and is battling lung cancer, but he is still outspoken about what’s going on in the Washington he once helped lead — from the Keystone Pipeline to the need to protect the Senate filibuster.

“Both sides use it,” the former Senate majority leader noted of the parliamentary rule, then praised “the guy from West Virginia“ who is defending it. That would be Democratic Sen. Joe Manchin. Dole decided on the spot that he’d like to meet Manchin — to invite him over for a chat, no big agenda, across party lines. Like the old days.

“I keep fairly busy,” Dole said during a 45-minute interview in his apartment in the Watergate complex, and he has more things he wants to do. He hopes to regain enough strength to make “one more trip home,” to Kansas, to visit the Veterans Affairs medical center in Topeka and meet with students at the University of Kansas’ Dole Institute of Politics in Lawrence.

When he blows out the candles on his birthday cake — at a celebration hosted by his wife, former North Carolina senator Elizabeth Dole, and joined by a dozen or so friends — he’ll make a wish for “pretty good health” for a while longer.

Robert Joseph Dole has had no shortage of health challenges, beginning with the grievous wounds suffered on a battlefield in Italy during World War II. They cost the 22-year-old second lieutenant in the Army’s 10th Mountain Division the use of his right arm and nearly his life. Early this year, he was diagnosed with stage 4 lung cancer and started a regime of chemotherapy “that was about to kill me.”

Now he’s receiving immunotherapy instead, less effective in fighting the disease but easier for him to tolerate. The day after a treatment at Walter Reed National Military Medical Center, he rested in a hospital chair, using oxygen, his breath sometimes labored but his mind clear and memory sharp.

Dole has held many of the jobs that matter in Washington politics. He was a member of the House and chair of the Republican National Committee. A senator and, ultimately, the majority leader. A nominee for vice president (as Gerald Ford’s running mate in 1976) and, after his third bid for the top job, the nominee for president, in 1996.

He was one of the few elders of the traditional Republican establishment to endorse Donald Trump in 2016 and the only former presidential nominee to attend the convention that nominated Trump. In a split with the 45th president, Dole said there’s no question that Trump lost his reelection race in 2020 — narrowly perhaps but fair and square.

“He lost the election, and I regret that he did, but they did,” Dole said. “He had Rudy Giuliani running all over the country, claiming fraud. He never had one bit of fraud in all those lawsuits he filed and statements he made.”

“I’m a Trumper,” Dole said at one point during the conversation. But he added at another, “I’m sort of Trumped out.”

In his day, Dole was known for a quick wit and a sharp partisanship, defending President Richard Nixon during the Watergate scandal and controversially citing “Democrat wars” during the vice presidential debate in 1976. His tone is mellower now, and the proudest achievements he cites are those he won in partnerships with Democrats.

He and New York Sen. Daniel Patrick Moynihan forged a bipartisan compromise to extend the solvency of the Social Security system in 1983, and he and Massachusetts Sen. Ted Kennedy worked to pass the Americans with Disabilities Act in 1990.

That willingness to have a conversation, make a compromise, reach a deal seems elusive these days, he worries.

“I don’t like to second-guess, but I do believe we’ve lost something,” he said. “I can’t get my hand on it, but we’re just not quite where we should be, as the greatest democracy in the world. And I don’t know how you correct it, but I keep hoping that there will be a change in my lifetime.”

When Dole’s cancer diagnosis was announced in February, President Joe Biden dropped by the apartment to visit, bringing several of his grandchildren and staying for an hour and a half. The two men served together in the Senate for nearly 24 years — Biden as a Democrat from Delaware, Dole as a Republican from Kansas.

“A great, kind, upstanding, decent person,” Dole said of Biden. Even so, he said the new president is leaning too far left these days, and he chided Biden about the Keystone Pipeline. “I asked him, I said, ‘Why did you close that pipeline in ( South) Dakota?’”