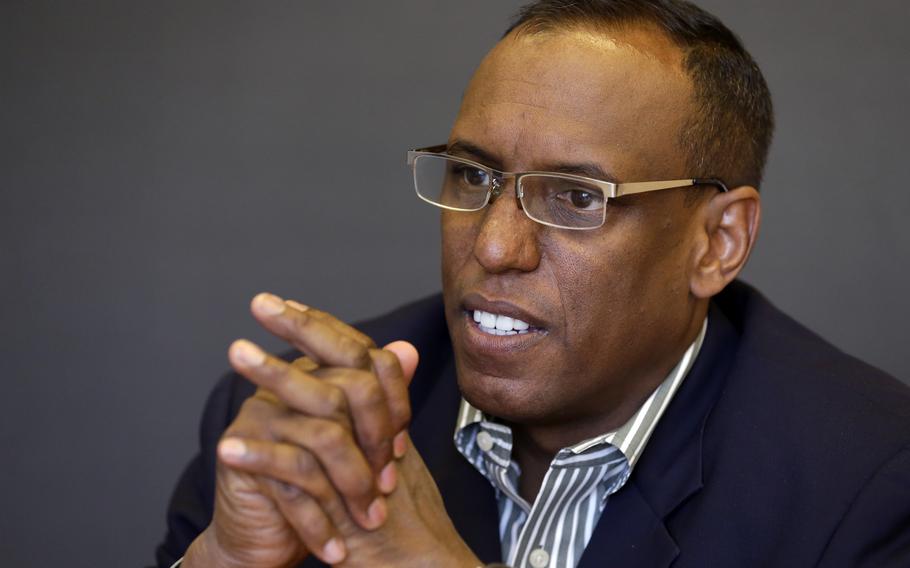 Then-NCAA chief legal officer Donald Remy speaks during an interview in Indianapolis on May 6, 2015. The Senate on Thursday voted 91-8 to confirm Remy, a former U.S. Army captain, as the deputy secretary of the VA. (Michael Conroy/AP)

WASHINGTON — The Senate on Thursday confirmed a former leader of the NCAA to take the No. 2 position at the Department of Veterans Affairs.

The Senate voted 91-8 to confirm Donald Remy, a former U.S. Army captain, as the deputy secretary of the VA. Remy worked as the chief operating officer and chief legal officer for the NCAA.

“As VA’s second-highest leader, he will be responsible for coordinating its work with the Department of Defense on critical issues including toxic exposure and the transition from service member to veteran, as well as overseeing implementation of its new electronic health record,” said Sen. Jon Tester, D-Mont., chairman of the Senate Veterans’ Affairs Committee. “I look forward to working with him in this new role to address these and other issues.”

The vote on Remy’s confirmation was delayed for two months by Sen. Marsha Blackburn, R-Tenn., who said in June that she was blocking the confirmation for Remy and three other key VA nominees because she was frustrated with the department’s feedback about a piece of legislation.

The hold was lifted in late June for the other nominees, and they were confirmed by the Senate. VA Secretary Denis McDonough lobbied senators in recent weeks to confirm Remy, particularly because of recent challenges with the department’s project to overhaul its electronic health record system, which the deputy secretary is supposed to lead.

“We think that the nominee has demonstrated his capability, his management chops, and we’d really love him to be on board,” McDonough told reporters earlier this month.

Sen. Jerry Moran, R-Kan., ranking Republican on the Senate Veterans’ Affairs Committee, said Wednesday that the issue with Blackburn’s hold had been resolved.

Blackburn cited frustrations on the Senate floor in June about the VA’s lack of feedback about the Cost of War Act, which would extend disability benefits to veterans of all eras who suffer the effects of toxic exposure. She said she would stall Remy’s nomination until the VA responded in a sufficient way.

However, Blackburn told Military Times on Wednesday that she was against Remy’s confirmation because of his work at the NCAA. She didn’t cite specific concerns.

As the top in-house lawyer with the NCAA, Remy was part of a long-running legal battle about paying college athletes. In June, the U.S. Supreme Court decided against the NCAA and ruled that some athletes could be paid for certain educated-related expenses. The NCAA is still in debates over whether student-athletes can be paid for the use of their names and images.

At the NCAA, Remy earned an annual salary of more than $1.8 million, according to Bloomberg Law. As deputy secretary, his income will be about $180,000.

Before working for the NCAA, Remy was a partner at the law firm Lathan & Watkins, and he also served as deputy assistant attorney general for the Department of Justice. During his military career, Remy worked as assistant to the general counsel for the Army. He also served as a law clerk in the 6th U.S. Circuit Court of Appeals.