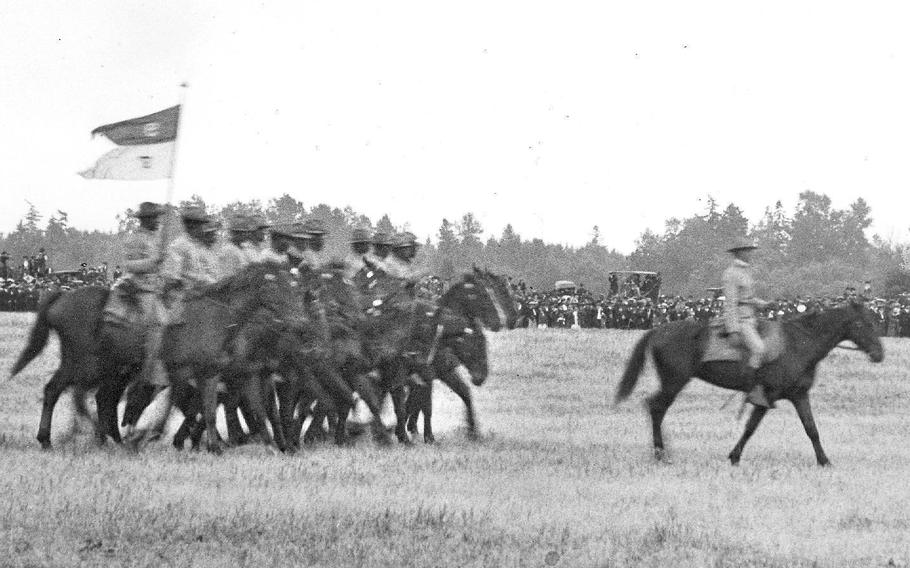 Black troopers from the 9th Cavalry Regiment pass in review following the American Lake Maneuvers of 1904 on what is now Fort Lewis. In the decades following the Civil War, the black regiments, known as Buffalo Soldiers, had a reputation for being among the most professional and well-trained in the Army. (JBLM Army Museum)

The memorial was unveiled at a May ceremony and celebration in the historically African American neighborhood at East 36th Street and South Kino Boulevard.

It pays homage and tells the history of the all-Black cavalry and infantry regiments that were established by Congress in 1866. Four regiments — the 9th and 10th Calvary Regiments and the 24th and 25th Infantry Regiments — were all stationed at Fort Huachuca.

Highlighted among its history are 18 Buffalo Soldiers who received the Medal of Honor, the nation's highest military honor awarded by Congress. The medal recipients in Arizona were Sgt. Benjamin Brown, Cpl. Isaiah Mays and Sgt. William McBryar.

"The memorial is a great piece of history. We are trying to tell a story so visitors get a sense of the Buffalo Soldiers, and what they went through during a time of segregation in the military, and their work in settling the West and Southwest," said Covington, co-chair of the memorial project and member of the Greater Southern Arizona Area Chapter of the Buffalo Soldiers.

The charity organization is dedicated to preserving the legacy of the Buffalo Soldiers by educating and engaging the community about the impact of these soldiers. The group raised $70,000 for the memorial, said Covington, who worked with Councilman Richard Fimbres to see the memorial come to fruition.

The memorial plaza is located at the center, 1575 E. 36th St., in Ward 5 in the South Park Neighborhood. More than $155,000 in voter approved bonds was used for the design and construction of the memorial plaza as part of a Tucson Parks and Recreation project.

Finishing touches will be completed this summer, including permanent signage and the design and installation of four flagpoles that will fly flags of the Buffalo Soldiers regiments. The area chapter of the Buffalo Soldiers will provide the flags. Digital access to historical information at the memorial plaza is another phase that is under planning, said Covington.

Covington said he and fellow members of the chapter hope to work in the future with the Pima County Public Library and potentially plan for a special section about the Buffalo Soldiers at the Quincie Douglas Branch Library.

The research section would have an extensive book collection about the regiments and other books on African American history. Some of the books would be donated by chapter members, and grant funding would be acquired to provide additional books.

"Children will visit the memorial during school field trips and we plan to work with tourism entities about attracting tourists to the site," he said.

"This memorial is a sense of accomplishment. We all worked hard to make it happen and there were some members of our chapter who passed away during this process," Covington said. "This memorial will bring the Tucson community together and it will create a dialogue between citizens and the military."