LAKELAND, Fla. (Tribune News Service) —  Andy Bosko Sr., who turns 100 years old on Sunday, sat with his family and friends Wednesday afternoon at Lake Morton Plaza, holding the framed medals he earned when he helped to save the world as part of the Greatest Generation.

Inside the frame were medals for the Asiatic Pacific Campaign, the Pacific Victory medal and the WWII Victory medal, along with marksmen badges for the machine gun and carbine rifle, for which he was an expert, and the pistol.

“I thought I’d never live this long,” said Bosko, born when Warren G. Harding was in his first few months in office, a half-gallon of milk ran 30 cents and a new home cost about $6,200.

During the war, Bosko, who served in the U.S. Army Air Force, helped to secure the Pacific Island of Iwo Jima, landing on the volcanic Island in February 1945 in a followup wave with Maj. Gen. Ernest “Mickey” Moore.

“I went over on a troop ship and had to go down ropes — a rope ladder — to get into the landing ship,” Bosko recalled, saying they slogged through several feet of water in full battle gear to reach the beach. “As soon as I landed, the shells were going over. I didn’t think I’d ever come back.”

Bosko said he spent the first few weeks on that desolate island sleeping in a foxhole, using his packed duffle bag as his protector because the Japanese would come out of their caves at night and attack the soldiers.

“They used to sneak in and cut the guys’ throats and you wouldn’t know it,” he recalled. “I didn’t think I’d ever come back. I did pray to God.”

He once saw a jeep hit a mine and watched as a soldier was thrown from the explosion. The man sustained serious injuries and had to be evacuated to a ship for treatment. Bosko wrote a letter to his wife, Sophia, whom he had met at the Sears and Roebuck store in Warren, Pennsylvania, telling her she was a good wife and asking her to take care of herself and their daughter.

“When I first saw her, I saw this beautiful lady and I thought I wanted to meet her,” Bosko recalled Wednesday. He worked with Sophia’s sister and offered to take them both to a dance. When the pair got into the car, Sophia’s sister sat next to Bosko and he said, “Oh, no — I want the other lady to sit next to me.” 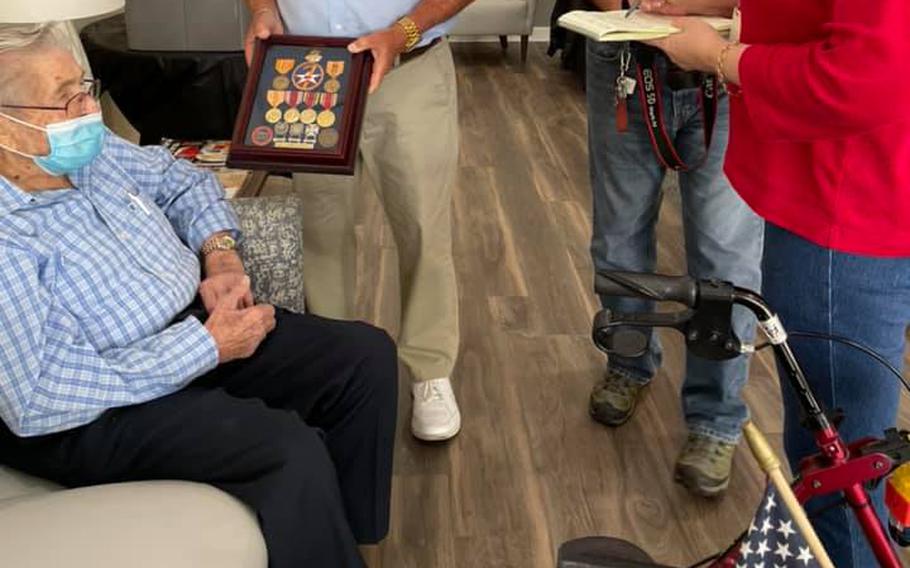 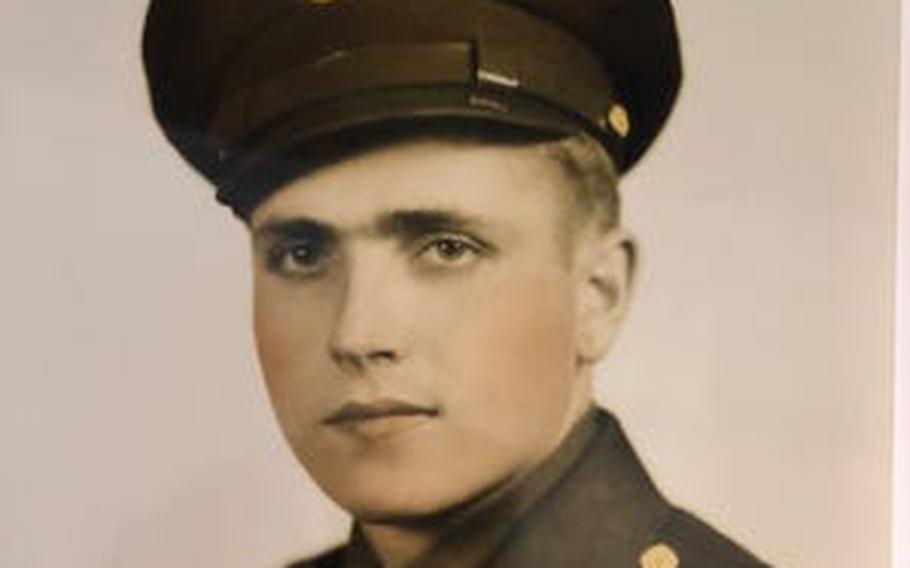 They married in 1942 before he was shipped out.

When the war ended in August 1945, Bosko returned to his wife and daughter in Pennsylvania. The couple had four more children — all boys — and Bosko landed a job at Blackstone, a national forge, becoming a machinist and working his way up to foreman. He worked there for 35 years.

While working his fulltime job, he also opened several businesses, including an oil company, the Bar B Restaurant, and Bosko Water Company.

He retired and in the mid-1980s, after visiting his son, Don — owner of three Beef O’Brady’s in Polk County — and enjoying the warm weather, he and his wife decided to move to Sun City Center. They participated all kinds of activities and made new friends. But in 2015, when Sophia’s Alzheimer’s worsened and Bosko developed dizziness and had to give up his driver’s license, they moved to Lake Morton Plaza, an assisted living facility at the corner of Lime Street and S. Florida Avenue.

He lost the love of his life in 2017 when she was 94 years old — just two weeks shy of their 75th wedding anniversary.

“She was a wonderful, wonderful wife — very good for me and the children,” Bosko said. When asked if he had a girlfriend now, Bosko said, no. “My girlfriend is up in heaven. I miss her and say a prayer for her every day.”

Of, course, he has seen many changes in his lifetime — men landing on the moon, the rise and decline of U.S. industrialism, and partisan bickering so volatile that insurrectionists stormed the U.S. Capitol in January.

“I think it’s terrible,” Bosko said. “They should get along no matter what party they’re in like they did years ago when they were making the Constitution... This is a beautiful, wonderful country.”

Bosko spends his days doing as many activities as he can at Lake Morton Plaza, which offers a full schedule of entertainment and exercise. He plays the Wii bowling video game, walks as often and as far as he can go in the building, and does puzzles in his apartment to keep his mind sharp.

When asked what his secret was for a happy marriage, Bosko gave a recipe for a successful life:

—Do the best you can

—Obey all the laws

—And take your family to church.

Don Bosko said he is amazed his father is hitting the centenarian mark this week.

“He works real hard at it, he exercises a lot and keeps himself sharp,” the younger Bosko said. “He’s involved in the Plaza — they call him the ‘social director.’ If you’re new, he’s going to be at your table and make you feel comfortable.”

“Andy is one of the few remaining heroes of the Greatest Generation who served on active duty during World War II,” Clark wrote in an email to The Ledger. “His Pacific Theater service with the 7th Fighter Command contributed to the success of that Campaign. Those of us who served in later periods stood on the shoulders of World War II Heroes like Andy Bosko.”

During the COVID-19 pandemic, Lake Morton Plaza residents had to remain inside their apartments and wear masks if they had to leave for a doctor’s appointment. Like any good soldier, Bosko followed orders and survived.

“You just had to stick with the regulations,” he said. “It was kind of hard, but I just figured we had to do it to be safe.”

He said there is only one drawback to being this young at heart — “You can’t do the things you like to do. I can’t walk that good.”

On Wednesday, Lake Morton Plaza threw a birthday party for him and most of the residents gathered to sing to him and eat cake with him. He clapped and blew kisses to the residents as singer Deborah Mims crooned “Hey good lookin’, Whatcha’ got cookin’?” a hit from the 1950s. She also flirted a little with the soon-to-be 100-year old.

Mims asked him how it feels to be 100 and Bosko, grateful to have one more chance at a happy day, answered, “It’s another day.”

On Sunday at the Grasslands Country Club, Bosko’s children — Carol, Don, Thom, Andy, and David — along with most of his 18 grandchildren and 30 great-grandchildren will gather for a family party. 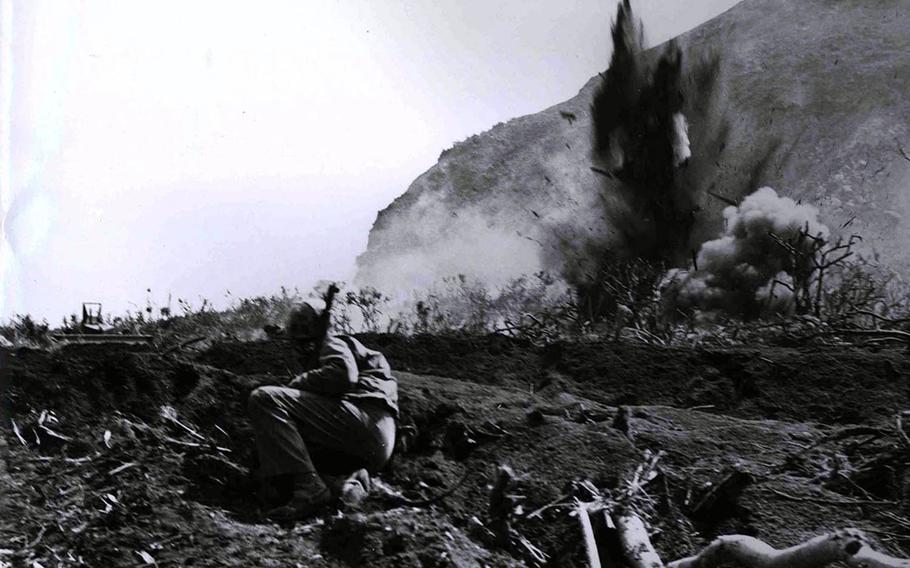 A Japanese position at the base of Mount Suribachi is eliminated by a high-explosive charge set off by the invading Marines during the Battle of Iwo Jima in this undated photo from 1945. (National Archives)