Gandolfo, a Marine Corps sergeant, and Gallatella, a corporal in the Army, started talking about their service, and realized they had served at the exact same time, in many of the same places. Both fought in heavy combat, nearly from the moment they landed in South Korea in 1951.

Gandolfo has received numerous commendations for his service, and remains dedicated to the armed forces. A Canaan resident, he’s a life member of the Veterans of Foreign Wars and the 1st Marine Division, the unit in which he served.

Gallatella is a recipient of the Bronze Star, for capturing the enemy, and attends the ceremonies and recognition of his fellow soldiers. When he met Gandolfo, he said, he immediately recognized him as a hero.

“Nick’s my hero, and he always will be,” said Gallatella, who identifies himself as “Cpl. Mike.” “He’s seen a lot. He’s seen more than a lot of people.”

“So have you,” his friend replied as the two had lunch at Cristy’s restaurant on Winsted Road. “We’ve all seen a lot. War is hell — I don’t care what anyone says, or who you are. It’s hell.”

Gandolfo enlisted in February 1951. After his basic training at Parris Island, S.C., he sailed from California to Incheon, South Korea. The day he landed, he heard artillery and mortar fire in the distance.

“We headed right out,” he said. “Every day, we pushed the enemy back, and the war would have been over, but MacArthur wanted to keep going. We had (the North Koreans) beat until China got involved.”

Gallatella also enlisted in 1951, and shipped out from Fort Dix, N.J., after his basic training. He was in the infantry and saw much combat.

“We were face to face with the enemy,” he said. “It was brutally cold, and we didn’t have the gear we needed. We had no idea it was going to be so cold — 40 below zero, sometimes more.”

“So many of the wounded froze to death,” Gandolfo said. “I’ll never forget seeing the frozen bodies loaded on a truck, of guys who had died before they could get help. I had frostbite on my face, my ears, my fingers. ... Yeah, it was pretty cold.”

The weather didn’t stop the fighting, though. Gallatella remembers seeing many dead North Koreans and Chinese soldiers, and says he killed quite a few himself.

“At the time, we looked at them like they were monsters and they had to be destroyed,” he said. “We were fighting for our country, for the people of our country, and they were trying to kill us.”

“They were probably told if they didn’t fight, their families would be killed,” Gallatella said. “They didn’t care, they were forced to fight. We were there because we volunteered. There’s a big difference.”

Both men were stationed on the front lines much of the time, living in bunkers and foxholes and waiting for the next attack, or planning their own. Both fought in the Battle of Chosin Reservior, a “no man’s land” of empty space overrun with soldiers, Gandolfo said.

“It was like a slaughterhouse,” he said. “You can’t imagine what it was like to see them coming.”

Ice-cold temperatures, unsuitable clothing and no showers for three months at a time was typical, Gallatella said, and made everyone wish for home. He remembered being given five days of R&R (rest and relaxation) in Tokyo, and not wanting to go back to the fighting. “You go from all that luxury and fun, back to the line,” he said. “A lot of guys deserted. They didn’t want to go. I went back, but it was hard.”

In October 1952, Gandolfo and his unit were in the Battle of the Hook, and were ordered to “take it back.” According to nationalinterest.org, the Hook was a strategic piece of land “shaped like a thumb” with steep sides that had to be defended to head off the Chinese. The Hook was overrun by enemy soldiers at the beginning of October, in a fight that lasted nearly a month. It has been called one of the war’s bloodiest battles; the Marines and Army were outnumbered by enemy soldiers.

“My machine gunner got hurt really bad during that time, and I carried him, I don’t know how far, to a hospital ship,” Gandolfo said. “For 27 years, I thought he was dead, and one day I’m in a hotel in Missouri and a guy in a wheelchair said, ‘I know you.’ I didn’t recognize him at first, but when he said his name was Roy Hines, I lost it. We hugged and kissed. I was so amazed.”

Another time, as bullets were flying around him and fellow soldiers, Gandolfo turned to a lieutenant and told him to get inside their bunker. The lieutenant responded, “I’m all right,” and a moment later was shot and killed by a sniper.

“I went ballistic,” Gandolfo said. “I just started shooting all over, and I hit the sniper. Two months later, I was with my unit and told to fall out. I went front and center, and a general decorated me for shooting that sniper. He shook my hand. I’ll never forget that. After that, they started calling me Sgt. Badass.”

Gandolfo was sick with pneumonia in December 1952, and was at an aid station and then a hospital, where he stayed for nearly a week. He recalled meeting famed baseball player Ted Williams, who was serving as a fighter pilot. “They told me he was going to share a room with me, but he complained about rooming with an enlisted man, so he didn’t stay with me after all,” he said.

“After a week, I was sent back on the line,” he said. “I thought maybe I was going home, but it was back to the outfit.”

Gallatella came down with bronchitis, and was hospitalized for five days before returning to service. It turned out that many soldiers caught pneumonia and other respiratory illnesses and were hospitalized, but they were strong and recovered quickly, Gandolfo said. “Back we went,” he said. “No going home yet.”

The memories remain fresh in their minds, and there are stories they keep to themselves, “because they’re just too horrible,” Gandolfo said. “It would turn your stomach, some of the things we saw other there.”

Gandolfo recalls hearing about the cease-fire between the two countries on his way home to the States. “We made an awful lot of noise when we heard it,” he said. “When I got back to California, it was terrible. There were people there who were calling us baby killers, but our commander told us to keep our hands in our pockets and not say anything. So we did that.”

“My ship sailed home and hit a typhoon,” Gallatella said. “We were all so sick. ... But when we got home, there was a band playing and people were waving at us.”

After returning to the States, Gallatella was enlisted to participate in experiments involving the atom bomb, to see the effects of the radiation on people. “We were human experiments,” he said.

He came home to Torrington and tried to recover, he said. He got his high school diploma and went to college using the G.I. Bill. Eventually he got a job with the Metropolitan Water District in West Hartford, where he worked for 30 years. He has published four books, and donated the proceeds to the Veterans Service office in Torrington.

“I was a truck driver,” Gandolfo said. “I hauled fertilizer to New York, Massachusetts and Connecticut. I enjoyed it. I’m also very active with all the military groups in the area. I’m a past commander at the post in Canaan; right now I’m the sergeant at arms.”

Both veterans proud of what they did and have no regrets. Both want to visit South Korea again someday.

“Mike and I talked about going back; we’d like to see it again,” Gandolfo said. “When we were on the front line, we didn’t think so, but someday maybe we will.” 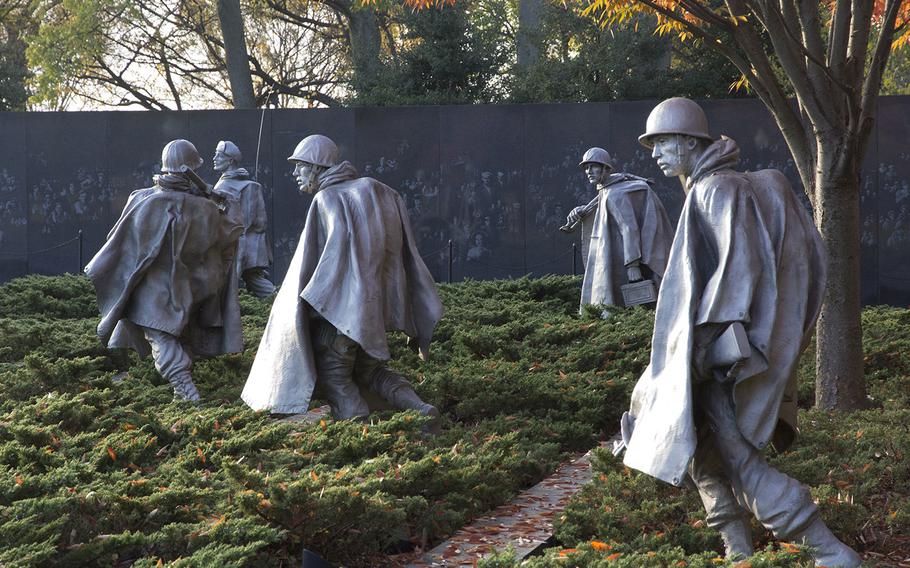