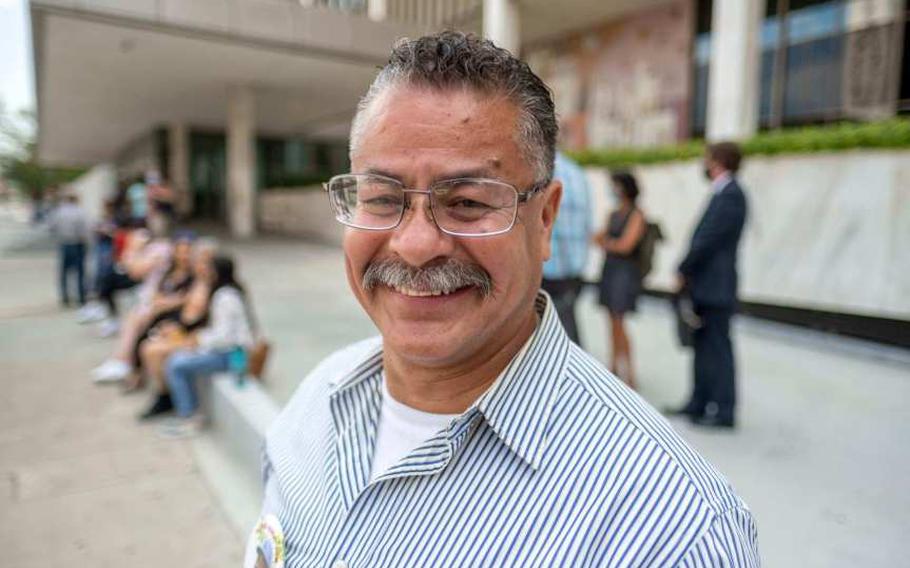 He was on the cusp of a life-changing moment.

For more than two years, Ocegueda-Rivera, a decorated Marine Corps veteran from Artesia deported to Mexico in 2000 because of a drunken driving conviction, has struggled to become a U.S. citizen.

Twice in 2020, U.S. Citizenship and Immigration Services officials scheduled him for required naturalization interviews in Los Angeles. However, in both instances, the Department of Homeland Security denied him entry into the country, including once when Border Patrol agents turned him away at the San Ysidro Port of Entry.

But on Thursday, a hopeful Ocegueda-Rivera, with family members standing close by, declared himself ready and eager to prove that he indeed should become a U.S. citizen.

“It’s where I belong,” he said quietly while waiting for his immigration interview to begin.

Late Thursday afternoon, Ocegueda-Rivera, 53, received word from immigration officials that his citizenship petition had been approved. He is scheduled to take the oath of citizenship Friday at the federal building.

The long-awaited meeting with UCIS officials came on the heels of a lawsuit filed by his lawyers last month arguing that if he wasn’t allowed to come to Los Angeles for an interview, then immigration officers should instead come to him at the border.

“He never should have been deported in the first place,” Helen Boyer, one of Ocegueda-Rivera’s attorneys, said Thursday outside the federal building.

Neither Ocegueda-Rivera’s drunken driving conviction nor his deportation disqualifies him from becoming a U.S. citizen, according to Boyer. Federal law permits citizenship for all eligible military veterans who have served honorably during designated periods of hostilities, as long as they meet certain requirements, including a naturalization interview.

Additionally, policy guidance issued by the U.S. Citizenship and Immigration Services says veterans residing abroad may seek to be admitted or paroled into the United States for the purpose of attending a naturalization interview and oath ceremony.

In 2019, Ocegueda-Rivera, with assistance from his attorneys, filed for citizenship and an expedited limited request for parole to ICE so he could attend a naturalization interview in Los Angeles.

After Ocegueda-Rivera’s lawsuit was filed, immigration officials quickly invited to Los Angeles for an interview. When he arrived Tuesday at the border checkpoint south of San Diego, Border Patrol agents said they had been expecting him and whisked him through.

“I was nervous,” Ocegueda-Rivera said. “It went very smooth.”

Ocegueda-Rivera was granted 72 hours to enter the U.S., attend the interview and return to Mexico.

He stayed with family members who prepped him for his naturalization exam, which included 100 questions about U.S. history and government. Ocegueda-Rivera’s 15-year-old niece, Triscilla Garcia of Chino, was his chief proctor.

Garcia said her uncle rattled off correct answers to tough questions, even knowing that Georgia was one of the original 13 colonies. “I was shocked by all of the answers he was getting right,” she said.

Ocegueda-Rivera’s own history is filled with triumph and tragedy.

He came from Tecate, Mexico, to Artesia in 1975 at age 9 when his now deceased father was offered a job at a dry cleaning business. At first, life in the U.S. was idyllic for Ocegueda-Rivera, who has a sister and two brothers, one of whom is deceased.

While attending Gahr High School, Ocegueda-Rivera, worked at In-N-Out and then for a Paramount company that made commercial fences. After his high school graduation in 1986, he briefly attended Cerritos College.

Ocegueda-Rivera joined the Marine Corps in 1987. He was stationed for three years at Camp Pendleton and then transferred to Okinawa, Japan, where he drove trucks for the Marines.

Along the way, Ocegueda-Rivera received several military commendations, rose to the rank of corporal and married his high school sweetheart. The couple, who have since divorced, have two daughters who live in California and Florida along with several grandchildren.

After leaving active duty, he honorably served in the Marine Corps Reserves from 1991 to 1995, which included duty during the Gulf War.

Ocegueda-Rivera, who now works in Tecate as a security guard at a hotel, found the transition from military to civilian life difficult. He developed a drug addiction that led to criminal convictions from 1992 to 2006 for a series of offenses, including possession or use of controlled substances/paraphernalia, possession of a firearm, driving under the influence and driving on a suspended license.

Ocegueda-Rivera said he missed the stability of the Marine Corps and was unaware of the medical benefits and support available to veterans that could have helped him.

Seeking reunification with his family, Ocegueda-Rivera twice re-entered the U.S. illegally, only to be deported again to Mexico in 2002 and 2012. During one stint in the U.S. in 2009, he checked into a drug treatment program through a local Veterans Affairs hospital. The treatment was successful and Ocegueda-Rivera has been sober ever since, says the lawsuit.

The American Civil Liberties Union of San Diego issued a report in 2016 analyzing 59 cases of veterans who had been forced out of the U.S. or were still in the country but facing deportation. In many instances, the veterans who were deported had committed minor offenses due to the difficulties of readjusting to civilian life and had paid their debt to society, the study found.

The darkest days came in February 2000, when the Immigration and Naturalization Service charged Ocegueda-Rivera with an aggravated felony for the drunken driving conviction, prompting a federal judge to deport him back to Mexico.

“When they deported me, I couldn’t believe it,” he told the Southern California News Group last month. “I cried as I crossed the border into Mexico. I felt as though I was being kicked out of my house. It was hard. I grew up in the U.S. That’s where all my memories are. I was little when I left Mexico. My whole family, everyone, is in the U.S. To me, that’s home.”

Last week, the Biden administration announced it would invite back U.S. veterans who have been deported, along with their immediate family members, and pledged to ensure that those veterans receive their benefits.

Ocegueda-Rivera’s lawsuit describes the felony charge that got him deported as a “term of art” under immigration law.

“While an aggravated felony is a bar to naturalization ... Mr. Ocegueda-Rivera has none,” the suit says. “ The Ninth Circuit and Supreme Court have clarified that convictions for driving while under the influence are not crimes of violence ... and therefore are not aggravated felonies warranting deportation.”

“It’s been a long journey for him and I am hoping that what happened today is just the start,” she said.