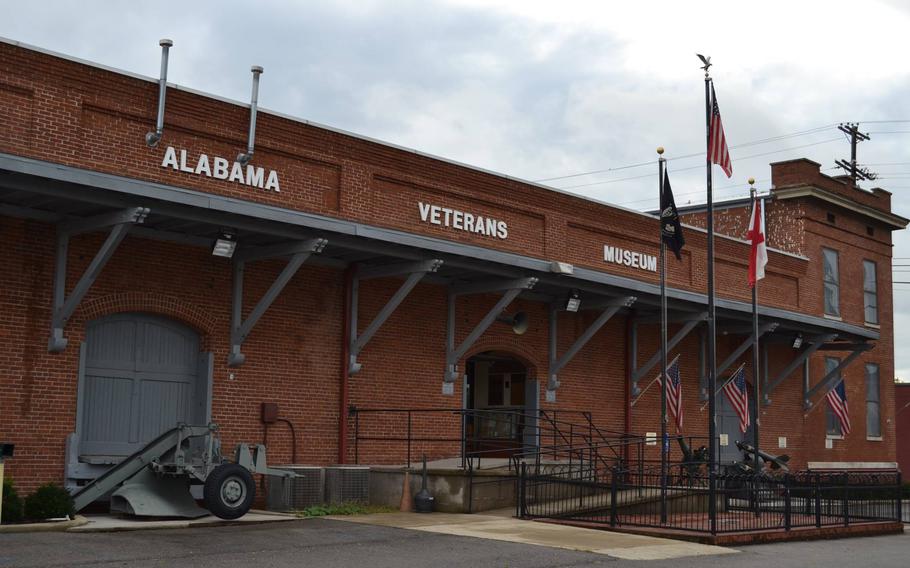 ATHENS, Ala. (Tribune News Service) — The military medals Army veteran Jim Ripley viewed recently at the relocated and expanded Alabama Veterans Museum and Archives held special meaning to him. They were his own.

Ripley was one of many who donated memorabilia to the museum, which veterans say is unique in that it focuses more on individual soldiers than on U.S. wars at large.

"I'm proud of this museum," said Ripley, of Harvest. "The people who worked the hardest to make this happen were people who were ... with people in the military, dependents and family members that really pushed to make this happen. It's amazing what they do for the veterans around here, making sure that people come in and see the equipment we used."

Photos of Ripley on horseback and on an all-terrain vehicle in the Middle East as well as his Combat Infantry Badge and Bronze Star Medal are just a few of the items in the Alabama Veterans Museum's larger collection at its new facility, which opened its doors to 550 attendees July 1 following a ribbon cutting from Gov. Kay Ivey.

"This is a very patriotic community," said Jerry Crabtree, president of the museum's board of directors.

Retired Army Lt. Col. James Walker also contributed to the museum's collection for the new space — gifting his treasured uniform, now on display clothing a mannequin — and said he was pleased to see the final product of the expansion.

"It is an amazing upgrade," said Walker, who was a JROTC instructor at Austin High School for 23 years before retiring. "This represents Alabama well, and in fact to be truthful it represents the nation well. It's a hallowed ground, a place where we can celebrate our heroes."

Crabtree said the Alabama Veterans Museum began talks of growing its space six years ago and initially anticipated adding onto the existing facility, a reconverted L&N freight depot which is a century old. It was later that the Limestone County Commission allowed the board of directors to take over the Limestone County Event Center as a new location.

"After speaking with them a couple times and talking back and forth, the Limestone County Commission 100% voted to deed us this building," Crabtree said.

Jim Watson, 78, has served as a tour guide for the museum since its original opening at its first location and said he hopes the move will allow the museum to educate visitors for years to come in a better constructed building with more storage space.

"The main thing that has really helped is more room," Watson said. "The other building had 12-by-8-foot rafters that ... were holding up the ceiling. We had so much stuff upstairs ... and no place to put it."

Kent Davis, commissioner of the Alabama Department of Veterans Affairs and an Army and Navy veteran, was present at the opening ceremony. He said he hopes the museum will be not just a tourism stop but a destination for visitors to Athens because of improvements in the new facility.

"It's important to have a museum like this and talk about the sacrifices that some of these folks made, some of them with their lives," Davis said. "I know (the original location) was getting a little cramped so this is nice that they've got more space, they can spread out a little bit and they can actually expand. It's a great example of so many groups coming together to make this happen."

Ripley said the museum has come a long way from its initial opening in 2000 and expressed optimism about future opportunities for growth because of the museum's increase to 8,000 square feet of display space.

"(My wife's) cousins were big on helping build the (original) museum," Ripley recalled. "We were still in the Army, and we came down to visit with them, and they were trying to chase pigeons out of the rafters to get this thing started."

One thing that didn't make the move from the original location, Watson said, were murals painted by local artist Karen Middleton in the restrooms that couldn't be removed as this would have jeopardized the integrity of the building. Museum director Sandy Thompson said Middleton has shown interest in painting new murals in the museum's second location.

Given the facility's previous use as an event space, Crabtree said the Alabama Veterans Museum is hoping to make use of the new building for Veterans Day and Memorial Day ceremonies as well as for other military-focused activities.

"We had 400 here for our Memorial Day program," he said. "Any good museums have a place for people to come together. That brings people into a museum."

One feature of the renovated facility is a large glass wall with a sliding garage-style door separating the display space from an event room, which Crabtree said is by design.

"We put windows in that on purpose because if you come here on Saturday night for a social event, the museum is locked down, but you can still see over into it," he said. "We're hoping that will make people think, 'Hey, I'll come see this next week when it opens.'"

The new location will also feature a virtual reality experience placing museum guests on the battlefield, which Crabtree hopes will capture the interest of younger guests.

Crabtree, an Alabama National Guard veteran who served from 1971-74, said the response to the upgraded museum has been one of "shock and awe."

"We exhibit what the soldier wore on his back in battle, the letters he got from home or wrote to home," he said. "People can relate to that and ... it brings back memories."