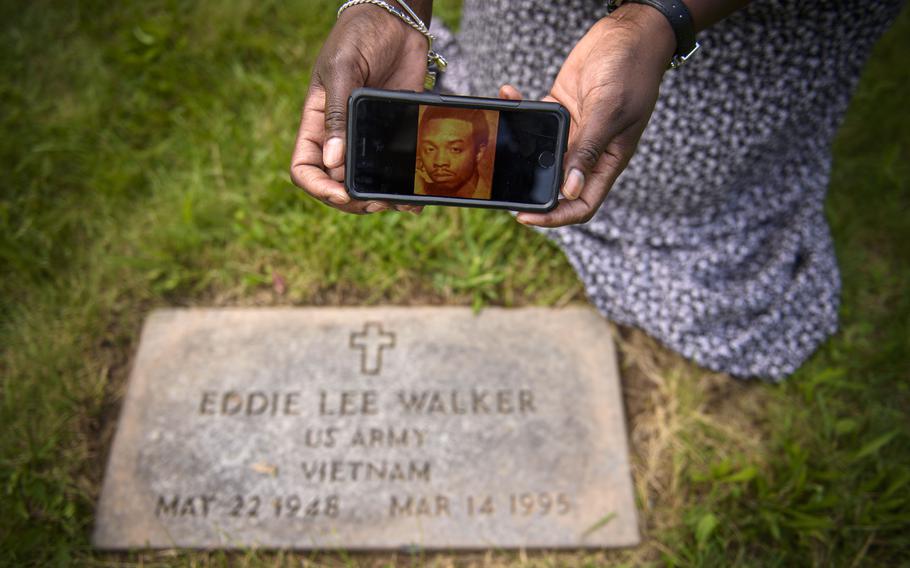 Windsor resident Sonia Turner displays a photograph of her father, Eddie Lee Walker, a Vietnam War veteran. Turner said grass was covering her father's headstone but was cleared when she complained to Hartford officials about the neglect of her father's gravesite. But while the stone of her father, a Vietnam veteran, had been raised and the grass cut away, other stones over other veterans' graves remain neglected. Turner says she won't stop pressing the issue until all the grave sites at the Hartford-maintained cemetery are treated with the dignity they deserve. (Mark Mirko, Hartford Courant/TNS)

Unlike similar stones at the Hartford-owned graveyard, however, Walker’s is no longer sunken and choked by encroaching grass and dirt.

The U.S. Army veteran’s marker was raised recently after his daughter, Sonia Turner of Windsor, complained to city officials, including Mayor Luke Bronin, that she could not find the grave.

“Is this how we treat the deceased and veterans?” Turner wrote in an email to Bronin on June 26. “I want my father’s grave found.”

Bronin replied, “I’m terribly sorry for this and for your family,” adding that he was CC’ing public works department leaders.

Turner, 47, said she’s happy that her father’s marker was raised, but she will not stop pressing city officials until all the stones get the attention that veterans and their families deserve.

“They thought I would shut up and go away, but my thing is — what about all the other headstones?” the Hartford native and one of Walker’s four daughters said.

This is not the first time people have complained about maintenance of the cemetery, which holds the remains of more than 5,000 Hartford-area veterans with service records dating to the Spanish American War.

Over the years, veterans’ relatives have cited unmown grass, grimy headstones and poor drainage, among other issues. Family members visiting graves said they would routinely find marble markers submerged in water, lying on the ground or hidden by weeds. Grass surrounds one of many veterans' headstones in similar conditions in Northwood Cemetery/Soldiers Field in Windsor. (Mark Mirko, Hartford Courant/TNS) 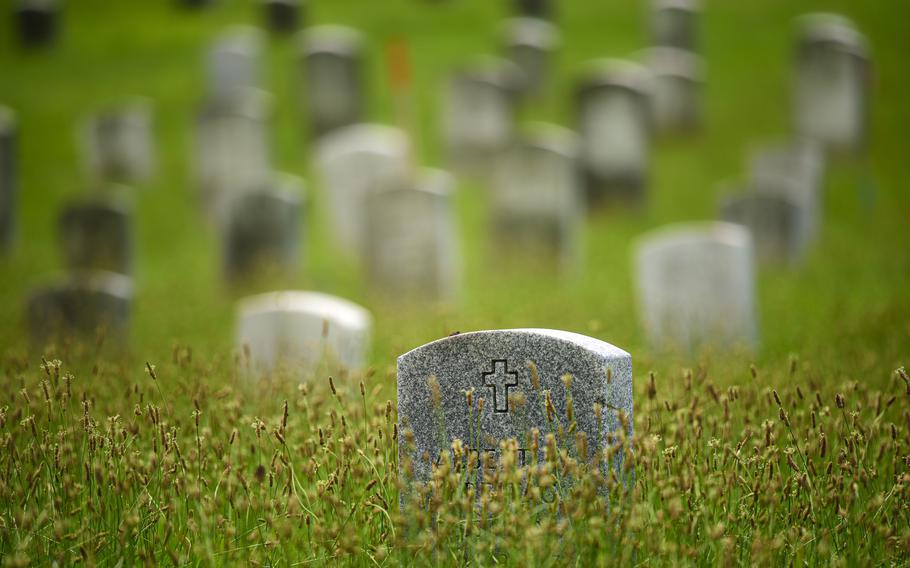 A concerted effort by volunteers and staff, starting in 2013, had the graveyard in much improved shape by late 2015, according to an article in The Courant. About 175 volunteers, including some minimum security prison inmates, had worked with the city’s cemetery crew to clean and right the stones.

City Public Works Director Michael Looney said Tuesday that partially sunken grave markers are a problem in any cemetery. Hartford’s cemetery crews spend “a tremendous amount of time just keeping up with the grass,” Looney said, and usually do not have the time to raise sunken stones, a job that can take up to two hours.

Typically, Looney said, cemetery officials refer relatives who complain about sunken stones to monument companies that can reset a marker for $100-$150. A cemetery worker raised Walker’s stone after hearing how upset Turner was about it — “because he’s a good guy,” Looney said.

That man and other workers who maintain the city’s four cemeteries “are proud of the work they’re doing,” he said.

“They’re a very dedicated group because they’re all cognizant of how graves should look for relatives and families,” he said.

If a flat marker sinks far enough, to the point where it is completely obscured or becomes a tripping hazard, the city will reset it, Looney said.

At the time of the 2015 cleanup at Soldier’s Field, outgoing Hartford Mayor Pedro Segarra said the “cemetery looks better now than it has in years.”

“This is exactly what our veterans, who sacrificed so much for our country, and their families deserve,” Segarra said.

Compared to how the city’s cemeteries looked before that turning point, Looney said, “they are in much better shape.”

Turner, however, whose father died in 1995, pointed to a banner on the cemetery fence that says, “Hartford Cherishes Its Veterans.” Sunken markers that are hard or impossible to find do not fulfill that promise, she said.