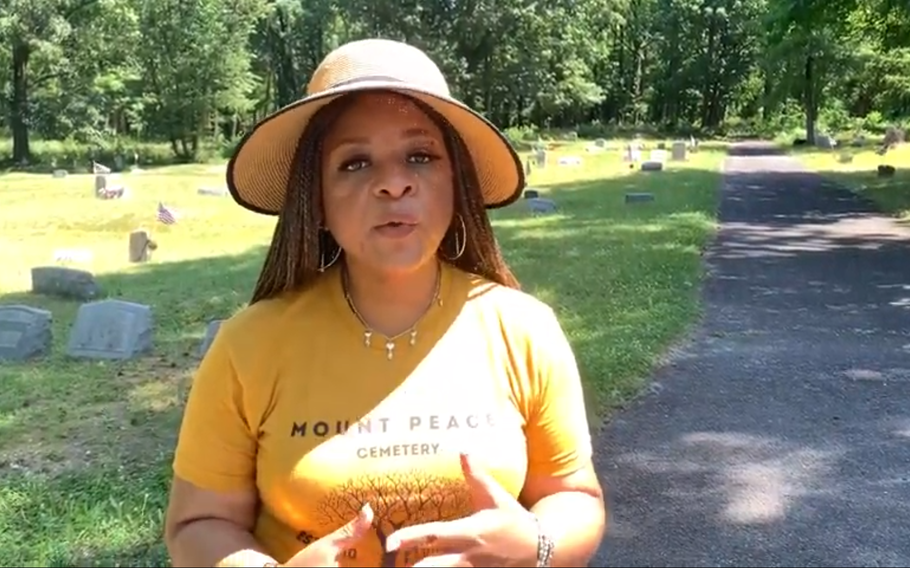 Dolly L. Marshall, who serves on the board of the Mount Peace Cemetery Association, has headed a push to preserve the cemetery in Lawnside, N.J. (Screenshot from YouTube)

They mark more than 200 newly uncovered graves in the sprawling cemetery established in 1900 as a private, nonsectarian resting place for Black Civil War veterans, former enslaved people, and those who could not be buried in white-only cemeteries.

After years of neglect, the three-acre section in the back of the cemetery was covered with thick growth and not accessible for at least five decades, said Dolly L. Marshall, who serves on the board of the Mount Peace Cemetery Association.

A band of volunteers spent the last several months clearing the area, using light equipment, rakes, and their bare hands to remove branches and vegetation to avoid damaging headstones and markers, Marshall said. Their goal was to live up to the cemetery's motto: "Uncovering hidden history one stone at a time."

"It's backbreaking work in a good way," Marshall said during a tour Wednesday.,

Volunteers found the ground around some graves sunken, headstones toppled, and inscriptions on some markers no longer legible. Some were found in pristine condition, such as one of the oldest identified as "Mother" for Mary A. Sampson, who was born in 1879 and died in 1924.

Marshall was surprised to locate the grave of a maternal uncle, Jehu O. Hegamin, who died in 1922. Two flowers inscribed on his marker piqued her curiosity and she later learned that he was a prominent florist in Camden.

Some markers leave unanswered questions, such as the grave for Robert Frances Lester, who was just 16 when he died in 1918. Could he have been among the 675,000 people who died that year from the influenza pandemic?

"So many stories. Their stories deserve to be told," said Linda Shockley, president of the Lawnside Historical Society. "The cemetery is nationally important. It needs to be preserved and taken care of so that future generations can research it."

"It really is a treasure trove," said Jordon.

Mount Peace Cemetery is one of three places in the historically African American Camden County community that are listed on the National Register of Historic Places. More than 3,000 people are interred there. Among them are 77 Civil War veterans, including Medal of Honor recipient John H. Lawson.

During the Civil War, the veterans served in regiments on the East Coast, cemetery officials say. Their families sent their remains to Lawnside for burial because they were not permitted in white cemeteries. Lawnside, a stop on the Underground Railroad, was a haven for free Blacks and runaway enslaved people.

It is believed that as many as 125 Civil War veterans are buried at Mount Peace, but their graves have not been located. Burial records and plot maps were lost when a fire destroyed a caretaker's house on the property. Veterans of the Spanish American War, World Wars I and II, and the Korean War also are buried in Mount Peace.

The former cemetery owners went bankrupt years ago, leaving the association without funds to maintain the site. So the trustees rely upon donations and cleanups by residents and members of local churches and civic groups. The cemetery association recently began offering memberships and launched an online store that sells "remembrance merchandise" such as T-shirts and tote bags to generate revenue, Marshall said.

Preservation New Jersey has classified the cemetery as an endangered site since 2012 to bring public awareness that the cemetery could be in jeopardy. Marshall said the association hopes to get it listed on the National Underground Railroad Network.

Volunteers maintain the front section of the 11-acre cemetery, tending to graves and removing weeds. A local businessman serves on the cemetery board and has been picking up the cost of lawn service since 2014. New burials are no longer accepted.

Marshall said the association hopes to raise funds to clear the remaining acres and identify as many remains as possible and put fallen tombstones upright. There could be more graves in the back section, she said. They hope to locate an infant's section and the remains of Anna Maria Brin, an African princess from Sierra Leone who died in Camden in 1905, she said.

As they cleared the land, volunteers looked for clues to identify hidden graves, Marshall said. Some graves without tombstones are surrounded by clusters of spiky yucca leaves, often used by African Americans to mark a burial spot. Some family sections are surrounded by small stone markers in various shapes, but in many cases the family's name is unknown.

"There are many that are unknown," said Marshall, 44, a boutique manager.

Marshall has been keeping a log of every grave discovered. The association hopes to attract more tourists to learn about the cemetery's history.

"It's so inspiring. I just want to preserve that legacy," she said.