Michael Fitzmaurice, Medal of Honor recipient, is a reluctant hero 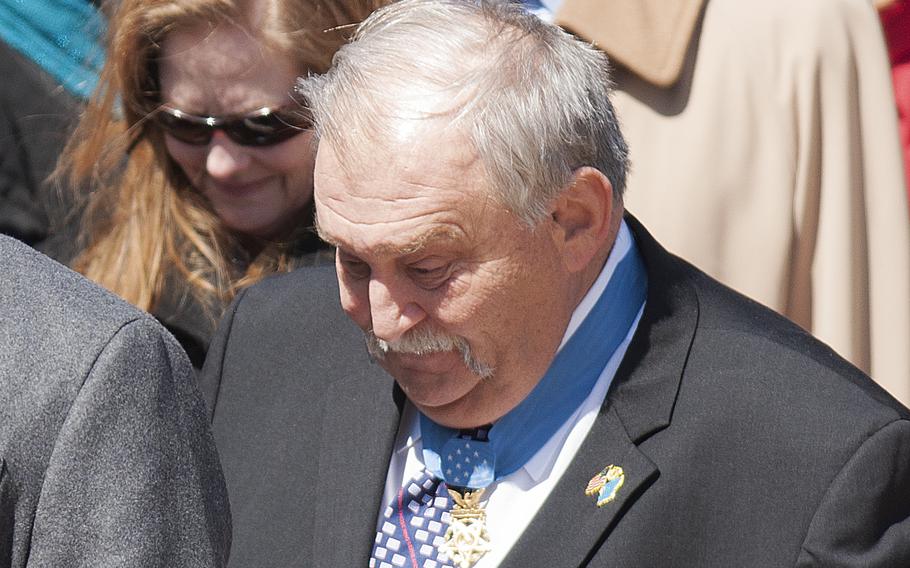 (Tribune News Service) — By all accounts, Michael Fitzmaurice is a military hero, but he doesn’t think so.

“I was just lucky and did my job,” Fitzmaurice told the Journal on Tuesday.

That response is a humbling characteristic of South Dakota’s lone surviving Congressional Medal of Honor winner and the person whose name graces the Michael J. Fitzmaurice State Veterans Home in Hot Springs.

Fitzmaurice was born March 9, 1950 in Jamestown, North Dakota. His arrival was an unexpected surprise for his parents.

“I was a preemie. My parents were just passing through and there I was,” Fitzmaurice said. “They left me up there and came back home [to South Dakota] for a month and then came back and retrieved me.”

Fitzmaurice grew up in the small East River town of Cavour and graduated in 1969 from Iroquois High School, near the border of Beadle and Kingsbury counties. His family had served in the military, so the decision to continue that tradition of service to country was an easy one to make.

“Me and three buddies came down to Sioux Falls and we all signed up. I went to the Army and there were two Marines and one Navy. So, we all went different, but the important thing, I guess, is that we chose to do it,” Fitzmaurice said.

By March 1970, Fitzmaurice was in the war zone. He was the only one of his group of friends to go to Vietnam.

Fitzmaurice was assigned to the Second Squadron, 17th Cavalry, 101st Airborne Division — a helicopter-borne unit. They would be deployed to places where combat was already going on if another outfit needed help.

After two months in Vietnam, Fitzmaurice’s unit was called into action to Khe Sanh, an active battle front that had seen numerous conflicts with the Viet Cong since early 1968. History shows that Khe Sanh was a hellish place after North Vietnamese troops attacked and surrounded the U.S. base there, bringing on a 77-day siege.

Back in 1968, the U.S. Marines stationed there barely survived and America abandoned the base. However, a decision to go into Laos was made three years later, meaning that its long-abandoned airstrip was again needed for raids against the Ho Chi Minh trail.

Fitzmaurice’s unit was assigned to guard the airstrip.

“We were attacked. They came and blew us up,” Fitzmaurice bluntly said.

As he recalls, the battle with the North Vietnamese began two or three days earlier with rocket and mortar attacks. On the evening of March 23, Fitzmaurice was on guard duty.

“I went out on the line and when it was over, I was going to go back to bed. Well, we no more got into our bunker than they started putting in the rockets and stuff again,” he said. “I had two really good buddies, Phil and Bill, so, Phil and I went out to get into the fighting position and there was one of our guys who had been all blown to crap laying there on the ground. Phil and I got into our hole. From there, they just started hammering us.”

“I wouldn’t even be here if Phil hadn’t shot a bunch as we came out,” he said. “We come running and they blew the main bunker. The other guys got buried, but Phil and I got into the fighting position and headed to another bunker.”

While at the new bunker, he and Phil joined at least one other soldier as the firefight against the Viet Cong continued to escalate. The enemy troops launched three hand grenades towards the Americans.

Fitzmaurice able to throw two of the grenades back, but one remained. It was a literal ticking time bomb.

Fitzmaurice quickly covered the grenade with his flack jacket to protect his friends from the imminent blast.

“There was no place to go, so it was just lucky,” he said.

Fitzmaurice said he was “banged up pretty good” when the grenade exploded. That’s certainly an understatement. He was seriously wounded and partially blinded by the blast.

But he continued to fight, refusing medical treatment. He wanted to continue the fight. In fact, when his rifle was damaged, he grabbed another rifle from an enemy soldier.

When the fighting finally subsided at daybreak, Fitzmaurice finally consented to medical treatment. Because of the severity of his injuries, he received as much treatment as possible in the fields of Vietnam before coming back to the United States.

After 13 months of surgeries and hospitalization at Fitzsimons Army Medical Center in Aurora, Colorado, Fitzmaurice was honorably discharged in April 1972.

He decided to come home to South Dakota, where he got a job cutting pigs at a processing plant near Huron. By that time, he had married his wife, Patty, on March 7, 1973 and the couple began raising a family, when he received a surprise phone call.

“I’m out there sawing a pig and I get a call and they said it was The White House,” Fitzmaurice said. “They told me I was going to be receiving the Medal of Honor. I didn’t even know I was put in for that. I couldn’t tell anyone until they put out a press release. It had to come out in the newspaper before I could even say anything about it.”

Fitzmaurice said the announcement took him by surprise, but he would be on his way with his family to Washington, D.C. to be honored by President Richard Nixon in October 1973.

He said his family was treated like movie stars, with a huge hotel suite, fine dining and even a few beverages for his brother.

“It was magical and fun, I have to say, but at the same time, I didn’t understand what was so special about what had happened in Vietnam,” Fitzmaurice said. “I was just doing what I was trained to do, and I was just lucky.”

Nixon presented the Medal of Honor to Fitzmaurice at a White House ceremony on October 15, 1973. But that moment of stardom didn’t impact the person that Fitzmaurice is.

He came home to South Dakota and went back to work processing pigs. Fitzmaurice said he got a job with the Veterans Administration in Reno, Nevada as a benefits counselor.

“But I hated it,” Fitzmaurice said bluntly.

Once again, Fitzmaurice came back home to South Dakota to processing pigs. Even though he hated the VA job in Nevada, he made a good contact.

Fitzmaurice said one of the big “head honchos” from Nevada came to Sioux Falls and he wanted to know if Fitzmaurice wanted to get back into the VA. He said yes.

Fitzmaurice worked for the maintenance department at the VA facility in Sioux Falls for the next 23 years, while still serving with the South Dakota Army National Guard and Air National Guard.

In 1998, Gov. Bill Janklow named the South Dakota State Veterans Home in Hot Springs after Fitzmaurice in appreciation for his service.