(Tribune News Service) It only took eight decades or so. But World War II veteran Johnnie Jones finally received a Purple Heart for his service.

Jones received the award at a ceremony Saturday in Baton Rouge, La.

According to an announcement from U.S. Sen. Bill Cassidy, Jones, now 101 years old, served as a Warrant Officer (Junior Grade) in the 494th Port Battalion, 6th Engineer Special Brigade. He took part in the third wave of Operation Overlord when he was injured on Omaha Beach. Jones sustained a back injury from his ship hitting a mine, and also suffered penetrating shrapnel wounds from German air attacks.

After receiving the Purple Heart, Jones, a Baton Rouge resident, said “They’re always showing me a lot of honors now, which I never thought I would ever receive,” according to a WBRC report.

After learning Jones had gone years without proper recognition, Cassidy pushed for Jones to be honored, according to WBRC’s Donald Fountain. “Here’s a man who could be bitter, but he speaks only of affection and he speaks not of himself, but his love of our state and of our nation and his desire that everyone have the same opportunity to enjoy the blessings of the state in nation,” Cassidy said.

After his service during Operation Overlord, Jones participated in the Northern France campaign. In addition to the Purple Heart, Mr. Jones is a recipient of the European-African-Middle Eastern Campaign Medal with two bronze stars and one bronze arrowhead, the American Campaign Medal and the World War II Victory Medal. He has also received the Legion of Honour and the Croix de Guerre with Palm from France.

After his service, Jones became a lawyer and went on to represent the organizers of the Baton Rouge Bus Boycott, which served as a template for the Montgomery Bus Boycott. He also served a term in the Louisiana House of Representatives.

“Johnnie Jones fought to liberate the people of France, led civil rights efforts at home and selflessly represented his community,” Cassidy said. “It’s an honor to present such a well-deserved honor to this great man.” 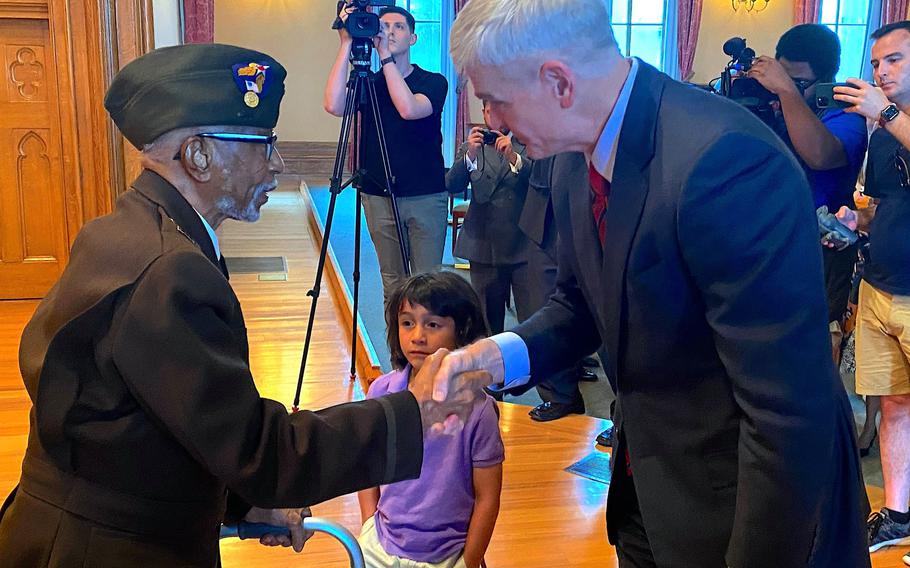