(Tribune News Service) When the climb got roughest during the 320-mile trek across Pennsylvania, Tucker McCullough mustered the energy to press forward by invoking the past.

Accompanied by five comrades on the PA Hero Walk from Philadelphia to the Alle-Kiski Valley, the Army veteran recalled the many brave soldiers who traversed the same land by foot hundreds of years ago in a quest to forge a fledgling America. Most of the 14-day trip for a veterans charity that ended Saturday was spent walking alongside Route 30, or the historic Forbes Road, the military thoroughfare built during the French and Indian War and named for Brig. Gen. John Forbes.

This year’s participants averaged 22 miles a day, including steep hikes over the Tuscarora and Blue mountains.

“It’s a tough trail up that mountain,” McCullough said. “But then you think to yourself that there were men who had to cut the tree down in front of them to get to the next step.

“What we’re doing is really just walking in their footsteps — and it’s a helluva lot easier on us than it was on them,” McCullough said. “And that’s what gets you over the crest of that hill. Not to mention when you go back down, there’s 45 people waiting there and a parade clapping for you.”

Small parades of supporters and fellow fundraisers popped up at several stops during the six-man team’s journey, including marchers in Lower Burrell as well as Ligonier, Derry, York and Parkesburg. They participated in brief ceremonies and gatherings at veterans clubs as well as memorial sites and town squares.

Now in its 13th year, the PA Hero Walk is an annual event put on by the Kiski Valley Veterans and Patriots Association that has raised nearly $3 million since its inception in 2009, PA Hero Walk President Dave Rapacchietta said.

The 2021 walk and related fundraising efforts are on track to raise nearly $300,000, with more donations being tabulated over the weekend.

The money goes to support honorably discharged veterans from any era who live in Pennsylvania and are enrolled in VA benefits. Help spans everything from covering dental, utility and mortgage bills to helping family members of veterans pay for funerals or install a handicapped ramp.

This year’s walkers enjoyed donated meals and stays provided by 41 Veterans of Foreign Wars, American Legion, Elks and Moose lodges and other supporters scattered across the state, including a welcome-back dinner Friday night at the American Legion post in Vandergrift.

In military fashion, they kept a tight schedule and stuck to it. They took turns hoisting an American flag while walking and donned neon-yellow matching shirts. An RV emblazoned with the names of their supporters followed along, equipped with coolers filled with Gatorade and water.

The shortest and final day, Saturday, stretched nine miles — from the Veterans War Memorial in Leechburg to the VFW Post 92 in Lower Burrell, where the journey culminated in a celebratory picnic with the walkers’ family and friends. On their longest day, they logged 28.4 miles.

“We’re always trying to get more walkers,” McCullough, a father of six, said while packing up the PA Hero Walk RV van with his wife, April, happy to be home with his kids and two dogs but already gearing up to plan the 2022 walk. “I can’t wait until next year.”

For McCullough, who completed his fifth full walk, the cross-state journey is always therapeutic and rejuvenating. He enjoys vacillating between chats with fellow walkers — including his son, 17-year-old Gregory McCullough — as well as zoning out on his earphones to his eclectic music library, from the latest country hits and Johnny Cash to the Monkees and Rob Zombie. He marvels at the beauty of the little things that get missed when whizzing by in a car.

“You would not believe how beautiful our state is until you walk across Route 30 at a snail’s pace and look at everything. In all honesty, there’s no real words for it,” McCullough said. “... When you crest Blue Knob, you can see the next mountain and everything in between and everything you just passed. And then, when you get up into the Laurel Highlands, you feel like you can see the whole state from up there.”

This year’s walk went well in terms of weather, with only one morning bringing a bout of rain and a cold-weather day that required wearing extra coats.

It hasn’t always gone so smoothly.

Nobody was injured during this year’s walk, whereas in prior years participants have sprained an ankle and broken a foot.

In 2018, the group got caught up in a flash flood that poured down so hard and fast that they found themselves in water up to their waists.

The biggest event that affected the group during their walk actually happened back home in Western Pennsylvania.

James Vincent “Jim” Scahill III — one of the PA Hero Walk’s founding members and a longtime Armstrong County commissioner — died at his Kittanning home on Saturday, June 19, about a week into the trip. He was 74.

This year marked the first statewide walk missed by Scahill, whose health had been declining in recent months.

The walking team had just sat down to eat a meal in Chambersbrug when Scahill’s son called McCullough to tell him his father had died. He waited until he got back to the hotel to break the news to the rest of the group.

Scahill was known statewide as a force in the veterans charity field and active volunteerism, from dressing up like General Forbes to give historical talks to tending to injuries during the annual walk.

“He was just that booming voice, very personable. He took care of the men, he fed us, bandaged us, everything like that,” McCullough said. “Not only was he a founding member of this thing, but he was a very integral part of it. He did a lot. You’ve never met a man more knowledgeable about military history, about the state of Pennsylvania and especially the county of Armstrong. Just all walks of life loved that man.”

Scahill’s death prompted the walkers to halt the trip for one day to drive back to Armstrong County for their friend and fellow veteran’s funeral at Grace Presbyterian Church on Thursday, followed by a military burial at Kittanning Cemetery.

Though devastated by his loss, the team took consolation by reminiscing about Scahill’s impact and felt his spirit with them as they finished their journey.

“The joy that we brought his family by us rolling back in when they didn’t think we would, that carried us the rest of the way,” McCullough said. 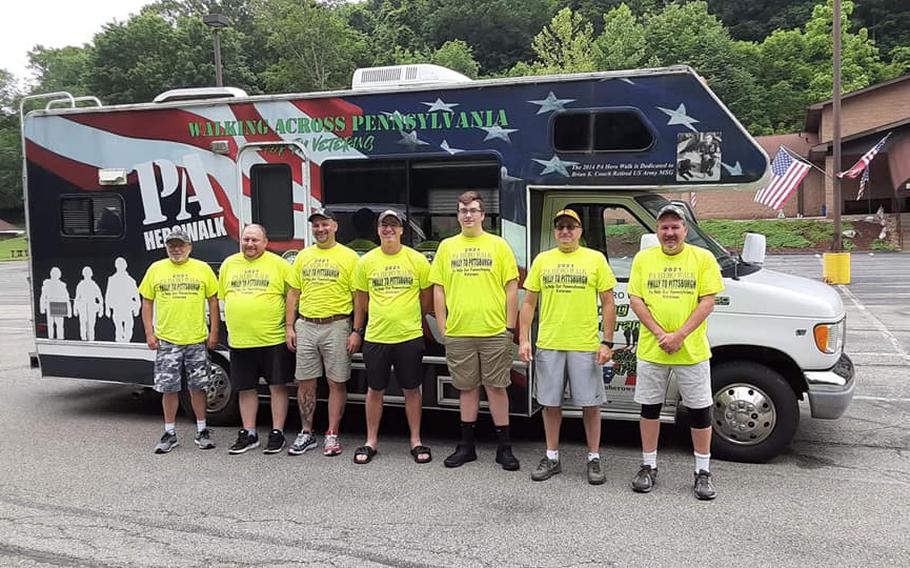