‘Kindness all over the place’: Veterans serve in a new way at South Carolina food pantry 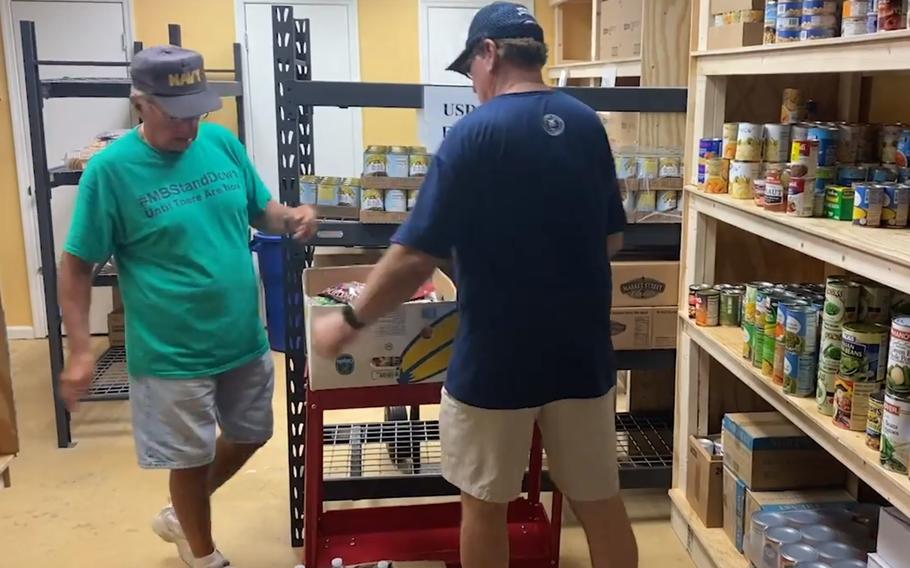 Veterans work at the  Socastee Pantry in Socastee, S.C. The pantry is run entirely by veterans and their spouses. (Screenshot from The Sun News video)

SOCASTEE, S.C. (Tribune News Service) — To the people at the Socastee Pantry, it wouldn’t be an overstatement to say the place has saved lives.

"I've been out of work, so these places saved me," said Socastee resident Kent Hodges who picked up food this week.

The people volunteering at the pantry can relate.

"I don't know if 2022 was guaranteed for me, I could have joined the 22," said Gerry Shea, referring to the average of 22 military veterans per day who take their own lives. "I have three beautiful daughters and a beautiful wife, a beautiful family. But without purpose at a young age and nothing to wake up to, (it) was extremely hard for me."

Shea, who served in Iraq and Kuwait before being injured, faced obstacles after coming back to the U.S. and attempted to harm himself several times. Things shifted for him after the first meeting of Socastee Pantry volunteers.

Now, he's one of numerous volunteers at the pantry, which is run entirely by veterans and their spouses. He's got his eyes on the future, hoping to connect with other food pantries in the area and improve the way organizations like this work.

The Socastee area hasn't had a permanent food pantry in the last year, and bringing a stable source of food to the area is vital, according to director Larry Simmons, who was in the Army himself.

For Socastee residents like Hodges, who was diagnosed with melanoma a few years ago, bringing food closer has helped immensely. Instead of driving to Garden City from his Socastee home, Hodges can now save money on gas by going up the road to the Socastee Pantry, located in The Father's House church, 4513 Highway 17 Bypass South.

Hodges has gone through four surgeries and three rounds of chemotherapy since he was diagnosed with melanoma, and he hasn't been able to work as a result. For Hodges and other Socastee residents, food access became an obstacle. Two separate tracts in and around Socastee are made up of primarily low-income families who also have low access to food, according to the U.S. Department of Agriculture.

Veterans find community through serving at the pantry

For some volunteers, the bond with the people they serve is immediate. They've even connected with fellow veterans who come in looking for food. Most volunteers told stories of a relationship they've formed with an Army veteran who's been at the pantry each week since it opened.

"She comes in on Monday every week," said Bob McCurry, a Navy veteran who served in Vietnam. "She says, 'I'm so glad you guys are here, because I know I can eat each week. I get food each week.'"

While providing food to families who need it is the primary goal of the pantry, Simmons has found it gives veterans a much-needed chance to connect with one another, share stories and find support in the veteran community. It can be "like talking to a family member that you've lost," according to Roy Edges, a volunteer who spent eight years in the U.S. Air Force.

The pantry is a part of Faith Outreach Ministries, which facilitates food distribution events each month in Horry County. The starting costs were "next to nothing," thanks to generous donations from local businesses, Simmons said. Lumber for shelves, the initial food stock, a sign and more were donated to the pantry free of charge.

'It's been very healing'

The volunteers, especially those who couldn't finish their deployments, have found closure through helping others and bonding with fellow vets.

"I just wanted to take back what had been stolen," said Dusty Bolyard, a Navy veteran who left the service disabled. "It's been very healing, it gives me something to do."

The pantry is opening in the later stages of the coronavirus pandemic, during which food insecurity was thrust into the spotlight as millions across the country struggled financially. The need for food in Horry County has been evident through the last year and a half, but the veteran volunteers maintain it's not only a pandemic-era problem. They plan to stick around long after COVID-19 is in their rear-view mirror.

The pantry is believed to be the first veteran-run food distribution center in South Carolina, and it functions more like a typical grocery shopping experience than some food banks. Guests can choose what food they want and like, and the volunteers are sure to ask about allergies or dietary restrictions.

Through a database system developed by Shea, the inventory is updated in real time and the volunteers are on the same page about which food items they have and how much is available. Eventually, the goal is to connect with other food banks in the area to minimize food waste by communicating with each other through a similar system. Simmons also has hopes to open another food pantry in Socastee where the volunteers speak Spanish to increase food access across the area.

"Kindness is just coming out all over the place," Simmons said about the pantry's first few weeks.