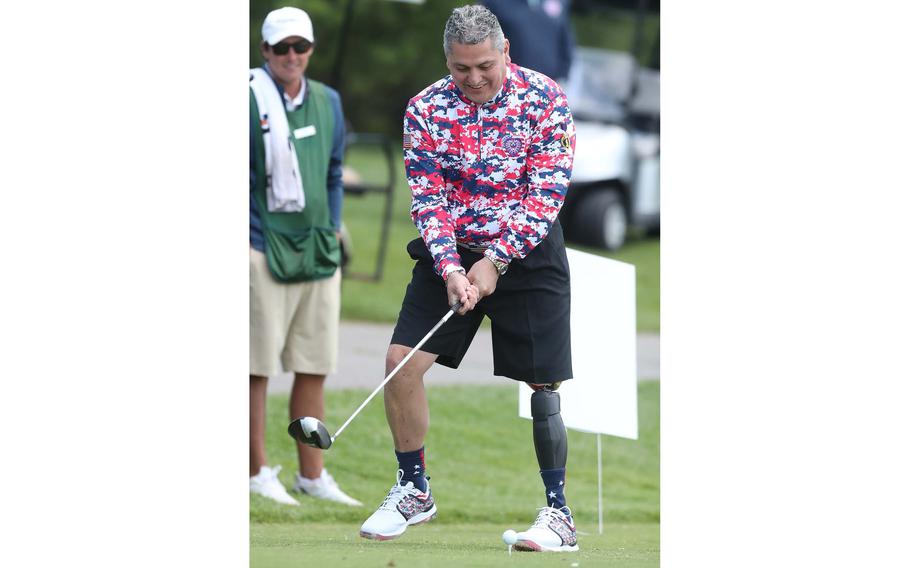 Major Ed Pulido, the founder and CEO of the John Daly-Major Ed Heart of a Lion Foundation, tees off on 17 on the North Course at Firestone Country Club on Tuesday, June 22, 2021, in Akron, Ohio. (Karen Schiely, Akron Beacon Journal/TNS)

(Tribune News Service) — John Daly has tried to help those in need throughout his PGA Tour career.

But a gregarious retired U.S. Army major with a Purple Heart and a prosthetic leg helped Daly when he reached a turning point with his 2020 bladder cancer diagnosis. Their partnership has given Daly’s charity work a newfound focus.

Major Ed Pulido teamed with PGA Tour Champions star Daly to launch the John Daly-Major Ed Heart of a Lion Foundation last October. Pulido said their fundraising events brought in $260,000 in the first three months and they’re on track to total $1 million in the inaugural year.

On Tuesday, Pulido stood at the 17th tee at Firestone Country Club’s North Course, greeting participants and posing for pictures during a pro-am put on by the Wentz Family Foundation to benefit Heart of a Lion.

First discussed by Bud Wentz, president of Wentz Financial Group in Hudson, and Daly during a pro-am two years ago, Daly’s event was capped by a Jake Owen concert hours later at the Archbishop Hoban High School football field. Most of the proceeds will benefit Daly’s and Pulido’s 501c3 charity that serves children, veterans and first responders.

“We do events all across the country. What we try to do that’s different, we try to keep at least 60 to 70% of the dollars local,” Pulido said. 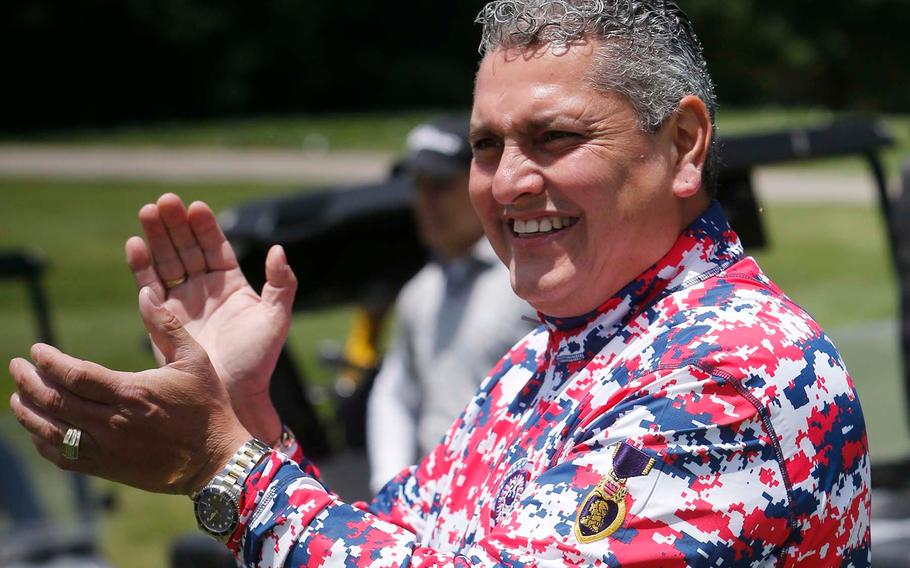 Major Ed Pulido, the founder and CEO of the John Daly-Major Ed Heart of a Lion Foundation, applauds golfers as they tee off on 17 on the North Course at Firestone Country Club Tuesday, June 22, 2021 in Akron, Ohio. (Karen Schiely, Akron Beacon Jour)

Pulido, 53, of Edmund, Oklahoma, said he met Daly, 55, about 15 years ago at Whistling Straits Golf Course in Kohler, Wisconsin, and they did some charity work together.

But it wasn’t until last year when Daly began planning the new foundation that they reconnected and became partners.

“A turning point, he had a cancer diagnosis and for him it was like, ‘What’s next? How long can I continue doing what I’m doing?’ and making some changes to not only his philanthropy footprint, but his life,” Pulido said. “I think all of us have a point in life when that comes to be.”

Pulido's came when he was 37 in 2005, when he was forced to retire from the military after 20 years of service and three tours of duty.

On Aug. 17, 2004, the vehicle he was driving in Baqubah, Iraq hit a 250-pound roadside bomb. Pulido said he had been trained to swerve right or left in such an instance. He swerved right, saving the lives of those with him.

“The first fragment broke my knee in three places, the fragment is still in the left side of my body,” Pulido said. “A combat medic pulls me out. I spent about 17 hours in surgery after I got back to Bagdad. Then Germany, Walter Reed, and Brooke Army Medical Center [in San Antonio, Texas]. I spent almost 40 days in ICU with e-coli, two staph infections and some kind of chemical infection in my leg. On Oct. 1, there was no other remedy except to amputate.”

With retirement inevitable, Pulido remembered the words of his father Manuel, a chief warrant officer 4 in the Army with whom he served when he enlisted at age 17.

“I’m thinking, ‘What’s next?’ I could have sat down and said, ‘I’m going to take my retirement and hang out at the house,”’ Pulido said. “But it was my father, he said, ‘Be resilient. Never quit. Move forward.’ That’s what John represents.”

Pulido went to work for the United Way, then spent 13 years with Folds of Honor, which aids families of fallen or disabled servicemen and women. Pulido gained valuable experience he’s now using to help Daly.

Manuel Pulido, who lives in Lakeland, Florida, was diagnosed with terminal cancer in June, 2020, which Pulido said coincided with Daly’s test results. Daly revealed in September that he’d undergone surgery, but the bladder cancer had an 85% likelihood of returning. That strengthened Ed Pulido’s bond with Daly.

The Heart of a Lion Foundation soon followed. The lion in the logo represents Daly, the Purple Heart Pulido’s service and the American flag in a heart shape says to Pulido, “America’s heart is with all of us and we should do our part to make a difference.”

The foundation has worked on a house project for a veteran in Oklahoma. Some battling suicidal thoughts have had help in seeking counseling. Injured first responders have received assistance. The foundation also aids St. Jude Children’s Research Hospital and the Boys & Girls Clubs.

“A lot of is morale, welfare and recreation, taking care of their families and connections to organizations that can provide support and healing and educational opportunities.”

Pulido said Tuesday’s pro-am and concert would not have happened without Wentz, Heart of a Lion’s first corporate sponsor.

“We talk about unity and we talk about all of these words, but what’s our action?” Pulido said. “Our action is we’re not going to leave anyone behind on the field of battle for our military, but also on the homefront. That’s what’s Bud’s all about. For us to do our part with him and raise a substantial amount of money, tonight (Tuesday night) the concert with Jake Owen is going to be a pretty powerful thing.”

Pulido agreed that his partnership with Daly centered Daly’s charitable efforts that had been well-intentioned but somewhat scattershot before.

“We gave it focus, we gave it horsepower, we gave it connection,” Pulido said. “We reconnected with our network of people that have helped us with other things. Now it’s inventoried and we know what we’re doing.

“We’ve got people coming at us with golf course management, square (toed) shoes. We’ve got a coin coming out soon with John’s logo and name on it. I’m just re-starting this new brand. We’re the heart of a lion, the heart of America, the heartbeat of our nation. That’s the focus that we want to give. We want to change lives.”