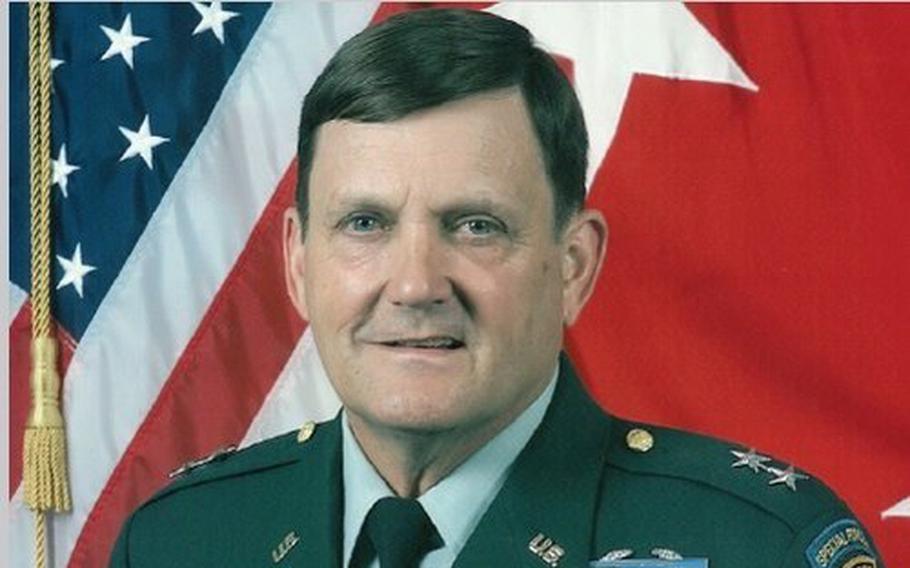 HOQUIAM, Wash. (Tribune News Service) — A local group is collecting donations and working with the city of Hoquiam to establish a park to honor Maj. Gen. Eldon Bargewell, a 1965 Hoquiam High School graduate whose long Army career earned him many commendations and the respect and admiration of his military peers.

Dubbed Delta Park by the group, the Eldon Bargewell Foundation, it would be located just a few blocks from where Bargewell grew up on N Street in Hoquiam — a delta-shaped chunk of property framed by State Route 109/Emerson Avenue, N Street and Maple Street, about a block and a half east of Emerson Elementary School.

Bargewell entered the Army two years after his graduation from Hoquiam High School. When he retired in 2006, he was a two-star general. His many commendations earned over his career include the nation's second-highest combat award, the Distinguished Service Cross, for bravery shown while repelling a force of 75-100 enemy soldiers while with a small, long range reconnaissance team deep inside enemy territory in Vietnam in September 1971.

"My wife and I came back to the Harbor and bought a house across the alley from (Bargewell's) mom and dad, so when Eldon would come home, I was usually doing some kind of project in the garage, and he'd come over and visit," said Fry. "We'd spend a lot of time talking about retiring and things in general. I always looked forward to his visits."

The retirement talk centered around Bargewell's rank at the time.

"He was a full-bird colonel at the time, and it was promote or perish, and he got promoted," said Fry. "When his mom passed away he came back out for the funeral and had dinner with Karen and me. That was the last time I saw him. I never got to harass him about that second star, which I was kind of bummed about."

Fry, like many who knew Bargewell, was unaware of Bargewell's reputation in the military, only becoming familiar with it after Bargewell's death in April 2019.

"He was a pretty close to the vest kind of guy, he didn't talk much about himself," recalled Fry. "He was real humble. You would never have known what an influence he had in the world."

The centerpiece of the park will be a bronze statue of Bargewell. Rip Caswell, a Montesano High School graduate, and his wife Alison will create the piece.

"Rip went to work for Schafer Brothers after graduation as a welder and said he got pretty good at it," said Fry.

Now, the Caswells have a studio in Troutdale, Oregon, and have produced pieces for National Geographic, the Oregon Ducks and many others. You can see their work at caswellsculptures.com.

There will be three plaques in the park.

"One of them will be called True Leader, and it will outline Eldon's leadership role in his career from Vietnam to Iraq," said Fry. "The second will be True Warrior and list all of the operations that Eldon was a part of. The third plaque will be called True Hero and will list the medals that he earned for valor and an abbreviated version of the citation from the Distinguished Service Cross."

Concrete pedestals will be created by Dan Christensen of Redding, California.

"He served with Eldon at one time and he's doing them for cost, which is about a third of what it would have cost to have them done," said Fry. "He has a company there that does really ornate concrete work and he reached out to us" when he heard about the planned park.

The Hoquiam Historical Preservation Committee will consider last week's presentation. After a 30-day period for public comment, the proposal will be brought before the City Council for consideration.

For the city's part, the group is asking for sidewalks, signage, parking modifications, and the installation of crosswalks across N and Maple and an inlaid flashing crosswalk on Emerson, among other considerations.

The group is raising funds toward its goal of $300,000 for the park, and is about halfway to its goal. Recently Fry posted on Facebook that the little more than $150,000 raised so far has come from more than $84,397 from the Hoquiam High School classes of 1963-1967, and the rest from a long list of veterans and other supporters.

Fry acknowledged the help of the military, with different retired personnel helping the group contact special ops and field grade officers and spreading that word about the project.

You can learn more about Bargewell's military career and the proposed park at eldonbargewell.org. There is a link to the park project and a place to make donations to the project.