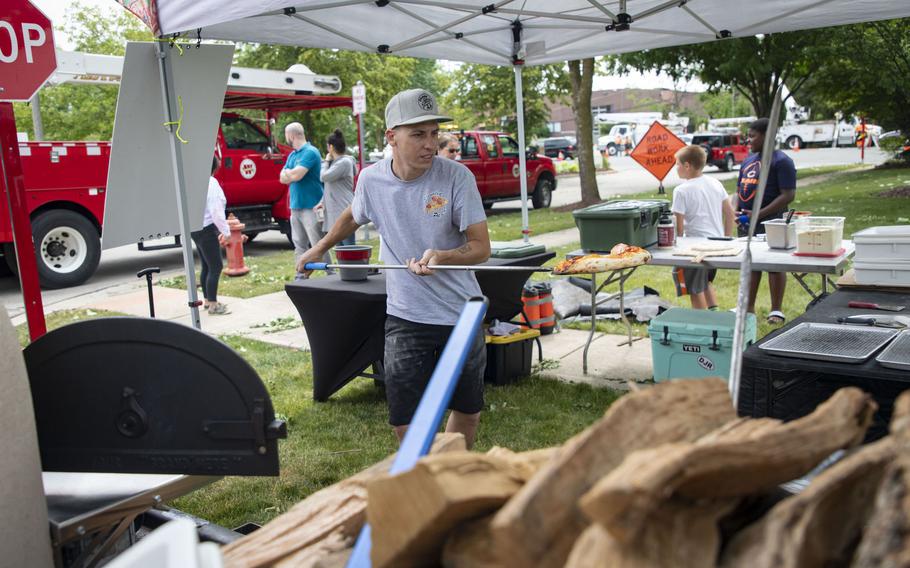 CHICAGO (Tribune News Service) — Brian Rock has a vision: He wants to make pizzas for people at natural disaster sites.

So when Rock, 29, of Merrillville, Ind., heard about the tornado that tore through the Naperville, Ill., area Sunday night, he packed up his dough, sauce and cheese and headed toward the wreckage.

Stopping at Woodridge, Ill. — the first hard-hit community he came upon — he sprang into action, delivering his own brand of comfort: hand-tossed, gourmet pizzas cooked in his wood-fired oven. Over the next five hours, he made 72 12-inch pizzas and distributed them, free of charge, to anyone who asked.

“It sure was fun,” a tired but undefeated Rock said in a phone interview Monday night.

Rock, a U.S. Army veteran and co-owner of Elevated Pie Co., a year-old pizza startup, said that people in Woodridge complimented his pizza skills and donated hundreds of dollars to his disaster relief cause. On his company’s Facebook page, one of his new fans wrote that she and her father were working on a damaged property until 9 p.m., and the pizza “kept us going.”

Rock, who served in Afghanistan in 2013, said the benefits flow both ways.

Even when it’s physically demanding, he said he finds making free pizzas a stress reliever.

Ultimately, Rock would like to raise enough money for a 24-foot enclosed trailer with a full kitchen, a sink, and two refrigerators.

“My goal is to head down to the hurricanes and the tornadoes to just travel with the storms,” he said.

Rock said his PTSD, acquired in Afghanistan, has improved over the past five years. He hasn’t had a nightmare in years, and he’s excited about his pizza company, which he co-owns with his fiancee.

“I’m much happier now and I’m trying to stay stress-free,” he said. “I’ve got a dog, and that helps out a lot. It’s been a work in progress.”

Yesterday’s visit was his second solo trip to a natural disaster site. He provided pizzas in Cedar Rapids, Iowa, last summer after tornado damage. He works farmers markets to raise money for his pizza giveaways.

Rock said he learned about Sunday’s tornado via a news report he saw at the gym Monday morning. He called police, firefighters and the Red Cross to try to figure out where to go, but they didn’t have any guidance, so he turned to the Snapchat app, where people were uploading videos.

He drove in the direction of the worst damage and stopped where he saw work crews.

He arrived in Woodridge at 1:30 p.m., and started making pizzas at 2 p.m., working until 6:30 p.m. and averaging 18 pizzas an hour, he said. Rock works solo, tossing crusts for some pizzas while he cooks others.

Reached by phone a few hours after his pizza-making effort, he said it was great to hear praise from Woodridge residents and questions along the lines of, “Who does this?”