ANCHORAGE, Alaska (Tribune News Service) — Check out the USA Patriots outfield and you’ll see what makes this softball team different from any other.

Four guys patrol the outfield, and between them they have four legs, seven arms and one wicked sense of humor.

Scotty Fura Jr., is the right-center fielder, and he’s missing his right arm. Sometimes when a ball comes his way, “We yell, ‘Two hands!’ “ said left fielder Cody Rice, who stepped on a mine in Afghanistan and is a below-the-knee amputee.

Josh Wege, the left-center fielder, is missing both legs, so of course his nickname is Josh “No Leggy” Wege.

“You crack a joke and you become human again,” said Wege, a retired Marine whose vehicle was hit by an IED in 2009 in Afghanistan.

The USA Patriots Amputee Softball Team is a collection of retired military veterans who lost limbs while on active duty. They’re in Alaska for a week to play in an Anchorage Sports Association softball tournament, work with Special Olympics athletes, visit hospitalized veterans and do a little sightseeing.

The team’s slogan is “Serving beyond the uniform,” and there is no question the Patriots live up to it. They love the game, which they play with the same intensity and vigor as any of the teams with non-disabled players competing this weekend in Anchorage, and they love using it to forge connections with others who are physically or mentally disabled.

Rice, a 35-year-old retired Army staff sergeant who lives in Grass Valley, Calif., stands 6-foot-3 and weighs 240 pounds. He was the biggest kid Friday morning on the ball field, where the Patriots played softball with Special Olympics athletes.

He was a constant source of laughter and chatter as he stood behind the plate while the Special Olympics athletes batted. He declared every swing a sweet one, applauded every effort no matter how far the ball traveled, gave a few tips without overdoing it and formed a quick bond with just about everyone who picked up a bat.

When Rice took the mound to pitch, he faced Special Olympics athlete Brian Knight. The two had already done some bantering when Rice was behind the plate, and now Knight was eager to get the best of his new friend.

Rice lobbed a purposely-fat pitch, Knight hit it through the infield and made it to second base, where he beamed as he playfully ribbed Rice. “I was watching the curve ball, man,” he said. “Not today. Not today.”

Afterward, standing in the sunshine, Rice said making the game accessible to challenged athletes is one of the joys of being a Patriot.

“It’s an environment we thrive in,” he said.

Around 9:30 on Saturday morning, Benjamin Bohart of Seward, Alaska, saw a text telling him an amputee softball team was playing in Anchorage.

“We had plans, but we canceled everything,” he said.

He and Rhonda Bohart loaded up their two kids, 6-year-old Justus and 4-year-old Pax, and a couple of hours later they arrived at the fields, where Justus got the opportunity to see people who look like him.

Justus was born with a condition called fibular hemimelia and was 11 months old when his left foot was amputated.

“He’s been asking a lot just to see other amputees and meet other amputees,” said Rhonda, who is so eager to make that happen she has reserved a park from 1-4 p.m. next Saturday for what she’s calling an Amp Camp. Simple activities will be offered and it’s free, she said.

A couple of years ago, the family went to an athletic prostheses clinic, where Justus was the only child in attendance.

“It was the first time he met anyone else (who was an amputee),” Benjamin said. “He went up and hugged people’s prosthetic legs.”

After the Patriots’ first tournament game Saturday — a bruising 21-5 loss that had to do with the lack of hits, not the lack of limbs — players gathered under a canopy tent to snack and relax.

Omar Sanchez and Shannon Armstrong stood a short distance away with their son, 7-year-old Oziah, who was born with symbrachydactyly and is missing his right arm from the elbow down.

“He doesn’t see many people like him, so it’s huge for him” to watch the Patriots play, Armstrong said. “It inspires him to try sports.”

Oziah, whose favorite sport is soccer, stood by silently, sometimes circling behind one of his parents as if to hide. Then Saul Monroy, a below-the-knee amputee from El Paso, went over to him. Monroy has stickers that depict him as an action figure and he gave one to Oziah, whose shyness vanished around Monroy.

Before long, Oziah had peeled off the back of his sticker and placed it on the nub where his right arm ends.

Scott Fura Jr. was at the concession stand getting a burger while Oziah visited with the team, and he was bummed he missed meeting him. He’s missing an arm too.

Fura, 18, is the reason why the Patriots do what they do.

The USA Patriots — formerly the Wounded Warriors Amputee Softball Team — are a nonprofit organization whose main charity is its annual Kids Camp. They make 15 to 17 trips a year, said executive director Desiree Ellison, and each hosting organization makes a contribution to the team.

Fura is a veteran of the inaugural Kids Camp in 2013. He was 2 years old when he lost his right arm from the elbow down in a lawn-mowing accident, and he went on to become a multi-sport high school athlete in Camillus, N.Y.

“It was probably the best week of my life. Seeing kids who looked just like me was unreal,” he said. “It makes you a lot more confident.”

Fura catches nearly everything that comes to him, and when he does, he puts his glove under in the crook of what remains of his right arm, grabs the ball and throws it to the infield, all in one swift, fluid motion.

He bats left-handed, and he’s working on using his one-armed swing from the other side of the plate, like a tennis backhand. He’s learned a lot by trial and error, and a lot from his teammates, including how to apply humor to his situation.

“You have to be able to make light of the situation, because it’s nothing we can change,” he said.

Everyone has a birthday. The Patriots have alive days. It’s the day when they were blown to bits yet survived.

Josh “No Leggy” Wege’s alive day is Oct. 4, 2009. He was sitting on top of the gas tank of a light-armored vehicle while patrolling near the Afghanistan- Pakistan border when the vehicle’s back tire hit a 200-pound IED.

Wege was covered in gasoline and for a while didn’t see or hear anything. When those senses returned, he felt no pain, but when he patted down his legs to see if everything was OK, they were wet with blood.

“I’m 19 years old and I set my head back and accepted I was probably probably going to die,” he said.

But a Navy medic was nearby and quickly put a tourniquet on each leg.

Reese Hines’ alive day is April 9, 2011. He’s 40 now, a retired Army master sergeant living in San Antonio, Texas. He was an explosive ordnance disposal technician — he located and disarmed IEDs — and was injured attempting to disarm a device while lying on the ground in front of it. It blew up in his face.

He lost an eye and two fingers and suffered multiple and severe skull, facial and other injuries. His brother, Yuri, was in Italy at the time, an Air Force pilot who three weeks earlier lost a wingman while on a bombing mission in Libya.

Yuri heard about his brother’s accident and made a high-speed drive to Germany, knowing his brother would be taken to the Landstuhl military hospital there. Yuri was there when an unconscious Reese arrived, and Reese remembers hearing his brother’s voice, thinking at first he was hallucinating.

“When I woke up I was mostly blind and my ear drum had ruptured so I could barely hear,” Reese said. He’d already had two surgeries in Kandahar, with many more to come. After his accident, he moved to Eagle River, Alaska, where his mother was living, and lived there for five years before moving to Texas.

“It’s been a lot easier because we’re plugged into a big VA there,” Hines said, “and I was a little tired of winter.”

Like every team at this weekend’s Pot O Gold tournament, the Patriots had a four-game guarantee. They lost their first two games — they led the first 4-2 before their bats went cold in a 21-5 loss, then they fell 24-22 on a bad base-running decision when a runner who reached second safely was thrown out at third when he tried to go for an extra base.

They won their third game 24-2, lost a close 13-11 decision in their fourth game of the day and started Sunday with a 13-3 win. They were eliminated with a 16-9 loss to finish the tournament with a 2-4 record, with two of their losses coming by two runs.

The field was packed for the tournament, with four games happening at once, and the Patriots drew a crowd for every game.

Trelane McKinney, a 62-year-old disabled Coast Guard veteran, happened to go to the weekly steak dinner at American Legion Post 28 on Friday night, and the Patriots were there. She was blown away by the stories they told, and she showed up to watch their first game Saturday.

“It made me feel like I got nothing to complain about compared to what they’re doing,” said McKinney, who was wearing her “Gimps Got Game” T-shirt from the 2006 Wheelchair Games in Alaska.

“Even though they went through hell, they still have the stamina to laugh and joke.”

Among those watching the Patriots on Saturday afternoon was Alaska U.S. Sen. Dan Sullivan. Wege, one of three players who played on the original Patriots team formed 10 years ago, said it was the first time a U.S. senator has come to one of their games and spoken to them.

When Sullivan said he was a member of the Marine Corps Reserve, the response was a chorus of “semper fis,” “yuts” and “errs.”

He invited them to share any issues with him. “I’m on the right committees,” he said. “Armed Services, Veterans’ Affairs. Fire away.”

“You just need to clean the VA up, and we’re good,” a player said, drawing laughter and agreement.

After their final game the next day, the Patriots posed for a photo with players from other teams who are active duty or retired military. There were scores of them.

“It’s a very big military state,” said executive director Ellison, who said the team’s reception in Alaska has inspired thoughts of a return trip in 2023.

A redeployment, if you will, for men whose service beyond uniform means putting on softball uniforms and making people smile. 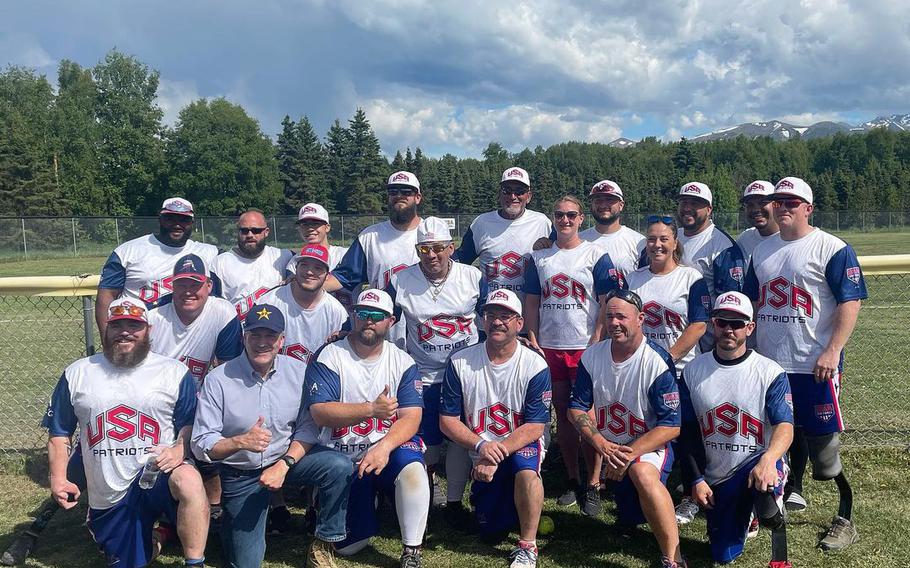