FORT WALTON BEACH (Tribune News Service) — Retired Army Lt. Col. Sam Lombardo, an Italian immigrant who came to America at the age of 10 and served in World War II, Korea and Vietnam, died Friday at the age of 101.

A colorful and deeply patriotic presence in Fort Walton Beach for years, participating regularly in events honoring veterans while dressed in his World War II uniform, Lombardo had been under hospice care in Pensacola in the days prior to his passing, according to longtime friend and local restaurateur Tom Rice.

“You couldn’t keep up with the 100 years of stories,” Rice said Saturday in remembering Lombardo. And like all good conversationalists, Rice added, Lombardo “seemed to be able to find some common ground with everybody.”

“He was so proud to wear his World War II uniform,” Rice said, going on to note that Lombardo was always willing to share his wartime experience with younger generations.

“He was one of these guys who thought we’d all live forever,” Rice continued. “He was pushing for 102.” Lombardo’s passing came just one month before he would have turned 102.

But Lombardo, an avid golfer and fan of the game, also was humorously philosophical about death, according to Rice. “He’d say, ‘Where I’m going, there are no greens fees,’ ” Rice said with a laugh.

Some of the fabric of Lombardo’s life will live on in the National Infantry Museum & Soldier Center at Fort Benning, Ga. On display there is an American flag crafted in the days after World War II’s Battle of the Bulge by Lombardo and his men as they advanced across the German countryside from late 1944 into early 1945.

In the days after the battle, a last-ditch effort by Adolf Hitler to split the Allied forces arrayed against him that produced heavy American casualties, Lombardo noticed that he hadn’t seen any American flags. Then serving as the executive officer of an infantry company, he asked his company commander for a flag. The request was sent up but denied by headquarters.

“The denial made me so furious that I thought to myself, ‘If they won’t give us one, we’ll make one,’ ” Lombardo recounts in his World War II memoir, “O’er the Land of the Free.”

Moving across Germany, Lombardo and his men noticed white cloth surrender flags hanging from many windows. One of those pieces of cloth happened to measure 3 feet by 5 feet, the perfect size for a flag. Inside the abandoned home in which that cloth hung, Lombardo and his men found pillows made of red fabric that would become stripes on their flag, and the blue curtains that would become the flag’s field under pieces of white cloth cut into the shape of stars with the company medic’s scissors.

Lombardo and his men worked for weeks on the flag, using sewing machines found and borrowed in the towns through which they were moving.

“It was a nice project for us,” Lombardo said in a 2018 interview with the Northwest Florida Daily News. “I think it helped everybody, reminding them of America and what we had over here.”

The flag was finished three weeks before World War II ended in Europe on May 8, 1945. Soon after, the soldiers who fashioned the homemade flag would go their separate ways as they were assigned new roles in the Allied occupation of Germany. Lombardo wound up in Nuremberg, preparing the Palace of Justice for the war crimes trials of various Nazis.

But before they split up, the members of Lombardo’s company called a special formation and presented him with the flag. Some years later, he offered the flag to the Smithsonian Institution, where a kindly curator there dissuaded him from making the donation, explaining the flag would be displayed for just a short time before being relegated to storage. Today, the flag is displayed prominently at the Fort Benning museum.

Lombardo arrived in America in 1929 with his mother and two sisters, coming through Ellis Island in the shadow of the Statue of Liberty three years after his father had come to the United States.

The family settled in Altoona, Pa., and 10 years after his arrival, Lombardo volunteered for the Pennsylvania National Guard. He attended Officer Candidate School, became a lieutenant in 1942 and was sent to Europe as part of Company I of the 394th Infantry Regiment in 1944.

Lombardo returned to the United States via New York by ship in 1945, seeing the Statue of Liberty for the second time.

“We came up and saw the Statue of Liberty which was a great sight,” Lombardo told the Veterans History Project, a Library of Congress initiative to collect firsthand stories from U.S. wartime veterans. “That was my second time seeing that beauty. Whatever little bit I contributed to the Army, I was just happy that I helped save the greatest democracy in the world. ... It meant more to see it the second time because I realized what I had helped protect. ... I’d earned my freedom.”

In addition to his book, Lombardo also wrote poetry. In 2012, he wrote this for a Memorial Day observance in Destin:

“This is our Memorial Day/ In our land of the free/ It’s because of those who sacrificed/ Whose graves you’re here to see/ They fought on foreign lands/ And across the open sea/ And paid the ultimate price/ To keep you and I free/ So put all things aside/ And honor this important day/ Which we have dedicated/ As our Memorial Day.”

Last year, Lombardo was one of four World War II veterans who, at the age of 100, participated in the coin toss for Super Bowl LIV in Miami Gardens.

“As we culminate the NFL’s 100th season, we’re extremely proud to honor four World War II veterans celebrating 100 years of life,” NFL Commissioner Roger Goodell said at the time. “These four men deserve our gratitude for their tremendous contributions to the United States of America and we’re thrilled to recognize their service on the country’s largest stage.”

But even in that serious atmosphere, Lombardo’s sense of humor surfaced. Recounting his Super Bowl LIV experience for the Daily News, he recalled how the veterans and their escorts, riding golf carts, passed groups of cheerleaders getting ready to take to the sidelines.

“They wouldn’t let us stop by them,” Lombardo said as an impish grin crossed his face during the 2020 interview. “They kept going. I said ‘Why don’t you stop for a minute? I just want to shake some hands.’”

Funeral arrangements for Lombardo are pending and are expected to be announced within the next few days, according to Rice. 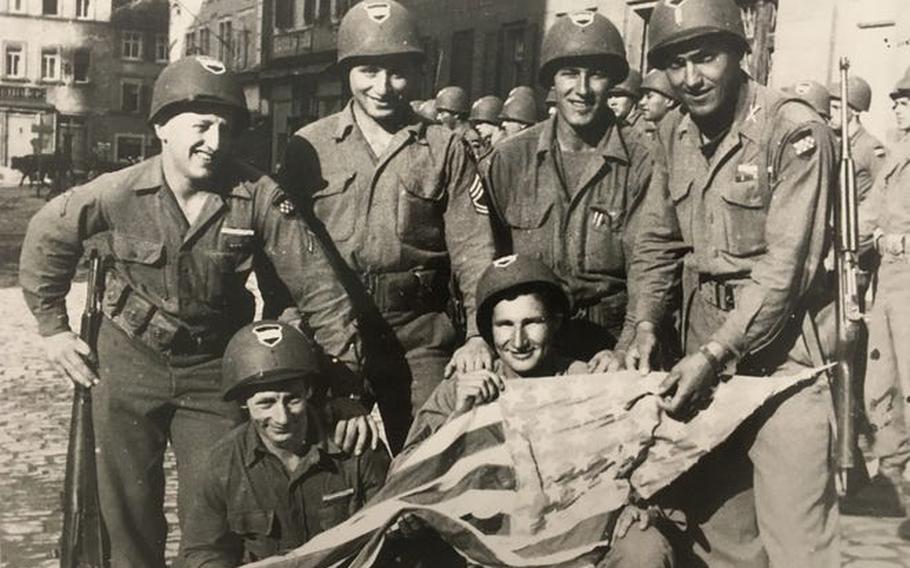