GREENSBURG, Pa. (Tribune News Service) — The final farewell is about to be sounded.

Tom Beaver opens the black case slowly. He slides white gloves on his hands. Then he lifts the silver-plated brass instrument. Taking a few steps, he moves toward the shelter.

The sun is shining. Wind is blowing through the nearby trees. Thousands of white crosses stand high in the plush green grass.

Beaver waits patiently outside the May 12 funeral service for Raymond Ladner, of West View, which is about to begin at the National Cemetery of the Alleghenies in Cecil, Washington County, a burial place for veterans and their spouses. Beaver is about to sound taps as part of military honors for Ladner, whose family has gathered for the final good-bye.

“I just close my eyes and think of the notes I will be playing,” said Beaver, of Bethel Park, after he sounded taps, the 24-note bugle call, at Ladner’s service. “It is definitely emotional.”

Beaver, a U.S. Air Force veteran, has sounded taps on 1,231 occasions to date. He uses a Getzen American Heritage Elite Bugle. Taps are sounded after a gun salute and before the folding of the American flag at military honors at a veteran’s funeral.

“Each time I sound taps, it is special,” said Beaver. He was standing on a hill at the National Cemetery of the Alleghenies overlooking the white crosses, an American flag flying nearby. “Even though I have sounded taps all those times, for this family today, this is the first for them.”

To arrange for someone such as Beaver to sound taps, a family goes through Bugles Across America. The organization provides qualified instrumentalists to sound taps at funerals and memorial services.

Taps performed live are “sound” or “sounded.” When a prerecorded version is presented, it is “played.”

Beaver recalled how emotional it can be to see a surviving spouse of a marriage that spanned six or seven decades. He recalled a husband and wife who died within hours of each other. Both were veterans. He sounded taps twice, once for each of them.

“I am not sure the younger generation understands the consequences of war,” said Beaver. His father, Walter Beaver, landed on Utah Beach during the D-Day Invasion of World War II and earned two Purple Hearts. “There isn’t as much focus on it today. But I do. And that’s why I am here.”

Beaver, 71, said his bucket list includes sounding taps at Arlington National Cemetery in Virginia and in Normandy, France. He practices daily, usually in South Park alongside his dog, Tucker.

Beaver sounded taps at the 2014 funeral for Wilbert Frisch, his band director at St. Canice High School in the Knoxville/ Carrick section of Pittsburgh. “I was honored to, in a small way, thank him for the talents that he developed in me some 50 years prior,” Beaver said.

Beaver started playing the trumpet in seventh grade. He was determined to learn how to sound taps for the first time to honor his friend, a World War II veteran named Jack Skerba, who died in July 2013.

He said it makes him feel “emotional” every time he sounds taps.

“I make it a point to read every obituary before a service so I can have a small connection to the deceased that I am about to honor,” he said. “On a personal note, I carry my father’s combat infantry badge in my uniform pocket that he earned on Utah Beach during the Normandy Invasion and sound taps also in his memory. While he returned, I think of the thousands who did not. I treat every funeral as if it was my first and only one.”

Beaver has sounded taps several times a week for years. Sometimes he is called to duty more than once a day.

After Ladner’s funeral, another procession filed in. The veteran’s widow approached Beaver and asked if he would sound taps.

“The family always comes first,” Beaver said. “If they ask me, I will do it. I am honored to sound taps. Taps is a veteran’s last farewell. The bugle call is reverent.”

He keeps several pairs of white ceremonial gloves in his bugle case, so he always has clean ones to protect the silver finish on the horn. He only touches the bugle with gloves on.

After sounding taps that second time on this day, Beaver opened the black case.

He placed the bugle in gingerly. He removed the white gloves. Then he closed the case.

Taking steps, he walked away from the shelter. The sun was still shining. The wind was still blowing through the trees.

The final farewell has been sounded. 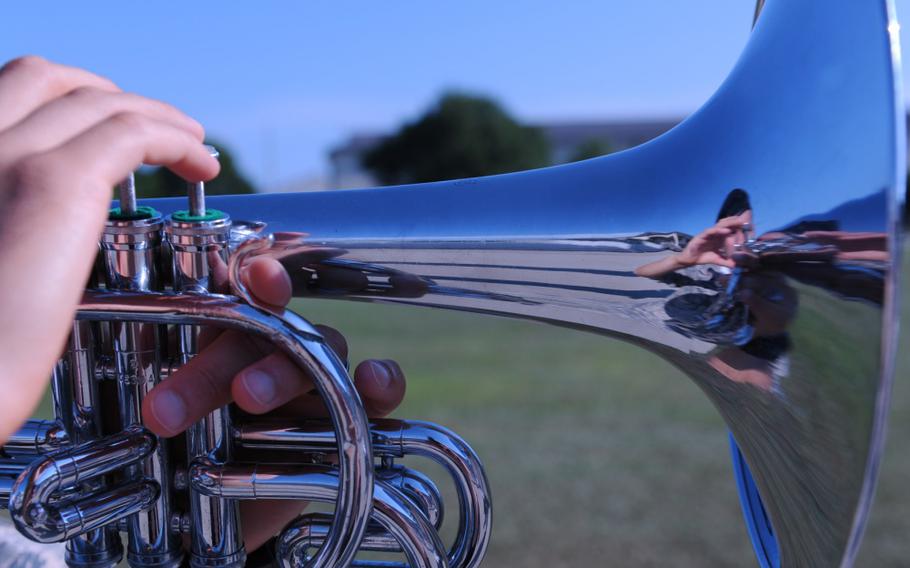 An airman plays a mellophone during a practice session at Keesler Air Force Base, Miss. on May 31, 2016. (Kemberly Groue/U.S. Air Force)