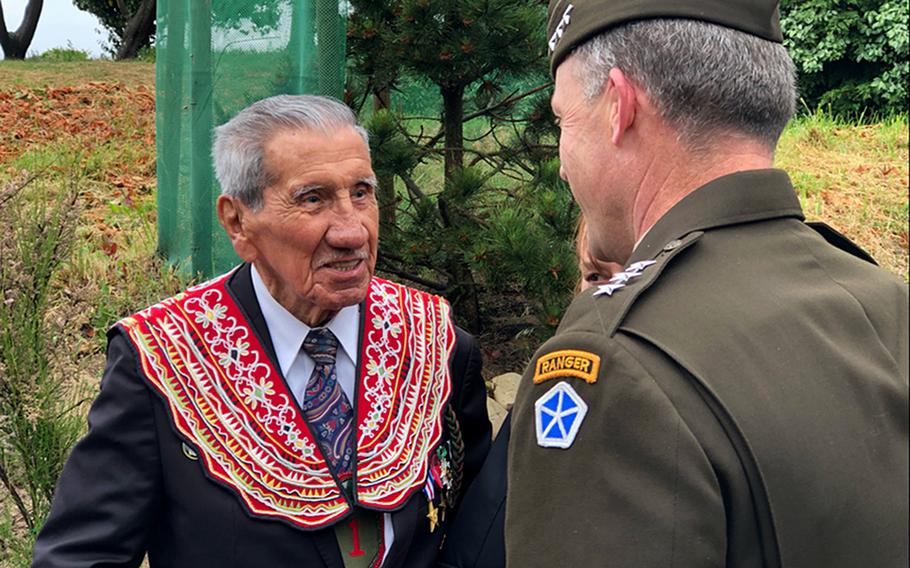 Charles Shay, a veteran of the D-Day landing at Normandy, meets with V Corps commander Lt. Gen. John Kolasheski during a ceremony June 4, 2021, at Omaha Beach. V Corps, which was recently reformed for a new mission in Europe, played a key role in the landing at Omaha Beach 77 years ago. (U.S. Army Europe and Africa)

U.S. Army V Corps soldiers faced the daunting task of taking Omaha Beach 77 years ago during the D-Day invasion of Normandy, where the unit’s current commander paid homage Friday to the troops who carried out one of World War II’s most daring missions.

“Omaha Beach was the most heavily defended of the landing areas,” Lt. Gen. John Kolasheski said during a ceremony overlooking the WWII battleground. “V Corps troops encountered the worst conditions on D-Day and suffered the highest number of casualties.”

The observance, two days ahead of the June 6 anniversary of D-Day, was held in special honor of one of the soldiers who was part of the first wave to hit Omaha Beach: retired Master Sgt. Charles Shay. 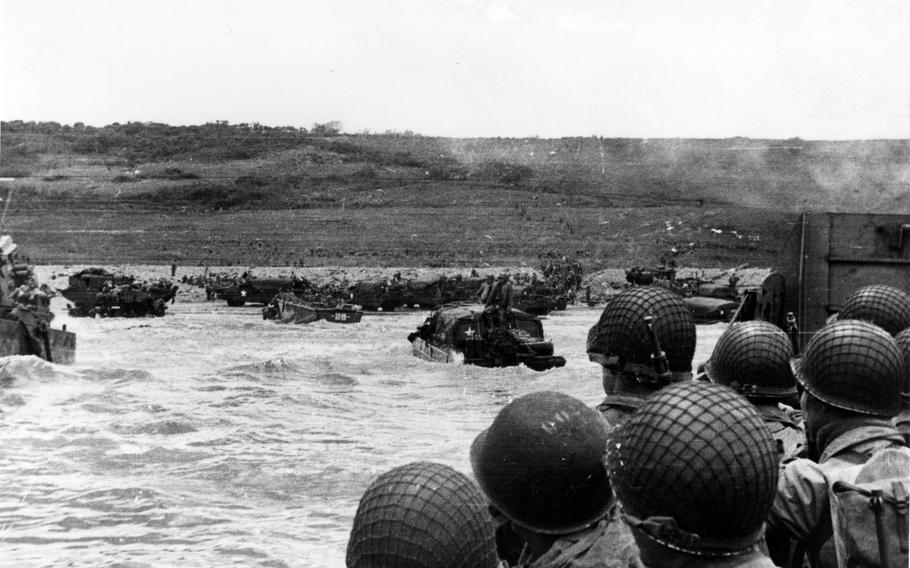 As a 19-year-old medic, Shay saved more than 20 soldiers under “the most grueling of conditions,” Kolasheski said.

Shay, 96, who now resides in Normandy, received the Silver Star for his actions.

Ceremonies in Normandy surrounding the D-Day anniversary are normally major international events, with thousands of people arriving from around the world to mark the occasion. This year, the events were scaled back again because of the coronavirus pandemic.

Kolasheski spoke before a small gathering of people about the sacrifices made during Operation Overlord. V Corps was responsible for 50,000 troops that were part of the Omaha Beach assault force, mostly drawn from the 1st and 29th Infantry Divisions.

In the first 15 hours of combat, V Corps suffered 2,500 casualties, but still managed to fight through the German defenses to secure the beachhead. “Soldiers laden with equipment were dropped off in water anywhere from waist-high to depths over their head,” Kolasheski said. “Many of these men drowned and those who didn’t were caught in a barrage of machine gun fire with no cover to be had. The first wave suffered almost 50% casualties.”

The landings at Normandy helped turn the tide of the war and paved the way for Allied victory over Nazi Germany a year later.

“When you think through what the people that participated back in June of 44 went through — holy smokes,” Kolasheski said in a phone interview.

For V Corps, honoring the contributions soldiers made during WWII ago takes on added significance this year given the command’s recent return to Europe. The Army expects the headquarters to be fully operational by fall, having been reconstituted nearly eight years after being inactivated.

The corps gives the Army an organization poised to take on command and control responsibilities of the service’s ground forces on the Continent. The move is part of a broader increase of capabilities in Europe, where concerns about a more aggressive Russia in recent years have prompted Pentagon planners to add forces after decades of drawing down.

Details are still getting worked out, but Kolasheski said he anticipates that V Corps will be the operational-level Army headquarters in Europe, with oversight over its brigades and rotational units. The corps also will focus on linking together with other allied land forces, he said.

With its main headquarters at Fort Knox, Ky., the 600-strong V Corps also has a forward base in Poznan, Poland that will eventually have about 200 troops.

V Corps history in Europe goes back all the way to World War I, when it earned the title “Victory Corps.”

“America and her allies have always been stronger together,” he said. “We were with you then. We are with you now.”