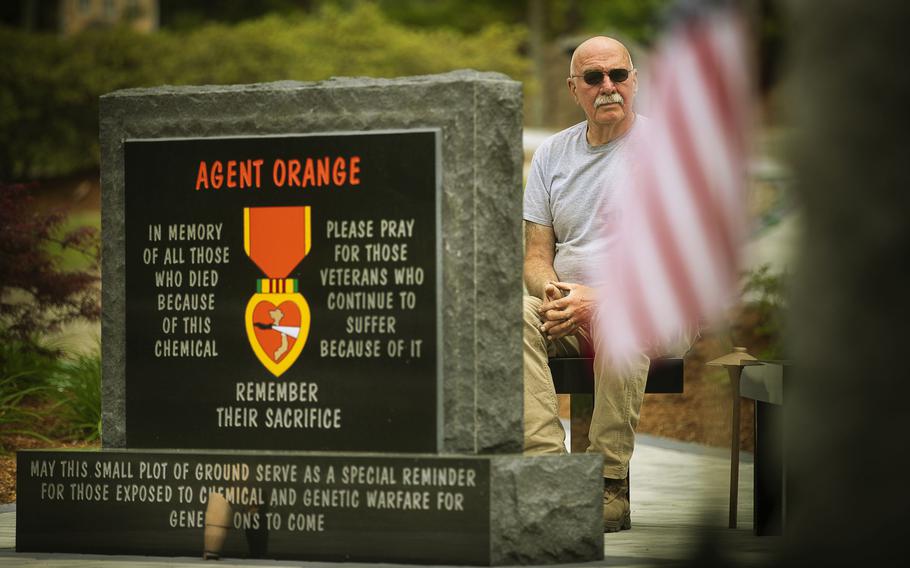 Vietnam veteran Gerry Wright has spearheaded the installation of an Agent Orange monument, funded entirely by donations, in the veterans park in his hometown. (Mark Mirko/Hartford Courant)

HARTFORD, Conn. (Tribune News Service) — As a young soldier in Vietnam, Gerry Wright stood on the back of a 5-ton tanker truck spraying roadside foliage.

But the U.S. Army veteran said he brought the toxic effects of Agent Orange home and has, like thousands of his fellow veterans, suffered various ailments ever since. The military recognizes 14 diseases caused by the chemical, including cancers and severe psychological and neurological problems. Three new conditions were added to the list of presumptive conditions by Congress just last year, though many have died waiting for their approval and related benefits.

The diseases affect both the 2.8 million veterans believed to have been exposed to Agent Orange, and their children and grandchildren.

To raise awareness and honor all those who were exposed to the herbicide, Wright has spearheaded installation of a monument in the veterans park in his hometown of Andover. An unveiling and dedication is set for Saturday. U.S. Rep. Joe Courtney and four Vietnam veterans, including former state Veterans Affairs Commissioner Linda Schwartz, are to speak. The ceremony also is to include several color guards, the singing of the national anthem by a Vietnam veteran and taps played by another veteran of the war.

Raised on a dairy farm in New York state, Wright served as a combat engineer in Vietnam from May 1969 to December 1970. His unit built roads, and part of the process was to spray herbicide along the roadway to kill thick foliage the enemy could use for cover. Superiors told him and other soldiers that the stuff they were dispensing in 2,500-gallon tankfuls was harmless to humans, Wright said.

But when wind blew the spray back at him, his nose burned, he said. He also developed sores, but it wasn’t until he returned to the States that the full effects became apparent, Wright said.

During the mid-1960s, U.S. chemical companies made and shipped large quantities of herbicides to Vietnam to wither enemy cover and crops, according to the U.S. Veterans Administration. About 12 million gallons of Agent Orange were shipped to Southeast Asia from 1965-70, before the Department of Defense suspended its use and then incinerated remaining stockpiles in 1977.

In 1984, the U.S. Environmental Protection Agency found that a byproduct of the manufacturing process for Agent Orange was associated with ill health, including cancer, in exposed animals and humans, according to the VA. The Agent Orange Act of 1991 “established a presumption of service connection” for certain diseases in veterans exposed to the defoliant.

Over the years, Wright said other veterans of his unit got sick and some died of heart disease, cancer and other illnesses. Wright, who also served in the Connecticut National Guard from 1982-99 and retired as a first sergeant, said his ailments have included muscle loss and weakness, neuropathy and atrial fibrillation. He said he is being treated under his veterans benefits.

Wright said he felt so strongly about Vietnam veterans who were “sprayed and betrayed” that he took to the road after selling his businesses in Bolton, the Happy Hauler Towing and Recovery and Happy Hauler RV Storage. In 2018, he drove an orange Honda Goldwing trike around the nation, gathering signatures on a petition to expand treatment for Agent Orange.

In Ennis, Texas, Wright said he saw an Agent Orange monument and decided Connecticut should have a similar memorial. He contacted Nolan’s Hamden Monument Co. in Hamden and ordered the inscribed stone.

More than enough donations came in to cover the $21,500 cost, and Wright said he used some of the extra money to plant flowers, trees and grass around the monument this year. The installation also includes brick walkways with individually inscribed bricks paid for by donors.

“Everyone who donated is part of that monument,” Wright said.