Deported immigrants who served in US military feel forgotten, want to return home Francisco Lopez was drafted at a teenager to go fight in the Vietnam war in 1967. He became a drug addict upon returning to the U.S. and was prosecuted for drug possession and consequently deported to Mexico. He remains hopeful that one day he can return to what was his home for most of his adult life in the U.S. In this photo, Lopez holds a photo of himself as a teenager in military attire in the “Juarez Bunker,” a support shelter for deported veterans. (Omar Ornelas, El Paso Times/TNS)

JUAREZ, Mexico (Tribune News Service) — Mike Evans, an honorably discharged U.S. Marine, was two weeks away from taking the oath to become a U.S. citizen when the FBI picked him up on a felony drug conspiracy charge. After pleading guilty and finishing a four-year sentence, immigration officers escorted him to the border in Eagle Pass, Texas, and ordered him to walk south.

The then-31-year-old veteran was being deported to Mexico to begin what he describes as a “life sentence.” Mexico was his birthplace, but by then it was then a strange land, a country he left behind as a toddler.

It was 2009 and Evans felt like he was being deployed to a war zone. He made his way to Juárez, where he said, “There were more people dying every day than in Afghanistan.” The city was teeming with armed military and federal police convoys amid a bloody turf war between rival drug cartels.

More than a decade later, Evans is still in Juárez, now his home.

This Memorial Day, Evans will join other veterans to honor not only fallen soldiers, but those, who like him, feel forgotten. Joining them will be a couple members of the Degar tribe, an indigenous group native to the highlands of Vietnam, that allied with U.S. troops during the war. The Degar, better known as Montagnards — the name given to them by French colonizers, have since suffered persecution and genocide by the Vietnamese government. The U.S. held off on its promise to give refuge to its Degar allies until 1986, 13 years after the end of the war.

The group will gather for a cookout on the Mexican side of the binational Chamizal Park. In past years, deported veterans have gathered at this same spot for military salutes. The park is less than half a mile from the country they risked their lives to protect and are now banned from reentering.

The exact number of deported U.S. veterans is unknown. A 2019 report by the Government Accountability Office found that Immigration and Customs Enforcement, the federal agency in charge of deportations, does not keep complete data on U.S. military deportees. The GAO also found that ICE doesn’t always follow its own policy of considering veterans’ service records before removing them. Between 2013 and 2018, 44,000 noncitizens enlisted in the military, according to the report. In that five-year span, the GAO found files for 92 veterans who were deported. Advocate organizations estimate the number is higher, at least in the hundreds. 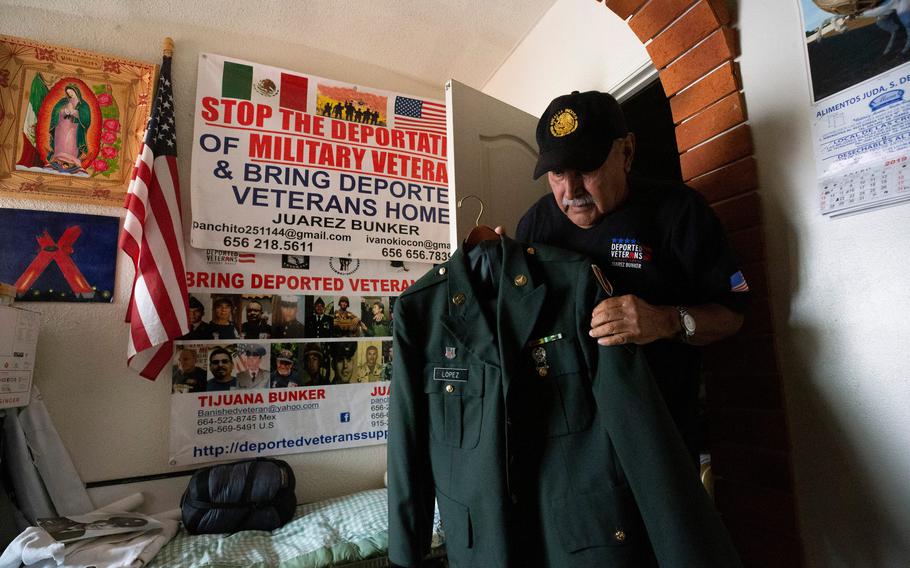 Francisco Lopez was drafted at a teenager to go fight in the Vietnam war in 1967. He became a drug addict upon returning to the U.S. and was prosecuted for drug possession and consequently deported to Mexico. He remains hopeful that one day he can return to what was his home for most of his adult life in the U.S. In this photo, Lopez shows his military uniform. (Omar Ornelas, El Paso Times/TNS) 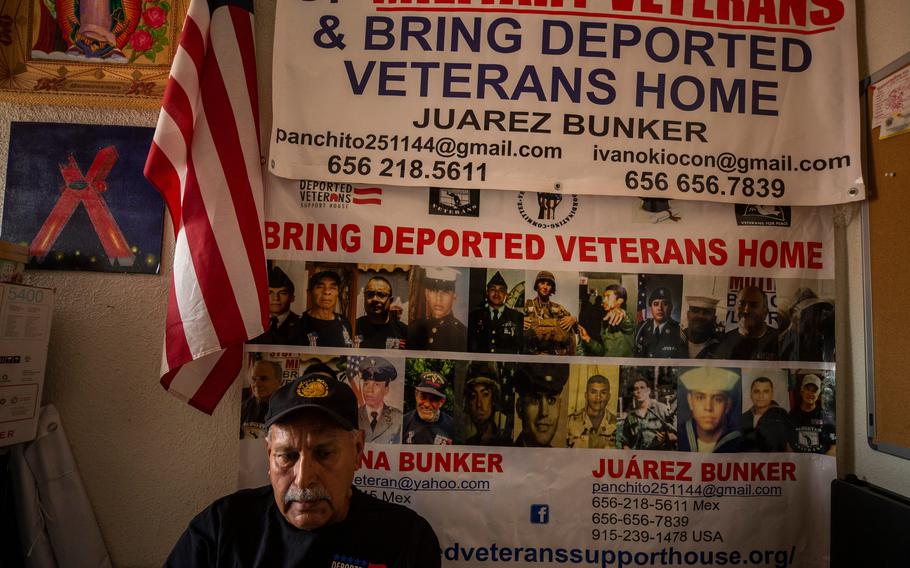 Francisco Lopez was drafted as a teenager to go fight in the Vietnam War in the U.S. Army in 1967. (Omar Ornelas, El Paso Times/TNS) 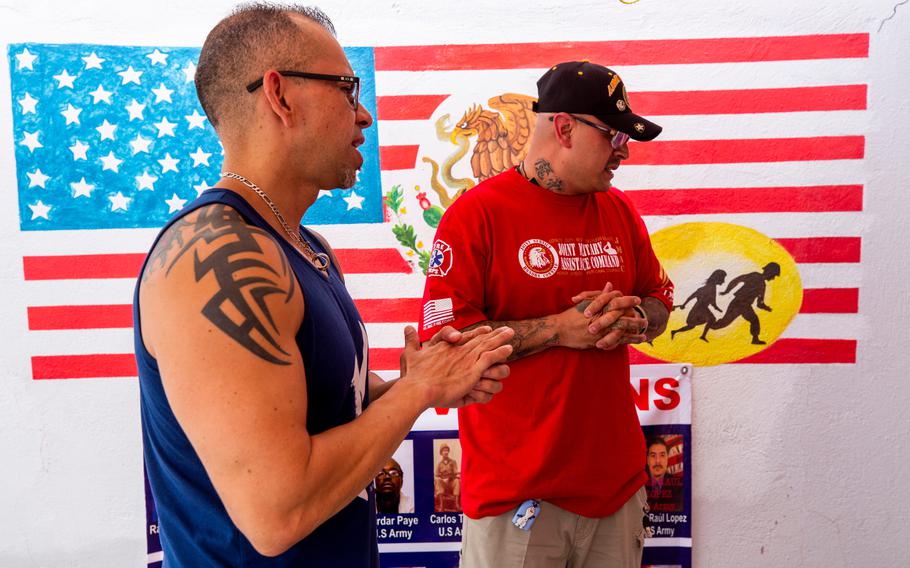 No easy way back home

In recent years, deported veterans have become more vocal about their plight, catching the attention of artists and politicians. They were featured in the Netflix documentary “Immigration Nation” and are depicted in murals in cities across the U.S. The Las Cruces City Council in New Mexico designated March 15 as “Honoring our Deported Veterans Day.” But legislative attempts to allow exiled veterans back into the U.S. have thus far failed or stalled. For now, the surest way for a deported veteran to legally return is after they die and are repatriated for their military funeral. Others have managed to return thanks to official pardons or deft attorneys who reverse their deportations in court.

“It’s kind of hypocritical that the United States will say, ‘Thank you for your service,’ but at the same time be quick to kick us out,” Evans said. “I understand that what I did was wrong. I went to jail for that. … That was enough punishment.”

Like Evans, most service members are deported because of a criminal record. The GAO reports that past deportees have had felony convictions related to drugs, sexual abuse, homicide, assault and theft. Others have been deported after drunken driving arrests.

Those first years in Juárez were rough, Evans said. He rented a cinder-block apartment with a bedroom window that framed the Wells Fargo building in Downtown El Paso. The view seemed to mock him, a daily reminder of a life he could no longer have. His first job was dressing up as Santa Claus for the Mexican cellphone company Telcel. He later worked as a data processor for Xerox in Juárez, where he made about $12 a day.

“It was just so defeating,” Evans said. “It’s like starting a game of chess and taking (your) queen off the board. It’s really hard to win.”

Welcome to the ‘Juárez Bunker’

One day, by chance, Evans met another deported veteran named Francisco Lopez. In 2017, Lopez converted the two-bedroom, two-bath home he shared with his wife into a shelter for deported soldiers. Now, Lopez calls his home the “Juárez Bunker” after a similarly named shelter in Tijuana.

Lopez was drafted to fight in Vietnam in 1967 at age 23. He was a legal permanent resident originally from the Mexican state of Coahuila. At the time, he spoke no English. Like many soldiers of that era, Lopez experimented with marijuana and then cocaine. When he came home, he struggled with addiction and began selling to support his habit. He got caught, was sentenced to nine years in prison, and was deported in 2003 at age 60.

“Sometimes when I sleep, I wake up in the middle of the night sweating a lot and screaming like a nightmare,” Lopez said. “A doctor came from the United States and they checked us. I got 80% disability for PTSD.”

The “bunker” is now adorned with family photos and Lopez’s paintings of landscapes and portraits— his new habit. The 76-year-old rehabilitated in prison and now finds solace in art and activism. Newly deported soldiers come to his place and eaa home-cooked meal, do their laundry, or sleep in the spare bedroom or a cot in a small second-floor loft.

Younger deportees like Evans see Lopez like a grandfather. They call him “Panchito.” Lopez has his own grandchildren in the U.S. — some whom he’s never met. Veterans at the Tijuana shelter helped him and other Juárez deportees apply online to receive a monthly check from the military. The checks are pensions for Vietnam era veterans or compensation for soldiers injured during their service.

Evans is now 43 and doing much better. He learned how to DJ and made better money working five nights a week at a Juárez bar. He still does occasional gigs and also receives a monthly military check. Today, he likes to meet friends for coffee at Starbucks and play Conquian, a Mexican card game he first learned in prison. Most weekdays, he works out for two hours at a gym.

Some deported veterans have died in Mexico. The Juárez and Tijuana shelters know of at least ten in the past two years. One died in a car accident. Another is believed to have been killed in drug cartel hit. Some died because of health conditions. Deported veterans living outside the U.S. struggle to get access to adequate medical care. They include Francisco “Panky” Rodarte, a U.S. Army veteran who served in Vietnam. Rodarte died in a Mexican hospital in late 2019. He needed heart surgery but couldn’t afford it. His friends and family fundraised for him but couldn’t come up with the money in time.

Y-Duen Buondap, 63, a member of the Degar tribe of Vietnam, will join the deported veterans in Juárez on Monday. He was 12 when the Vietnam War started. He said his stepfather was killed fighting alongside American troops. After the U.S. withdrew, he said, his mother and brother were kidnapped by the Viet Cong. Buondap survived years of persecution before being granted asylum in the U.S. He’s now a U.S. citizen living in North Carolina with his wife and three kids.

Buondap said he’s traveling to Juárez because he feels a kinship with the veterans living there.

“They have been deported, like they’re forgotten,” Buondap said. “It’s the same for me; they forgot us in the same way. We have to stand up together and speak up to let them forget us no more.”

Buondap will get to Juárez with help from All Relations United, a Las Cruces-based nonprofit that aids Native American and indigenous communities.

Veteran activists with the Tijuana “bunker” recently began talks with the Department of Homeland Security and the Department of Veterans Affairs to see what can be done for the deportees. The activists have partnered with the American Civil Liberties Union and other advocate organizations to draft a letter to President Joe Biden asking for help.

Most deported veterans have family in the U.S. For them, family is the main motivation to return. Evans’ adoptive 80-year-old mother lives in Cincinnati. She has a pacemaker and has suffered at least one stroke. Evans’ said his American sister is his “best friend” and he has two nieces in the U.S. whom he’s never met.

“Even if they (the U.S. government) said, ‘We don’t want you to live here,’ that’s fine. Just let me visit. Let me be a part of my mother’s life, my niece’s life. Before my mother goes, or if she gets sick, let me hold her hand,” Evans said.