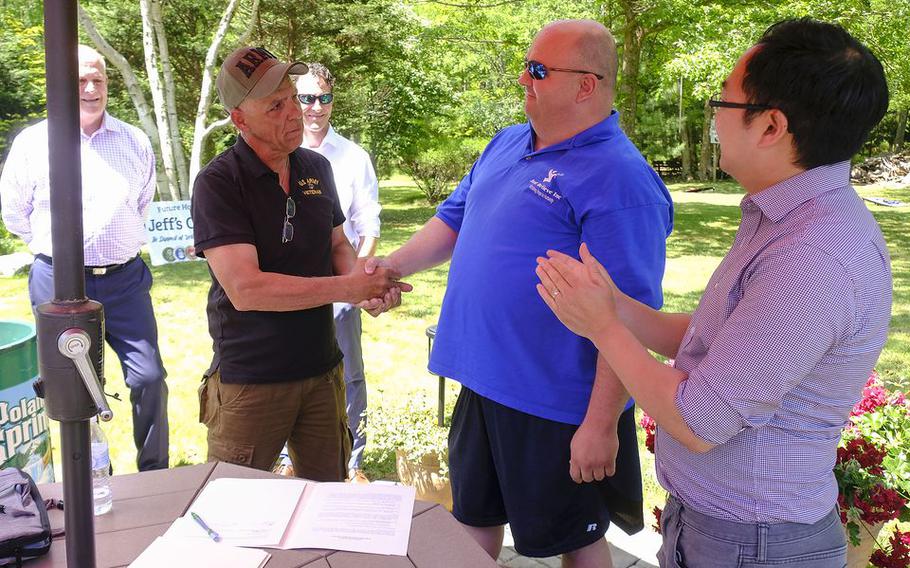 Memorial Day came a little bit early this year for Marty Weber and Jeff Poissant. On Thursday, with his congressman and several others looking on, Weber signed a letter of intent to donate 36 acres of wooded property in Barnegat Township for use as a group home, rehabilitation facility and quiet retreat for homeless veterans struggling with addiction and mental illness, to be known as “Jeff’s Camp,” in memory of Poissant.

On Thursday, with his congressman and several others looking on, Weber signed a letter of intent to donate 36 acres of wooded property in Barnegat Township for use as a group home, rehabilitation facility and quiet retreat for homeless veterans struggling with addiction and mental illness, to be known as “Jeff’s Camp,” in memory of Poissant.

The two men met in the late 1980s while both were in the U.S. Army stationed in Germany, then became business and life partners for three decades before Poissant died four years ago of bladder cancer at age 56.

“I didn’t even know I was attracted to men,” said Weber, dressed in a pea green Army cap and a black Army polo shirt, his skin leathery from three decades as Poissant’s partner at YoBuck Landscaping. “I met him, and we fell in instant love. We did.”

“He knew, but I didn’t,” said Weber, who had fathered a daughter with a woman when he was 17, and now has a granddaughter in college. “We were two peas in a pod. He was a helicopter crew chief, and I was a truck driver. So we had land and air.” 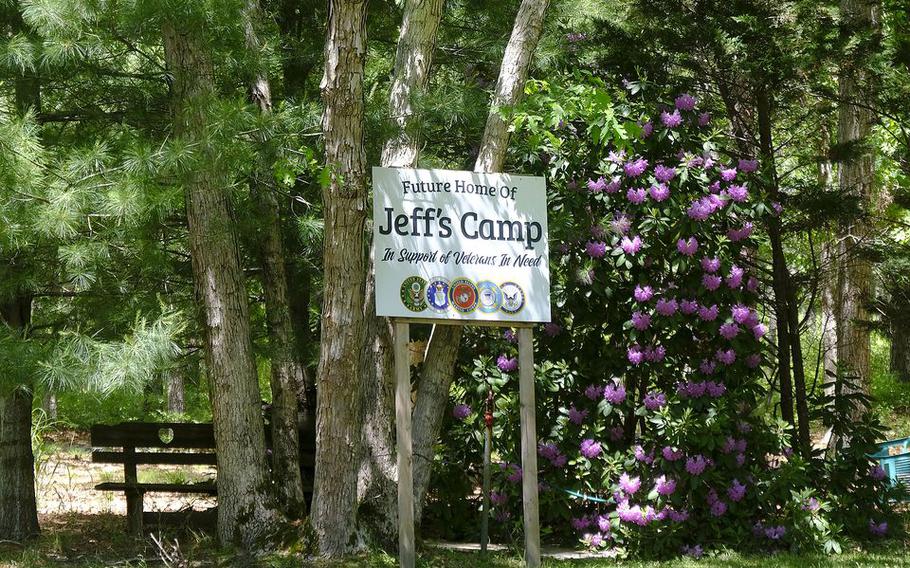 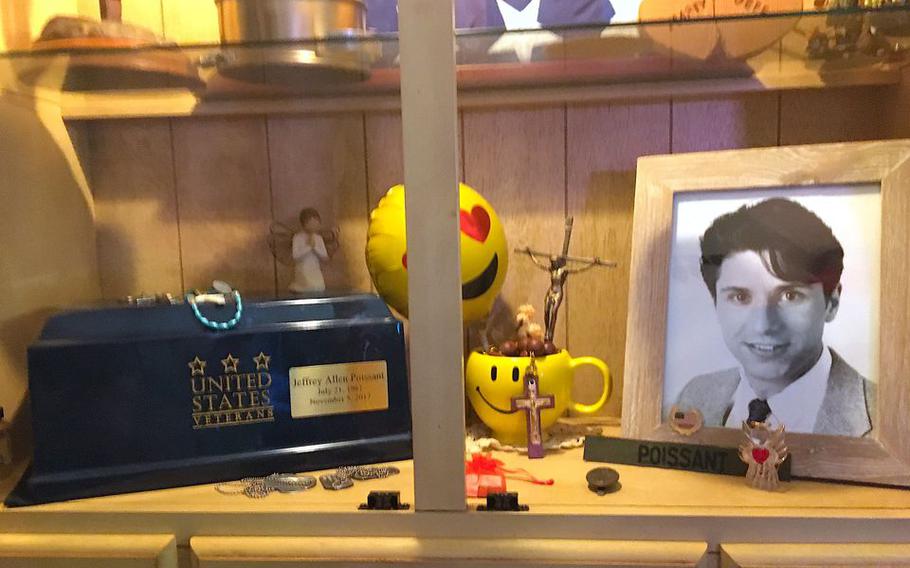 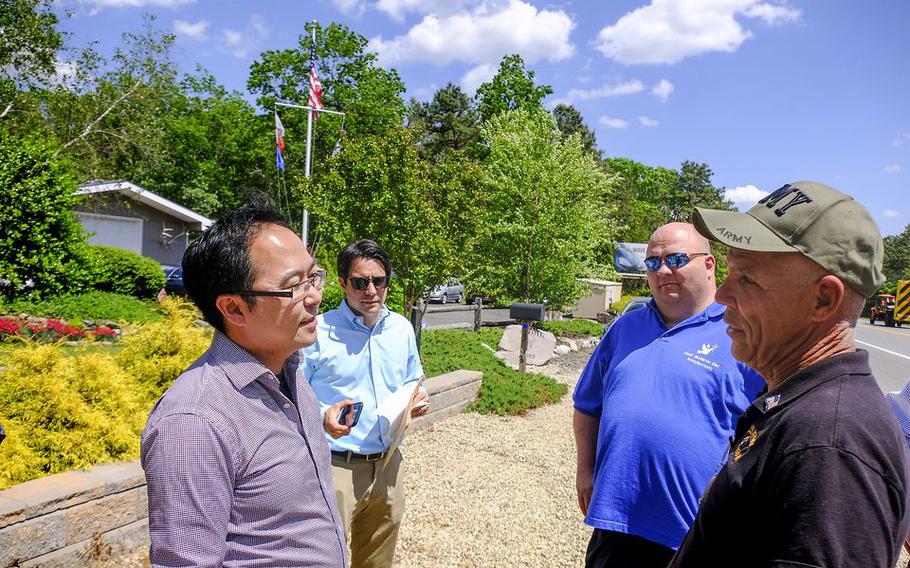 Marty Weber, right, the owner of the land talks to Rep. Andy Kim, left, as Just Believe director Paul Hulse, 2nd from right, listens as they stand by some of 36 acres being donated. (Aristide Economopoulos/njadvancemedia.com)

Three decades ago, after they left the Army, the couple bought a house on Route 72 where Weber still lives, and then a larger adjacent property adding up to the present 36 acres. They had a civil union, but were never married.

On a shelf in a glass case in the living room — below the mounted head of the buck that Weber, an avid hunter, had bagged — was a small shrine to Poissant that included a framed photograph of him as a young man and a marble urn containing his ashes. A bronze plaque on one side of the urn identifies the remains as those of Jeffrey Allen Poissant while an inscription in the center reads, “United States Veterans,” plural.

“I’m going on the other side,” said Weber.

He said the couple had always envisioned somehow using their Ocean County Ponderosa to help fellow veterans, and he felt compelled to realize that dream following Poissant’s death, which Weber believes could have been prevented if the Veteran’s Administration had approved bladder replacement surgery for him.

“We thought about a cemetery for the vets,” said Weber, adding that he had been offered $3 million for the commercially and residentially zoned property by a developer. “But this is going to keep them alive.”

A friend and fellow Army veteran from Bayville, Keith Petterson, suggested that Weber get in touch with the head of a local homeless outreach organization looking to create a home for homeless veterans. That person was Paul Hulse, director of Just Believe, a group he founded in 2019 that operates Toms River’s Code Blue warming shelter at Riverwood Park.

“They made a phone call, and this is what happened,” Petterson said.

The vision for Jeff’s Camp includes an 8,000-square-foot building along Route 72, which would be divided between a treatment facility operated by a Marlton-based healthcare provider, New Life Addiction Services and a thrift store run by Just Believe.

As New Life does at its existing facility, it would provide initial week-long detoxification care, followed by an intensive outpatient recovery program of three hours a day once the veterans move into the residence elsewhere on the property, said the company’s co-founder and administrator Joel Albano.

“I think the combination of things, the thrift store, counseling on the premises, whole groups in the woods, all those things, it’s just tremendous,” Savon said.

The thrift store, like one already operated by Just Believe in Toms River, would employ the veterans living on the property, stocking and selling the donated clothing and other merchandise, as a means of reintegrating them into society through regular work and interaction with the public, Hulse said.

Set back from the road, amid the scrub pines that rise from the sandy soil of the Pinelands National Reserve, Hulse said the veterans’ “sober living residence” would include seven bedrooms, each shared by two vets, plus dining, living and other common areas, as well as space for support group meetings.

“While (New Life) is working with them on the medical side, we can work on the rehabilitative/vocation side, getting them back into society, touching people, getting back into that public eye and getting people what they need. That’s what the store is going to do.”

By living under the same roof, the veterans would form a natural support group with a very strong, specific bond they would not share with non-vets.

“They know more about their circumstances together than we do,” Hulse said.

Hulse said the physical imprint of the project and the number of residents would be deliberately modest so that the community, the township, and the Pinelands Commission, which would also have to lend its approval, would be comfortable with it. The site’s natural setting is also a key therapeutic element.

“There will be hiking trails where they can walk the property,” said Hulse. “It’s a retreat — ‘Jeff’s Camp’ — so we don’t want to take away the land, we want to preserve it.”

The estimated cost of the project is $2.5 million, which Hulse hopes to raise through private contributions and grants. Fundraising has only just begun, and overlaps with the early stages of a more modest plan by Just Believe for a sober living home in the Parkertown section of Little Egg Harbor for six residents, not necessarily veterans. Hulse said Just Believe has raised $20,000 toward the $300,000 cost of the Parkertown project.

Just Believe’s use of the club for a Monday golf outing is also thanks to Weber, a former Republican who had booked a July 2020 campaign fundraiser there during his unsuccessful run for Congress last year. The fundraiser had to be canceled due to the pandemic, leaving Weber with a paid reservation that will now help raise funds for Jeff’s Camp.

In just one example of the strange bedfellows the project has made for, Weber’s Democratic opponent in the House race was Rep. Andy Kim (D-NJ), who was on hand for Thursday’s document signing, when he and Weber — along with almost everyone else — exchanged hugs.

“Now, we’re friends,” said Weber, who’s running for office again this year, for one of two seats up for grabs on the Barnegat Township Committee.

But this time he’s running as a Democrat, after the Regular Republican Organization of Ocean County failed to back him in the June 8 primary, and Democrat Charles Cunliffe invited him to switch parties and be his running mate. Both primaries are uncontested and Weber and Cunliffe will face Republicans Pat Pipi and William Farmer in November.

Kim, now in his second term representing the 3rd Congressional District, is not a veteran, but he served as a civilian advisor in Afghanistan to Generals David Patraeus and John Allen, and he now sits on the House Armed Services Committee.

Pressed on what role he and the federal government might play in the Barnegat project, Kim said money from the latest COVID-19 stimulus package, the American Rescue Plan was one possible source of funding, and that he had already directed a staffer to look into government grants that Jeff’s Camp might qualify for.

“But I don’t want to get ahead of the folks here,” Kim said. “What I wanted to do was come see what they’re doing, get a better sense of what the latest is and where it stands, and then we can continue to brainstorm and figure out what might make most sense.”

“If ever there was an issue that tries to unite our country it would be about supporting our veterans,” Kim added. “So this is something where it should be all hands on deck. It should be a no-brainer to everybody.”