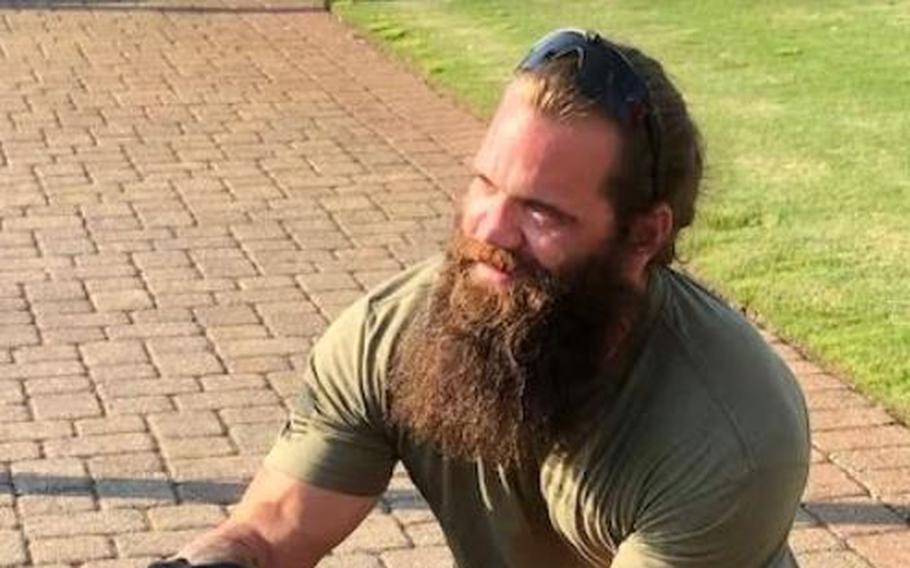 The event is called SET 22, with the SET standing for strength, endurance, and training. Speyrer said the 22 refers to the number of veterans who take their lives every day.

Beginning at midnight Friday, Speyrer and fellow cyclists Sean Kamm and Kathleen Carrier made four loops by bike around Destin and Scenic Highway 98 for a total of 100 miles. About noon Saturday, he started off on foot with about a dozen other runners to make one more loop around Destin, racking up a 26.2-mile marathon.

To cap off his day, Speyrer then took to the track at Destin Elementary School about 9 p.m., where he was joined by 25 to 30 people who cheered him on in the dark as he flipped a 200-pound tractor tire around the track for total of 1 mile. He finished the challenge about 10:45 p.m. Saturday.

"People ask, 'Why do you put yourself through this,' " said Speyrer. "I know what it's like to feel like there's no hope. It's all about giving back hope to these men and women who suffered."

Speyrer credits sponsors, supporters, fellow athletes from the 1st Phorm community and runners from the Crop Dusters and Destin running groups who joined him with helping make the event a success.

"This wasn't a me thing," said Speyrer. "This isn't about me; we had people coming in from the Midwest, the East Coast, the West Coast."

Collectively, all those efforts so far have raised about $12,000 for Healing Paws for Warriors, a local veteran-founded nonprofit that provides trained service dogs to veterans who are faced with post-traumatic stress, traumatic brain injury or military sexual trauma.

"We're unable to run this program unless we get community support through donations, fundraisers, etc., so we're very thankful for this opportunity," said Healing Paws for Warriors co-founder Sheila Hale.

"Geoff is an example of a veteran giving back, pulling the community together and making a difference," Hale said.

Despite battling winds that added about three hours to the bicycle ride, Speyrer said he was happy with how this year's challenge went and plans to make next year's even bigger.

"This is just the beginning," he said. "It's just going to get bigger and bigger."