'They’re trying to deny us until we die': Veterans hope new toxic exposure bill will spur change at VA Then-Air Force 1st Lt. Brian Liebenow at Kandahar Air Base in Afghanistan in 2002, where he was serving with the 23rd Special Tactics Squadron. A year earlier, Liebenow was at Karshi-Khanabad Air Base in Uzbekistan. (Brian Liebenow)

Then-Air Force 1st Lt. Brian Liebenow at Kandahar Air Base in Afghanistan in 2002, where he was serving with the 23rd Special Tactics Squadron. A year earlier, Liebenow was at Karshi-Khanabad Air Base in Uzbekistan. (Brian Liebenow) 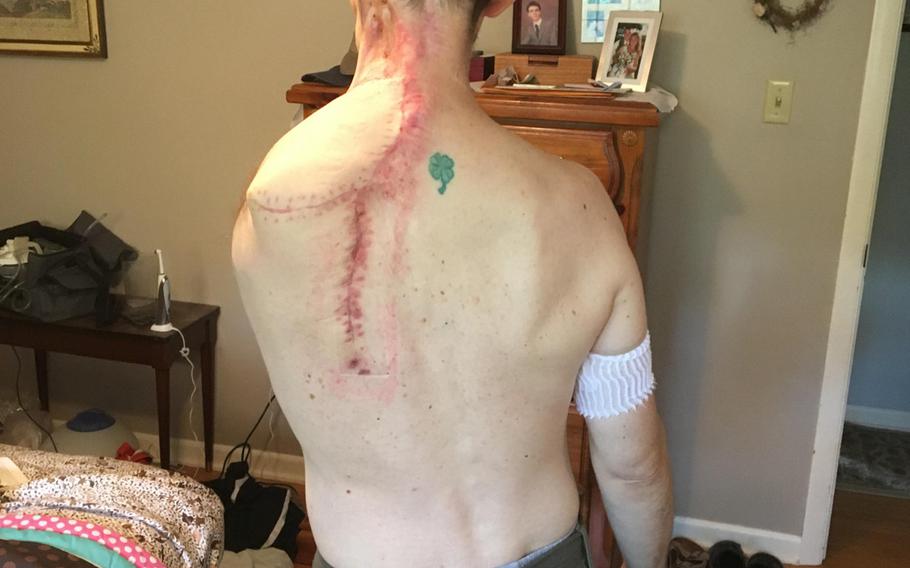 Former Air Force Maj. Brian Liebenow shows the scar that runs down his back since he had surgery in September 2016 to amputate his left arm, part of his clavicle and three ribs. The surgery was needed after a wound failed to heal after Liebenow had skin cancer. (Betsy Liebenow) U.S. troops and Uzbek workers help build Camp Stronghold Freedom at Karshi-Khanabad Air Base in Uzbekistan in 2001. Hundreds of U.S. troops who served at the base, known as K2, between 2001 and 2005 have been diagnosed with cancer, but the Department of Veterans Affairs has said it does not have enough proof to link their illnesses with exposure to toxins at the base. (Mark Jackson) 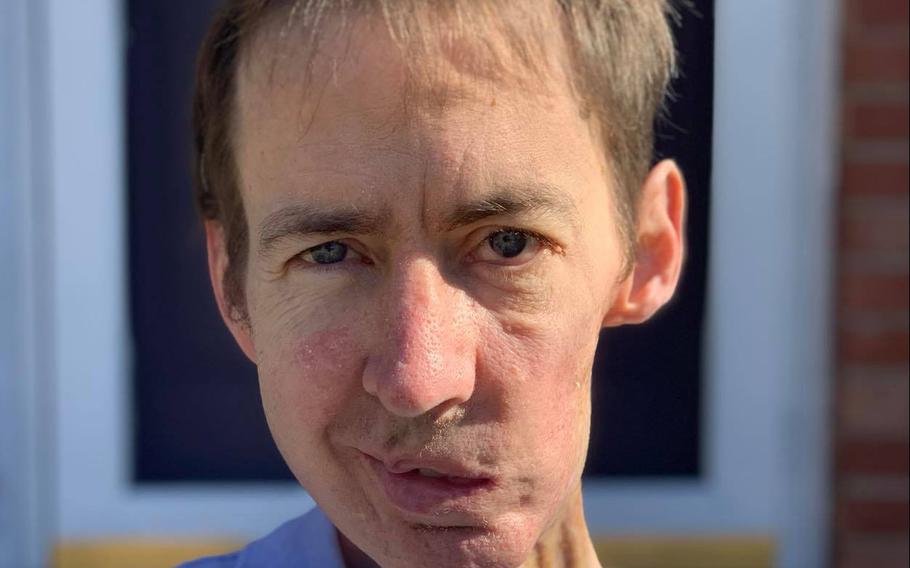 Former Air Force Maj. Brian Liebenow poses for a photo outside his home in Knoxville, Tenn., in November 2020. Liebenow had his left jawbone removed after it was severely damaged by radiation therapy for cancer. (Betsy Liebenow) Sandbags surround a tent at Karshi-Khanabad Air Base in Uzbekistan, which was used by the U.S. Army, Air Force and Marine Corps between 2001 and 2005 to launch support missions into Afghanistan. Troops say the sandbags were filled with radioactive dirt, one of many toxins they were exposed to at the base. (Mark Jackson) Army Staff Sgt. Mark Jackson poses in front of ''Flintstone Palace'' at Camp Slayer, Baghdad, in 2007. Jackson was exposed to toxins in Iraq, Afghanistan and Uzbekistan when he was deployed after the attacks of 9/11. (Mark Jackson) 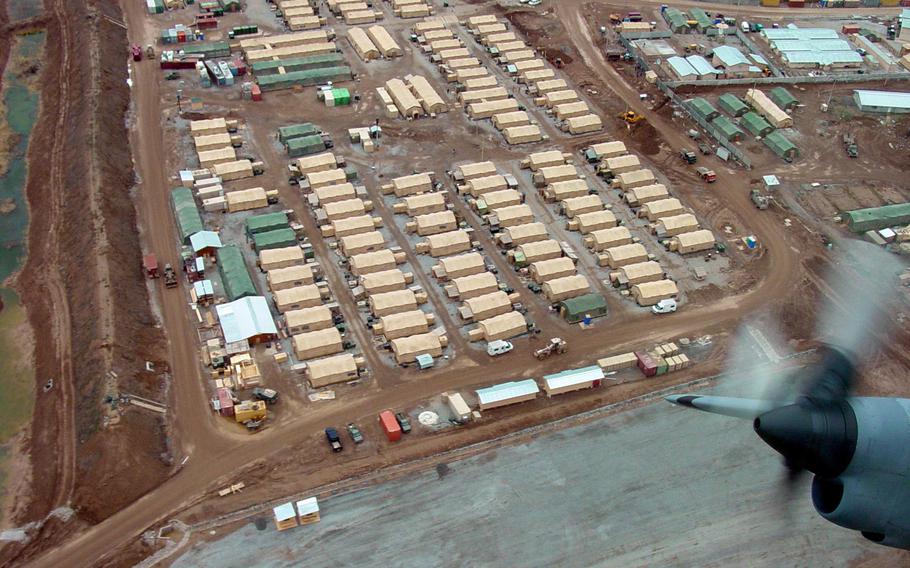 An aerial shot of Camp Stronghold Freedom at Karshi-Khanabad Air Base in Uzbekistan in 2002. Hundreds of veterans who have had cancer believe it was caused by exposure to toxins at the base. () 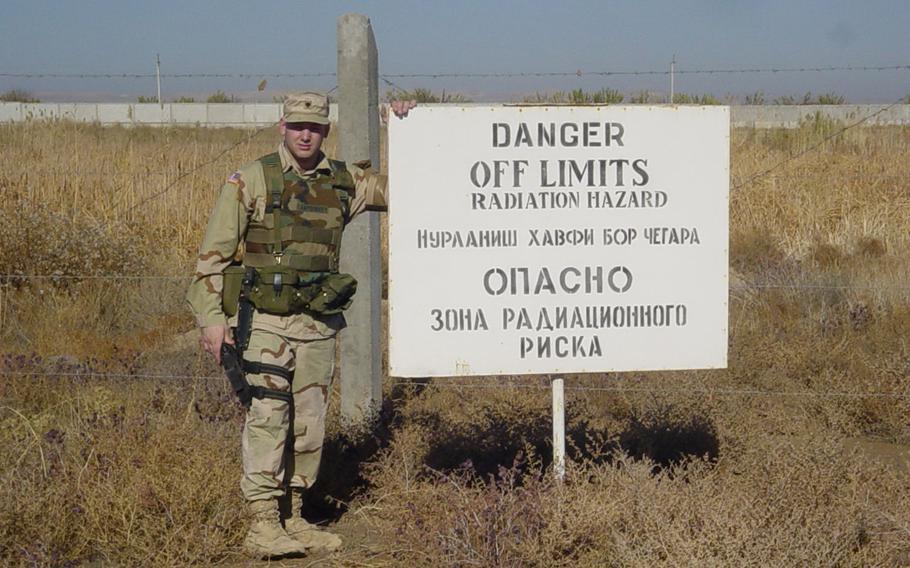 A U.S. service member stands by a sign warning of radioactivity at Karshi-Khanabad Air Base, Uzbekistan, where the U.S. had troops from 2001-2005. Many of the soldiers, airmen and Marines who deployed to the base, known as K2, have had cancer in the years since then. (Mark Jackson)

In the 19 years since he served at Karshi-Khanabad Air Base in Uzbekistan, former Air Force Maj. Brian Liebenow has had at least two types of cancer, lost half his jaw to radiation damage, had one of his arms amputated and eats through a tube in his stomach.

He is one of hundreds of veterans who have come down with cancer and other illnesses after serving at the former Soviet base, which the U.S. used between 2001 and 2005 to support the war effort in Afghanistan.

Defense Department documents declassified last year show the Pentagon knew troops were exposed to multiple toxins at the base, known as K2, and that exposure to those toxins caused hundreds of cancer cases and killed dozens of veterans.

But the Department of Veterans Affairs has denied many of the sick veterans care and disability benefits, often arguing that data don’t conclusively show a connection between their illnesses and their service.

“I ask the VA to please listen to veterans and get this done for all of us,” Liebenow told Stars and Stripes in a phone interview. “Listen and learn before it’s too late. A lot of these people are dying right now.”

In recent months, lawmakers and advocacy groups have been pressuring the VA to provide benefits for K2 and other veterans sickened by exposure to toxins.

Seven pieces of legislation have been introduced in Congress and President Donald Trump signed an executive order about toxic exposure at K2 during his final hours in office. The 2021 National Defense Authorization Act also requires the VA to conduct a study of illnesses and deaths among veterans stationed at the base, with findings due by June 30.

But veterans advocates say the VA isn’t following through. VA officials did not respond to a Stars and Stripes request for comment on the study.

In the 3 ½ months since the NDAA was passed, the VA hasn’t contacted Liebenow or anyone else at the Stronghold Freedom Foundation, a group that seeks to increase awareness of the effects on veterans of toxic exposure at the Uzbek base, about the study.

“It’s like they don’t want to know or they’re choosing not to find the information about toxic exposure,” Liebenow said.

Many of the bills have gone nowhere, said Mark Jackson, a former Army investigator who served in K2, Afghanistan and Iraq and was diagnosed this month with severe osteoporosis. The 43-year-old has had a nonfunctioning thyroid and gastrointestinal issues for years.

“Most of the bills came out of committee, went into conference and got stripped down to, in the K2 bill’s case, a six-month study,” he said, referring to the K2 Veterans Toxic Exposure Accountability Act, introduced in February 2020 by Rep. Mark Green, R-Tenn., a veteran of the wars in Iraq and Afghanistan.

“A lot of these bills give the VA time to look at the evidence,” said Jackson, who is now a federal investigator and chair of the Stronghold Freedom Foundation. “But we don’t have time.

“Half of us who were at K2 are sick and the oldest are in their 50s. I get it – the older we get, the more funerals we go to but none of the ones I go to are for old people.”

On Tuesday, Jackson will be one of several veterans at the launch on Capitol Hill of yet another toxic exposure bill.

But the War Fighters Act, introduced last month by Sens. Kirsten Gillibrand, D-N.Y., and Marco Rubio, R-Fla., doesn’t call for another study. Instead, it wants to establish a service connection for illnesses caused by exposure to toxins.

The bill is written in the same way as the Agent Orange Act of 1991. Rather than requiring veterans to prove exposure to toxins, the War Fighters Act lists diseases known to result from toxic exposure, including several cancers and respiratory illnesses, and requires the VA to presume they were service-connected.

Veterans are optimistic that something positive will come out of the legislation, possibly this year. Comedian Jon Stewart, who helped push through legislation and compensation packages for 9/11 first responders in 2019, is backing the War Fighters Act, and President Joe Biden has said he believes toxic exposure in Iraq killed his son, Beau.

If the bill succeeds, it will mark a bitter victory for some veterans, like retired Tech. Sgt. Douglas Wilson, another K2 veteran.

Wilson has been fighting for years to have the VA recognize that the brain cancer that forced the Air Force to medically retire him in 2013 was a service-connected illness. He can no longer work or drive, and rides an electric wheelchair along the side of the road to his physical therapy appointments. His family is surviving on his wife’s salary as a teacher.

His oncologist has said Wilson’s cancer is “unequivocally” tied to his service at K2, but the VA refuses to recognize the connection.

“They treat (us) like they did the Vietnam veterans,” Wilson said. ”They are trying to deny us until we die.”