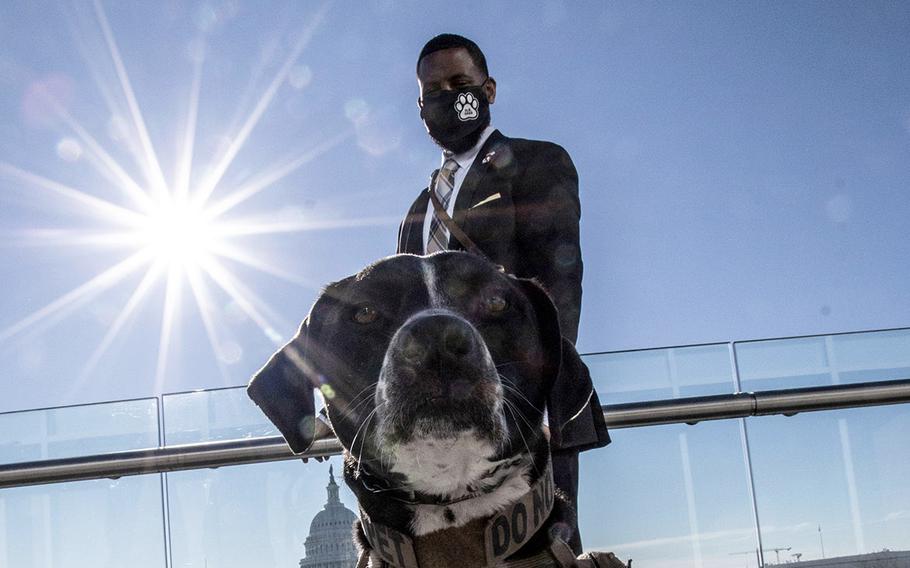 WASHINGTON — A group of House lawmakers are reigniting calls to expand access to service dogs for veterans suffering from post-traumatic stress disorder amid a growing number of studies that show the treatment works.

Rep. John Rutherford, R-Fla., on Wednesday reintroduced the Puppies Assisting Wounded Servicemembers Act that would create a $10 million grant program led by the Department of Veterans Affairs. The bill proposes qualified nonprofit organizations receive a stipend worth $25,000 per veteran to pair that person with a service dog.

Reps. Steve Stivers, R-Ohio, Michael Waltz, R-Fla., and Chris Pappas, D-N.H., joined Rutherford on Wednesday to voice support for the bill at an event to announce the legislation.

Waltz, who is a former Green Beret and a member of the House Armed Services Committee, said he personally suffered from PTSD and traumatic brain injury and has seen the benefits of service dogs.

“I’ve walked that walk and these dogs absolutely work. … We’re gonna get this bill passed,” he said.

When Rutherford reintroduced the PAWS Act in 2019, it drew bipartisan support in the House, but further action on it failed. The legislation was first introduced in 2016. 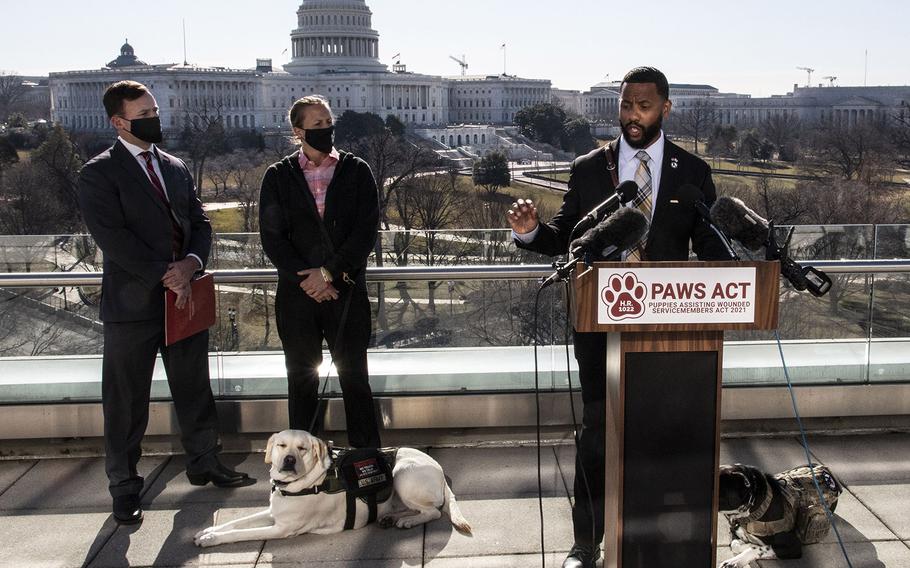 Buy Photo
Veteran David Crenshaw, with his service dog Doc at his side, speaks at a Capitol Hill news conference to promote House bill, H.R. 1022, the Puppies Assisting Wounded Servicemembers (PAWS) Act, March 3, 2021. Behind him, left to right, are K9s For Warriors CEO: Rory Diamond and veteran Becca Stephens and her service dog Bobbi. (Joe Gromelski/Stars and Stripes) 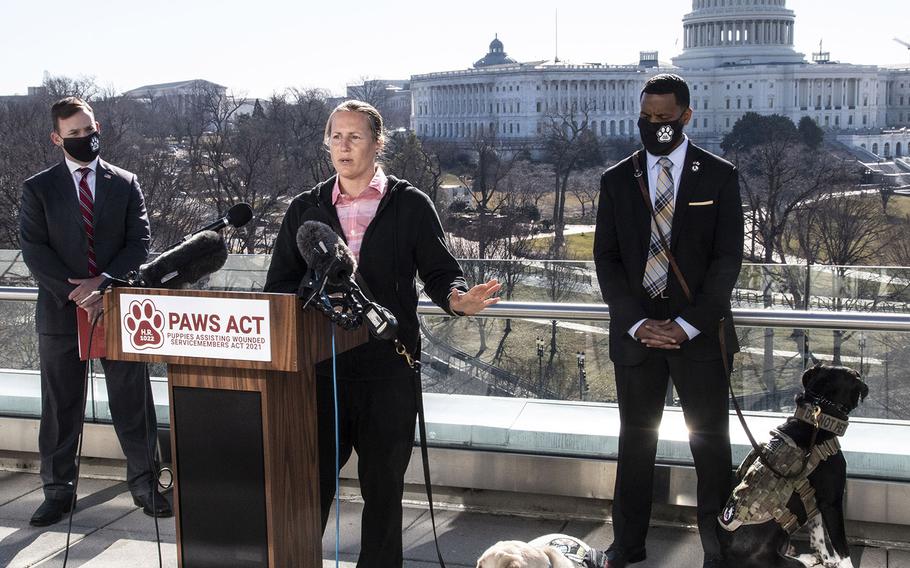 Buy Photo
Veteran Becca Stephens, with her service dog Bobbi at her side, speaks at a Capitol Hill news conference to promote House bill, H.R. 1022, the Puppies Assisting Wounded Servicemembers (PAWS) Act, March 3, 2021. Behind her are K9s For Warriors CEO: Rory Diamond and veteran David Crenshaw and his service dog Doc (Joe Gromelski/Stars and Stripes) 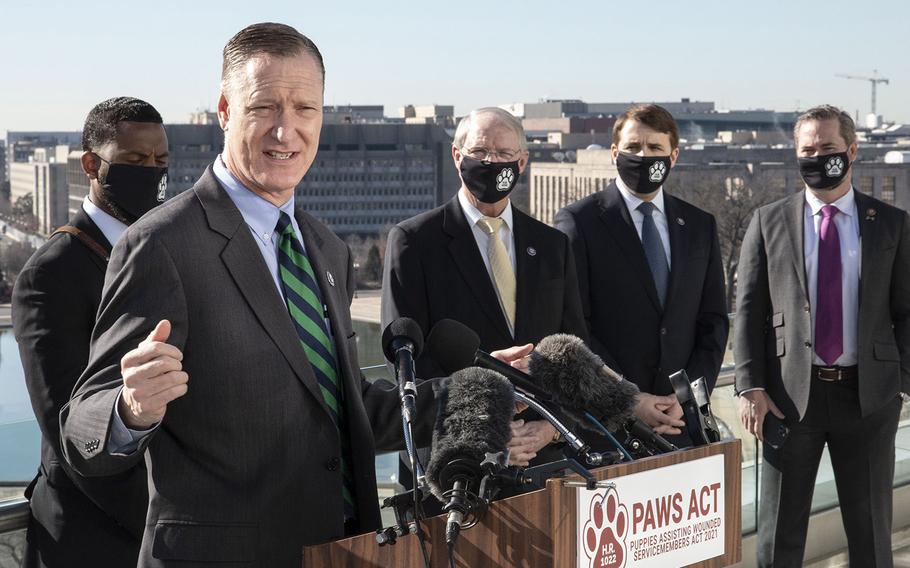 Rutherford said he’s hopeful that it will become law this time following the release of a draft study from the VA that has “proven scientifically, it works -- something that we have known all along.”

The VA has not publicly released the draft study and did not immediately respond to a request Wednesday asking for a copy of the report.

The department restarted a congressionally mandated study in 2015 on service dogs and PTSD. The study’s results were expected in summer 2020, but were never released.

The rate of suicide among veterans has steadily increased in recent years, according to a VA study released in 2020 that analyzed data from 2005-2018. Veterans accounted for 13.8% of all deaths by suicide in 2018, according to the report, despite increased public awareness of the issue.

Rory Diamond, the CEO of K9s For Warriors, one of the largest nonprofit organizations connecting service dogs with veterans, said at the event that lowering veteran suicide rates underscore the importance of the bill.

“We have seen the magic of what a service dog can do for a disabled veteran who’s suffering from truly extreme PTSD. We are on the front line of fighting veteran suicide... and we are beating the odds. That’s why this act is so important and why it must be passed,” he said.

Among the 660 veterans that K9s For Warriors has served, 72% of them have made a suicide attempt before they reach the group, Diamond said.

Between 20 and 22 veterans die by suicide each day, Stivers said.

The congressman, who introduced a similar bill this week, pointed to research from Kaiser Permanente that found veterans who work with service dogs show fewer symptoms of PTSD and depression, have a lower risk of substance abuse and improved overall mental health.

Stivers said there are two different bills, but “we are one, working together. One for all and all for one on dog veteran therapy.”

The VA has “finally released a draft study that recognizes what the science at Purdue and Kaiser Permanente and what K9s For Warriors recognizes every time they graduate a class: Service dogs make a huge difference for our veterans suffering from PTSD. They save their lives,” he said.

Funding that would be provided under the PAWS Act would benefit nonprofits such as K9s For Warriors that often train and connect service dogs to veterans with a mental illness with no charge.

Diamond said a service dog can play a variety of roles in a veteran’s life, more than basic needs such as constant companionship.

In the midst of a panic attack or another mental health crisis, if the person can focus on their dog and continues to pet the animal, symptoms such as cloudy vision, sweating, heightened heart rate and anxiety can start to fade, Diamond explained.

“If they do that enough times when those things happen, it stops happening… and that’s the genius. It’s just like an amazing bridge back out into the world,” he said.

The VA does not fully fund service dog programs now, according to K9s For Warriors. The VA also pushed back on efforts like the PAWS Act, citing a lack of research on the benefits of the treatment, according to a 2019 New York Times report.