Woudrichem: Not your typical stop 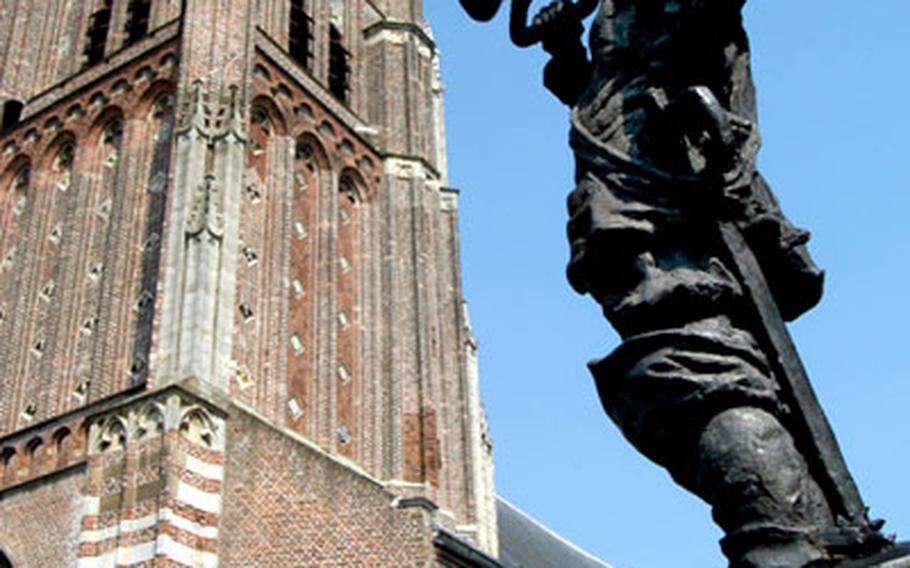 Woudrichem’s Martinus Church dates back to the 15th century. Its tower was once higher, but part of it was shot down during the Spanish occupation in 1574. Since then, the tower has been known locally as “the Mustard Pot.” (Michael Abrams / S&S)

Woudrichem’s Martinus Church dates back to the 15th century. Its tower was once higher, but part of it was shot down during the Spanish occupation in 1574. Since then, the tower has been known locally as “the Mustard Pot.” (Michael Abrams / S&S) 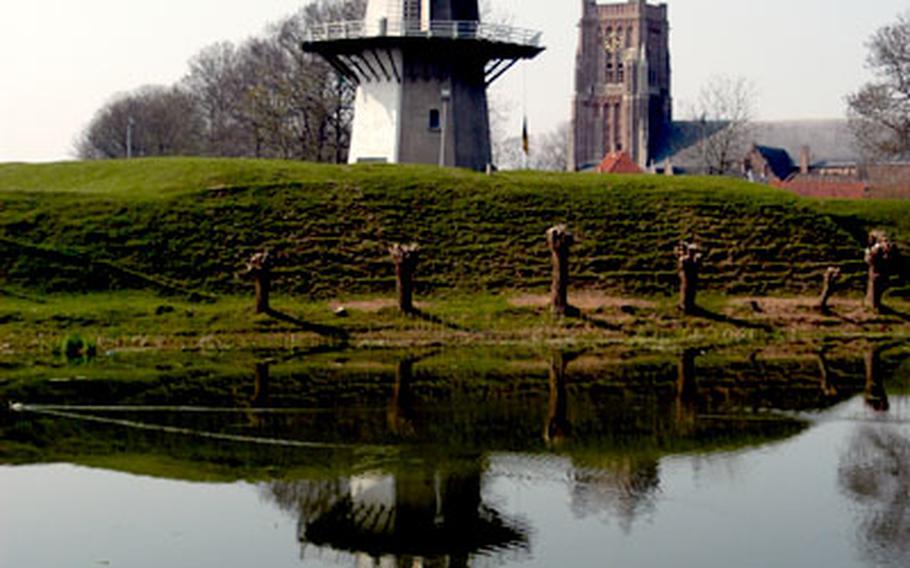 Woudrichem’s windmill and Martinus church are reflected in the moat on the south side of this Dutch medieval town. (Michael Abrams / S&S) 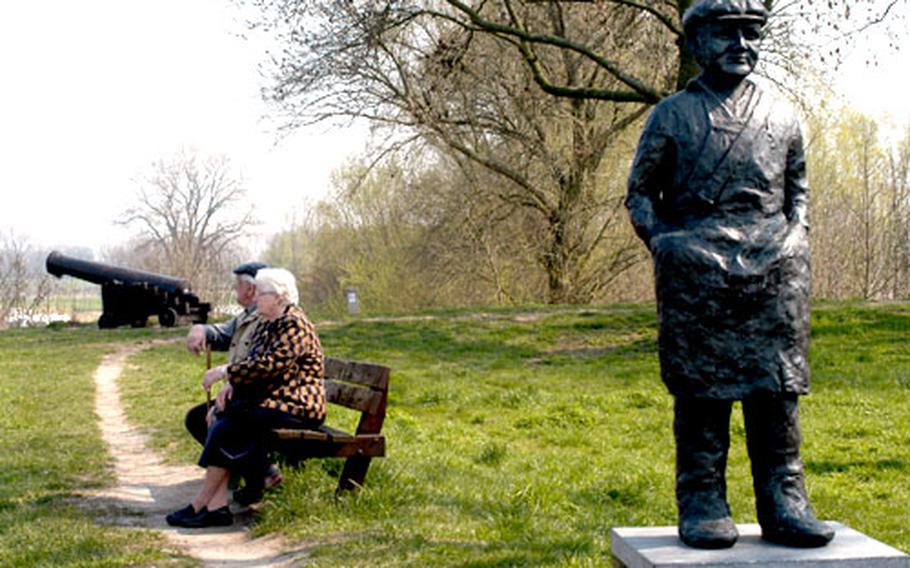 An elderly couple sit on a bench atop Woudrichem’s ramparts watching the ships ply the Waal river. In the foreground is a statue known as the Zalmvisser, or salmon fisher. Fishing was once a mainstay of the locals, but unfortunately there are no salmon left in Dutch rivers. In the background at far left is Loevestein Castle, across the Maas river from Woudrichem. (Michael Abrams / S&S) 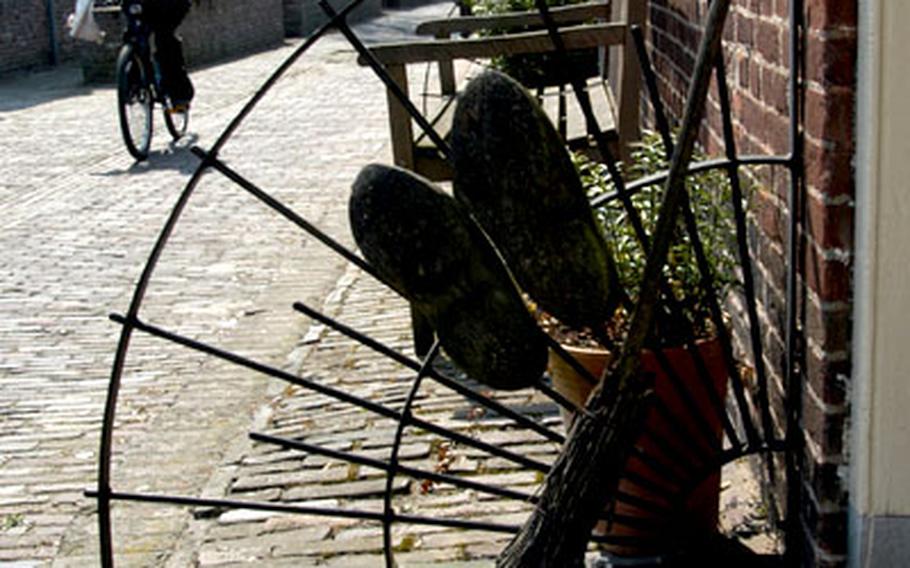 A pair of old wooden shoes and a broom decorate a doorway on one of Woudrichem’s typical cobblestone lanes. (Michael Abrams / S&S) 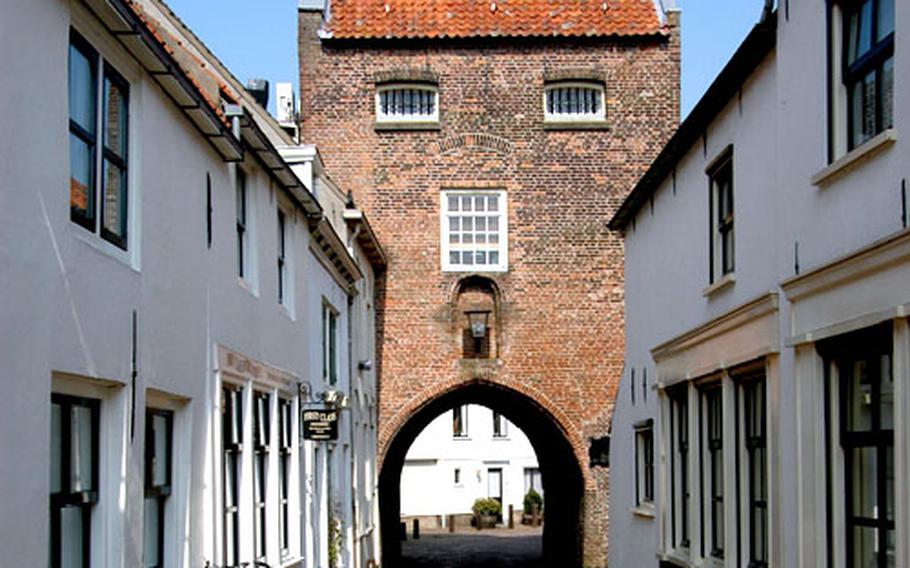 The Gevangenpoort, Woudrichem’s city gate that leads down to the town’s old port. (Michael Abrams / S&S)

It is not a place you&rsquo;ll find mentioned in guidebooks. It isn&rsquo;t on the A-list (or even the B-list) of the most exciting or sought-after locations in Europe.

But if you are heading to or from Amsterdam, The Hague, Rotterdam, or the Dutch North Sea coast, it is a good place to take a break from driving or to stop for lunch.

The place is Woudrichem, a tiny medieval walled town located where the rivers Maas and Waal converge and become the Merwede.

It is an old town. How old is not certain. Woudrichem &mdash; then known as Walrichsheim &mdash; was first mentioned in 866. It got today&rsquo;s name in 1290.

Woudrichem is one of 11 official Dutch Fortress Towns that once protected the countryside from invaders, like the Spanish in the 16th and 17th centuries and the French in the latter half of the 17th century.

Along with Gorinchem across the Waal and Loevestein Castle across the Maas, Woudrichem made up what was known as the Fortified Triangle.

Thick earthen ramparts still surround the town and its gates are guarded by a pair of vintage cannons. Without the cars parked on the streets, it would be hard to tell which century it was. The old brick houses, on cobblestone lanes, gives Woudrichem that medieval feel.

Sight-wise there is the 15th-century Martinus Church with its square tower. It was once much higher but the upper part was destroyed during the Spanish occupation in 1574. The locals refer to it as the Mustard Pot.

On the other end of town is the Gevangenpoort, a massive gate that leads down to the town&rsquo;s historic port. Between the two is the Oude Raedthuys, the old city hall, now a popular restaurant.

You can walk on top of the bastion almost all the way around the town.

On its southeast corner stands the town&rsquo;s reconstructed octagon windmill. On the northeast wall there is a good view of the boats plying the Waal and Maas. Here also stands a small statue of a man called the Zalmvisser, commemorating the salmon fishers of Woudrichem.

Where: Woudrichem is in southwestern Holland where the rivers Waal and Mass converge. It is about 10 miles west of Dutch superhighway A27 (E311), which runs south to north between Breda and Utrecht. Leave A27 at Sleeuwijk, exit 23a, and follow the signs to Woudrichem.

When to visit: Anytime, but the stroll around town is best when the weather is good, so between May and September would be best.

Additional info: Loevenstein Castle, across the Maas is also worth a visit. From May through October, a small ferry runs between Woudrichem and Loevenstein. The castle is open May to September, 10 a.m. to 5 p.m. Tuesday through Friday, and 1-5 p.m. Saturday, Sunday and Monday. From October to April, it is open 1-5 p.m. Saturday, Sunday and Wednesday, but you&rsquo;ll have to drive there.

For a Dutch treat, visit De Pannekoekenbakker, a pancake restaurant on a ship docked on the Maas (Shapendam 7). You can choose from 230 different versions of the Dutch specialty.

Another site with information on the city, but all in Dutch, is: www.hav.nl/zoek/woudrich1.html.