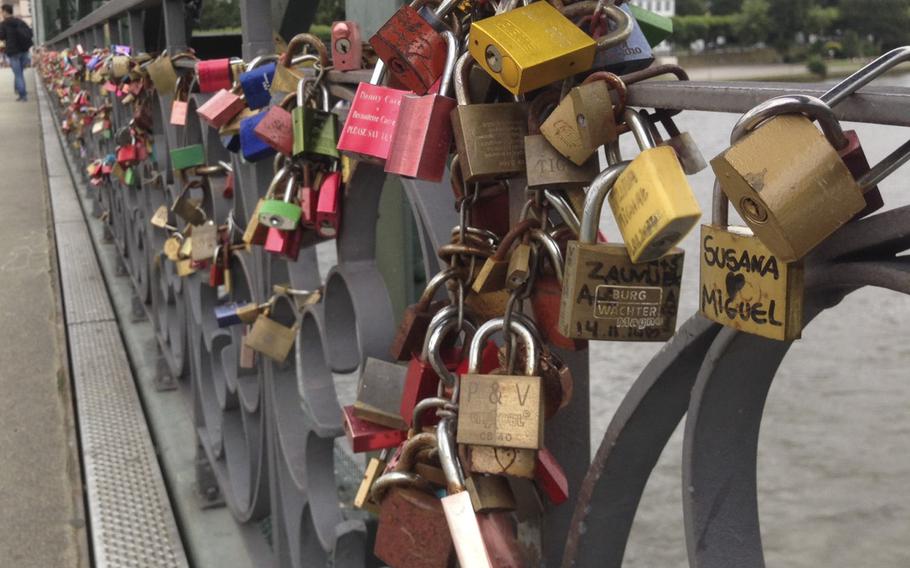 Buy Photo
Frankfurt, Germany's Eiserner Steg is a pedestrian bridge over the Main River, constructed in 1868. In recent years couples have taken to proving their love by writing or etching their names onto locks, attaching them to the bridge and throwing the key into the river. Eiserner Steg one of the stops on the Frankfurt on Foot guided tour, which covers much of the city center over three and a half hours. (Dan Stoutamire/Stars and Stripes)

Buy Photo
Frankfurt, Germany's Eiserner Steg is a pedestrian bridge over the Main River, constructed in 1868. In recent years couples have taken to proving their love by writing or etching their names onto locks, attaching them to the bridge and throwing the key into the river. Eiserner Steg one of the stops on the Frankfurt on Foot guided tour, which covers much of the city center over three and a half hours. (Dan Stoutamire/Stars and Stripes) 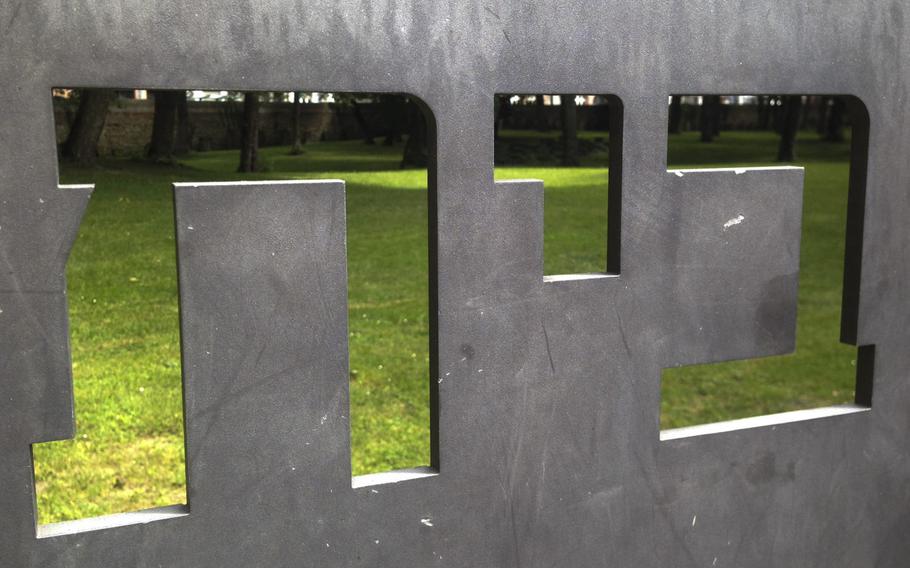 Buy Photo
Modern doors with Hebrew script guard the medieval Jewish cemetery in Frankfurt, Germany. The walls of the cemetery, which was largely destroyed during Nazi rule, are covered with small bearing the names of the more than 12,000 Jewish citizens of Frankfurt who were killed in concentration and work camps during World War II. (Dan Stoutamire/Stars and Stripes) 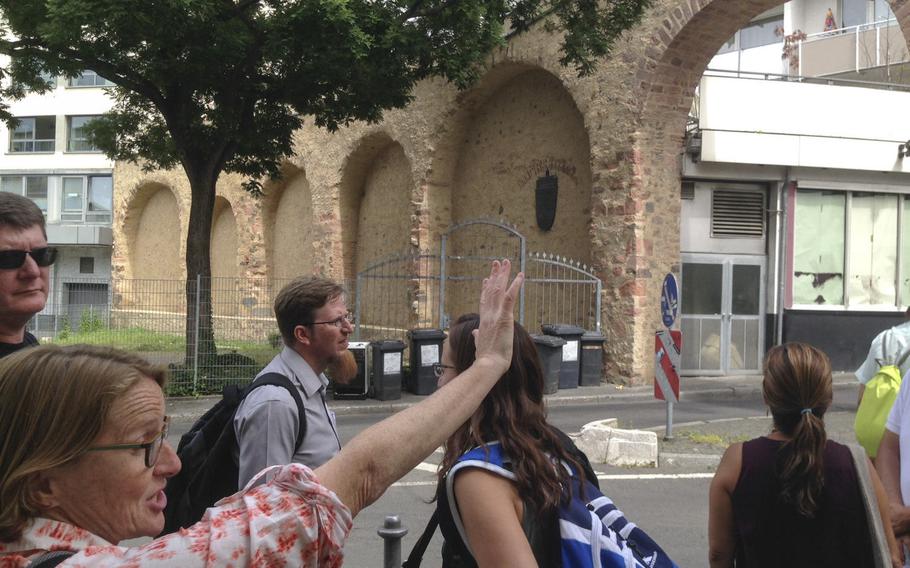 Buy Photo
Frankfurt on Foot tour guide Nancy Shawn, left, points out features of a medieval wall that once surrounded the Jewish ghetto of Frankfurt, Germany. The tour, which lasts roughly four hours, covers hundreds of years of the city's history. (Dan Stoutamire/Stars and Stripes) 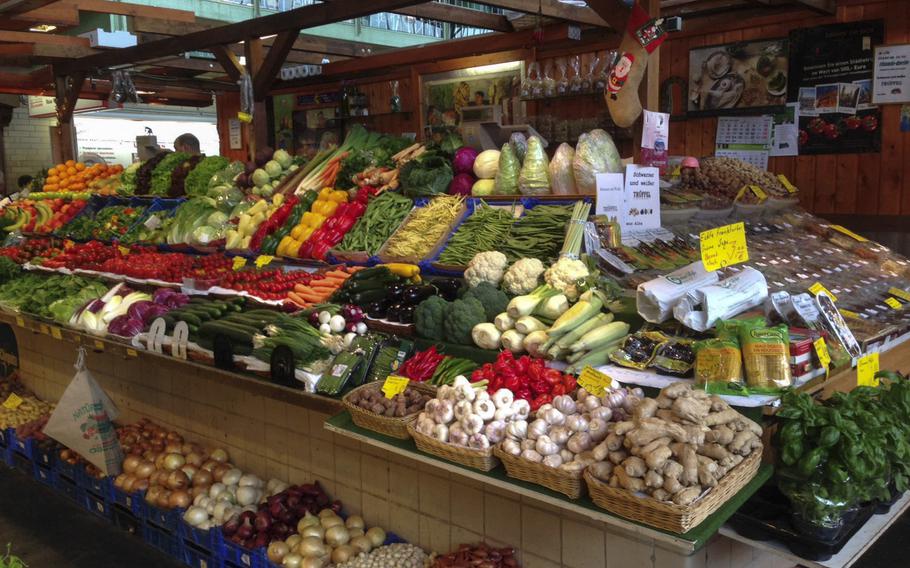 Buy Photo
Kleinmarkthalle, or the little market hall, in the center of Frankfurt, Germany, sells fruits and vegetables. The hall is one of the stops on the Frankfurt on Foot walking tour, which takes about four hours and runs 365 days a year. (Dan Stoutamire/Stars and Stripes) 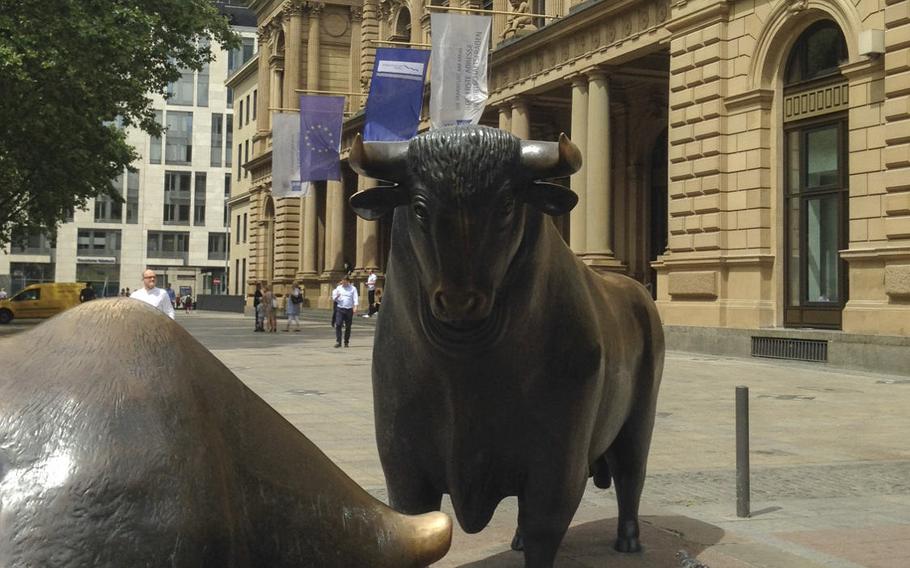 Buy Photo
Statues of a bull and bear outside the Frankfurt Stock Exchange. Frankfurt, Germany, has a long history as a financial capital because of its central location in Europe. (Dan Stoutamire/Stars and Stripes)

When you visit a new city, especially a large one, taking a hop-on, hop-off bus tour can be a good way to get a quick overview. But walking a city can give you a different perspective and greater access to the tucked-away treasures so common in old European cities.

That’s the idea behind the U.S. veteran-run Frankfurt on Foot, a daily walking tour of the financial capital of Germany — and Europe. Army veterans David and Jo Ator have lived in the city for decades and know it like the back of their hands. The excursion, featured by the BBC and Rick Steves, is currently the No. 1 tour of Frankfurt on TripAdvisor.

“I like the history here,” said Jo, who plans to run the tour until she and her husband “can’t walk anymore.”

“All the different eras — the Romans, the Holy Roman Empire — to think about everything that’s happened, it’s pretty incredible.”

Over the course of three to four hours, the Ators or one of their native-English-speaking guides take you through the city’s thousand-year history, starting with the square around the 15th-century town hall, or Roemerplatz, and ending at St. Paul’s Church, the meeting place of Germany’s first legislative body in 1849.

Along the way, the tour stops at the Eiserner Steg, a pedestrian bridge over the Main River with a great view of the riverbank; the Hauptwache, or former main police station (now a coffee shop); the Frankfurt Stock Exchange; Eschenheimer Turm — the only surviving part of the city’s medieval fortifications, spared by Napoleon because of its beauty; and many other sites, including the modest Old St. Nicholas Church, erected in the 13th century.

Another hidden gem not found in every guidebook of the city is the Carmelite Cloisters, which feature massive wall paintings from the 16th century, many of which have been restored.

“It’s a little bit off the beaten track; not a lot of tourists go there or know about it,” said tour guide Nancy Shawn, a Seattle native who moved to Frankfurt about two years ago. July 11 was her final day as a guide before she headed back to the United States. “It’s really quiet, and it has a beautiful garden that’s always changing with the seasons.”

Several of the tour’s stops deal with the history of Frankfurt’s Jewish citizens, including the medieval Jewish cemetery, the Holocaust memorial wall and a surviving section of the ghetto wall.

In addition to the daily walking tour, Frankfurt on Foot offers tours with themes, such as a World War II tour of Frankfurt and a visit to former American military installations around the city. These can be arranged in advance on the website.

The tour leaves from the corner of Braubachstrasse 40 and Neue Kraeme, in front of the Binding Schirn Cafe. It’s about 50 feet from the tourist information booth at the city hall. By public transportation: Take streetcar Line 11 or 12 to the Roemer/Paulskirche stop. Via the subway, from Frankfurt’s main train station, take the U4 to Dom/Roemer. From the airport, get off the train at Hauptwache station and walk to the Roemer. Driving: From Wiesbaden, head east on A66, then take Eschersheimer Landstrasse, Bleichstrasse and Konrad-Adenauer-Strasse to Domstrasse. The closest parking garage is Dom/Roemer, located at Domstrasse 1.

Tour begins daily (rain or shine, all holidays) at 10:30 and takes between three and four hours.