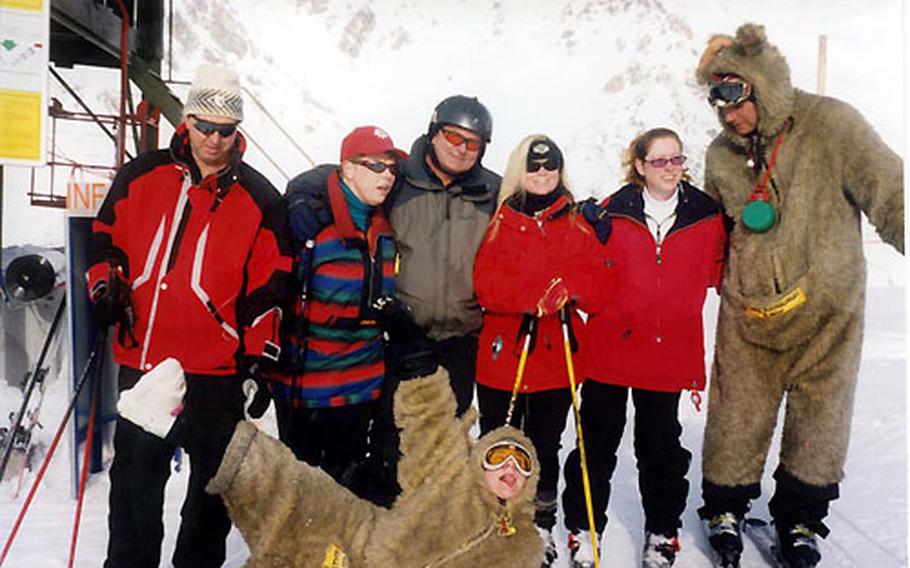 Members of Stuttgart’s Patch Ski club pose for a photo with he “kangaroos.” The costumed furry fellows roam the slopes to promote the Krazy Kangaruh restaurant and bar. They have been known to offer cold skiers a shot of warm-up schnapps. (Leah Larkin / Special to S&S)

Members of Stuttgart’s Patch Ski club pose for a photo with he “kangaroos.” The costumed furry fellows roam the slopes to promote the Krazy Kangaruh restaurant and bar. They have been known to offer cold skiers a shot of warm-up schnapps. (Leah Larkin / Special to S&S) 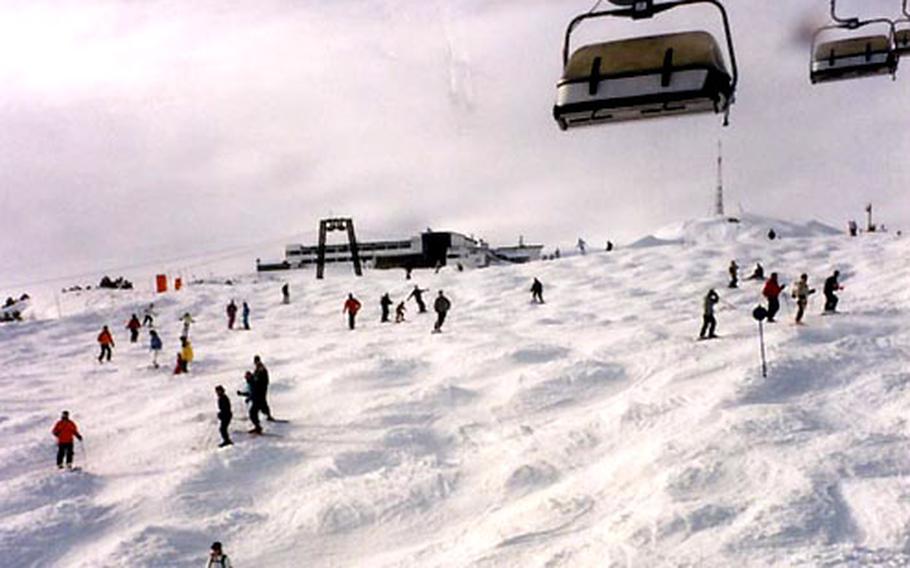 St. Anton am Arlberg, Austria, has plenty of intermediate cruising terrain, but it’s also well-known for its challenging off-piste powder runs. St. Anton’s ski facilities are among the largest in Austria. (Leah Larkin / Special to S&S) 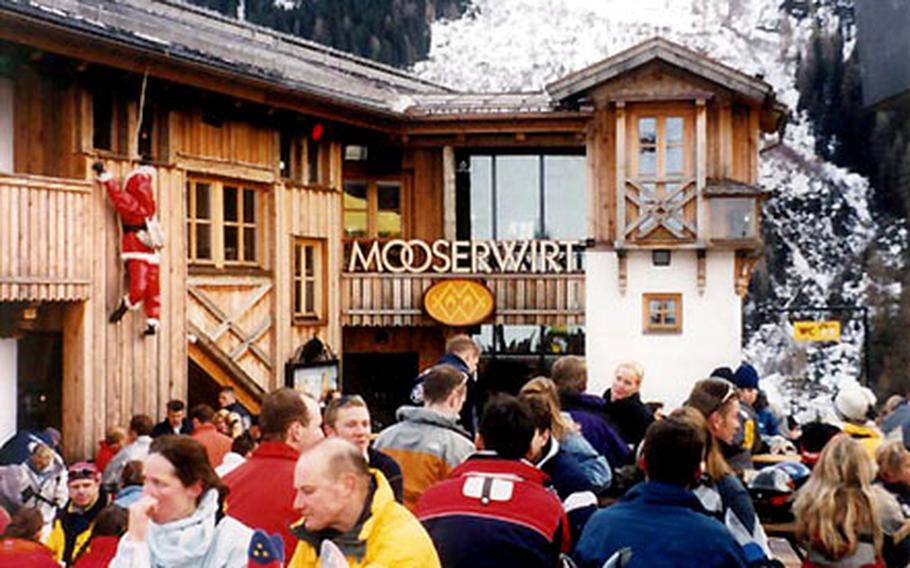 The Mooserwirt is the “in” place for lunch and apres-ski at St. Anton in Austria. Things really swing in the late afternoon when music blasts and the beer and schnapps flow. (Leah Larkin / Special to S&S)

It has been called the hometown of skiing. St. Anton am Arlberg, Austria, is one of those legendary European ski resorts that has it all: challenging off-piste skiing, thigh-burning black runs, miles of intermediate cruising runs, rocking apr&egrave;s-ski action, all grouped with old-world charm.

The only thing it may lack is beginner terrain. Although its ski map features lots of runs colored blue, meaning easy, most rank in the intermediate category.

The man who put St. Anton on the big ski map is Hannes Schneider, the son of a local cheesemaker who decided to teach others how to snowplow and stem-turn their way down the slopes.

That was back in 1907. He developed better ways of turning skis, and his method became known as the Arlberg technique. For years, it was the international ski school standard, and St. Anton became Europe&rsquo;s most celebrated winter spa for learning this new sport. These days, because of shorter parabolic skis, the Schneider style is pass&eacute;.

However, there&rsquo;s nothing pass&eacute; about St. Anton. It snuggles on the eastern rampart of the Arlberg, a mighty mountain range that separates Austria&rsquo;s western tip from the rest of the country. With elevations rising from 5,000 to 9,000 feet, its summits are a veritable snow trap making for supreme ski terrain.

St. Anton&rsquo;s ski facilities are among the largest in Austria. Its slopes are connected with those of the neighboring idyllic Arlberg villages of St. Christoph and Stuben by lifts. Ski towns Lech and Zurs are a short drive or bus ride away. The entire Arlberg region encompasses 83 lifts and 275 miles of trails &mdash; and there&rsquo;s almost as much off-piste territory.

Skiers from Stuttgart&rsquo;s Patch Ski Club have been flocking to St. Anton during the Christmas holiday season for the past four years. This past season, there were 61 in the group that went for the week. Despite rainy weather the first few days, there was plenty of snow, and even more when the rain turned to white flakes.

Mark Oslebo, who organizes the trip for the club, says &ldquo;the best skiing is off piste. It&rsquo;s great if the snow is good.&rdquo;

One of the runs that good skiers like to boast they have conquered is the Schindler Kar, a nongroomed run from the Valluga summit. Another thriller is an off-piste adventure best done with a guide. Rendl, a smaller St. Anton ski area across the road from the main hub of slopes, offers mainly easy runs on its front side. But the long, steep off-piste route off the back is for experts only.

To avoid weekend lift lines, some of our group headed to Rendl and reported excellent snow conditions and no waiting on the front slopes.

I found plenty to ski on slopes descending from the Gampen and Galzig lifts. There&rsquo;s a cable car to the Valluga summit, but you can also ride a chair, the Schindlergrat, almost to the top. From there, sail down trail 14 to the Ulmer Hutte, then continue down number 17 to Alpe Rauz below St. Christoph.

I skied this once with a group. It was so outstanding, Martin Bixby wanted to do it again. For the others, once was enough. I agreed with Bixby, so I followed him at top speed. We made few stops, just soared down this wonderful run. This was skiing!

Bixby had wanted to continue on Trail 1 and ski the Albona area across the road above Stuben. He raved about the intermediate run there. However, the clouds had rolled in and visibility was nil, so we scratched that plan and headed on to the Krazy Kangaruh, one of the popular watering holes, to meet the others.

Mogul seekers can find some fun terrain at St. Anton. I liked the No. 2 black run where the moguls, at least when we were there, were not giants.

&ldquo;You pass lots of nice huts, good places to stop,&rdquo; he said of the journey that takes about a half day.

Many from the Patch Ski Club skied neighboring Lech and/or Z&uuml;rs at least one day during the trip. Lech is the chic resort in the Arlberg where royalty have been known to ski. It is noted for wide open, primarily easy slopes. Both Lech and Z&uuml;rs are about a half-hour drive from St. Anton. There is a ski bus offering shuttle service among the towns.

For years, the place to wind down the ski day was the Krazy Kangaruh, a rollicking bar run by Australians. It&rsquo;s nestled on the slopes just several hundred feet above the town and a short detour from the main ski run.

These days it gets stiff competition from the Mooserwirt, a nearby, but newer, pub of the same genre where skiers gather to quaff pints of beer and shots of schnapps, then dance in their ski boots on the picnic tables to loud sounds played by a DJ.

Oslebo calls the Mooserwirt &ldquo;one of the top apr&egrave;s-ski places in Europe. It&rsquo;s where everyone goes, where the most action is. The Krazy Kangaruh is dying out.&rdquo;

Stuttgart skier Carmen Oeltjen agrees that &ldquo;the Mooserwirt is happening &hellip; yet we had a great time at the Krazy Kangaruh.&rdquo;

Both places are popular at lunch featuring awesome burgers and fries, spare ribs and chili, as well as some local specialties such as Kasesp&auml;tzle (cheese noodles) and Tyroler Gr&ouml;stel (fried potatoes and minced bacon usually served in a frying pan with a fried egg on top).

You&rsquo;ll hear plenty of English on the St. Anton slopes. In addition to the Australians, the resort is popular with the Swedes, who speak English in international circles. A young Swede who drove the shuttle van from our hotel to the slopes complained that there were too many in the area from both his native country and Australia. He had no opportunity to learn German, he lamented.

Like many, he raved about Hotel Gridlon, where the group stayed, &ldquo;the most people-oriented hotel I&rsquo;ve ever been to.&rdquo;

He recently called the hotel to make reservations for the President&rsquo;s Day weekend. They asked how Junior was.

Leah Larkin, a member of the Society of American Travel Writers, is a freelance journalist living near Stuttgart, Germany.

St. Anton is about an hour west of Innsbruck at the foot of the Arlberg Pass. From Stuttgart, it&rsquo;s a 3&frac12;- to 4-hour drive.

For its St. Anton trip, the Patch Ski Club stays at the Hotel Gridlon in the nearby village of Pettneu, about 10 minutes by car from the slopes. The four-star hotel features a wellness center with swimming pool, fitness room, sauna, steam rooms, ample breakfast buffet, gourmet meals and van transportation to and from the slopes.

St. Anton offers a variety of accommodations from simple bed-and-breakfast pensions to luxury hotels. For more information on the area, visit www.stantonamarlberg.com and www.skiarlberg.at