Seoul: See city from above A rock tower along one of the paths in the lower part of Namsan park. The sign reads, "Don&#39;t touch a tower! Let&#39;s cherish and love nature!" (Joseph Giordono / S&S)

A rock tower along one of the paths in the lower part of Namsan park. The sign reads, "Don&#39;t touch a tower! Let&#39;s cherish and love nature!" (Joseph Giordono / S&S) The old and the new ... Seoul Tower rises above a historic pavilion crowned with watching monkeys. (Joseph Giordono / S&S) 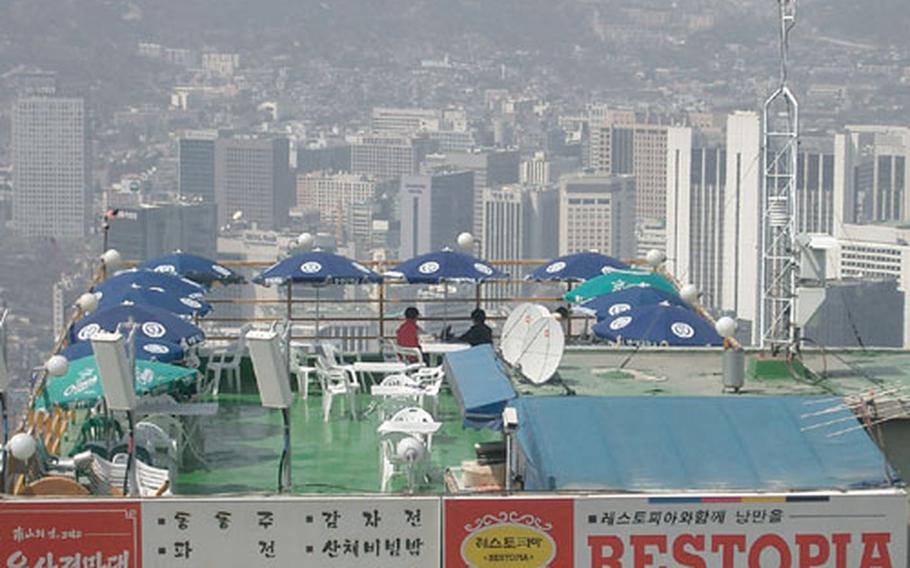 At the top of Namsan, just above the cable car house, you can stop and enjoy a snack and the view of downtown Seoul. (Joseph Giordono / S&S) A man stares at the carp pond in Namsan Park. Winding paths in the lower part of the park have a variety of flora and fauna. (Joseph Giordono / S&S) 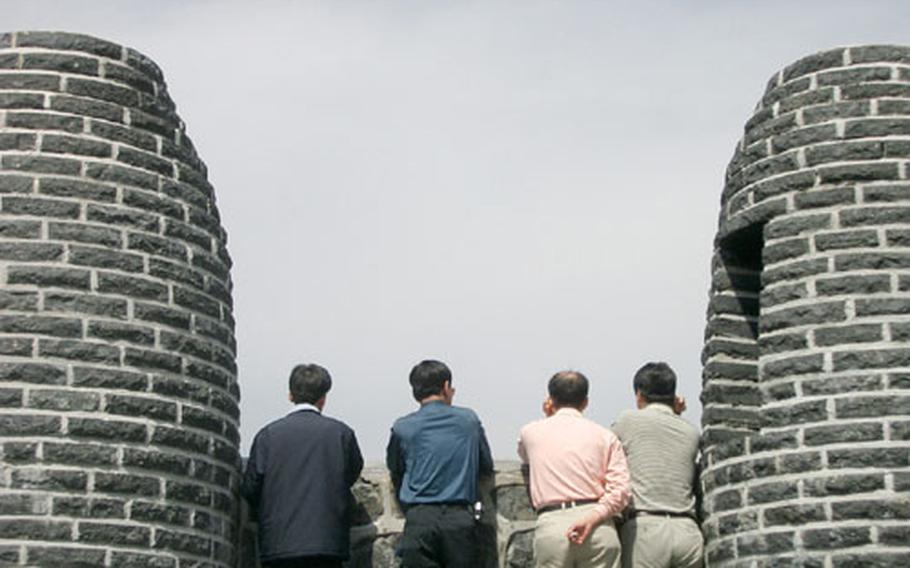 A group of men pause and check out the view from a series of huge brick ovens once used as signal fires to relay emergencies or border attacks from the outlands back to the capital, Seoul. (Joseph Giordono / S&S)

SEOUL &mdash; It sits not far away, looming over Yongsan Garrison as a pointed reminder that during six months in-country, the only thing you&rsquo;ve seen in South Korea is the inside of an Itaewon bar.

It taunts you in the fall when the trees turn brilliant colors, in the winter with snow-capped hills and in spring, when everything starts to bloom. So one weekend you shake off your hangover and finally decide: I&rsquo;m going to Namsan Park.

And you love it.

Namsan is the highest point in Seoul, crowned with the ever-visible Seoul Tower (acclaimed as the &ldquo;third-largest tower in the world,&rdquo; depending on how you define &ldquo;tower&rdquo;). On foot from Yongsan Garrison, you can be inside the park in about 15 minutes. Once there, it&rsquo;s up to you how long you want to stay.

Pack a lunch, and make a day out of it, lounging with friends on long fields of grass. Or, bike or run through the park, winding your way up the long, gradual incline to Seoul Tower.

Along the way, you&rsquo;ll likely see brigades of white-gloved, track-suited old ladies under giant visors, chugging their way to the top of the hill. You&rsquo;ll also pass a host of people crouching and staring inexplicably at pieces of the ground. One man, who alternated between staring into a fish pond and staring at a patch of grass, said he was contemplating nature.

When you get to the top, there&rsquo;s plenty of chances to contemplate an ice cream cone or a hamburger. The top of Namsan is nothing like the gardens below. Rows of stores, restaurants and souvenir stands line the pavilion under the Seoul Tower (usually cited as reaching 1,600 feet above sea level&hellip; which is technically true, though the first 800 feet of that is mountain).

Nearby, you can catch a ride on the Namsan cable car. Offering spectacular, if usually hazy, views of downtown Seoul, the cable car runs every 30 minutes; a round trip up and down the mountain will run about $2 per person. At the top of the cable car loop is a restaurant which offers similarly striking views from its rooftop seating area.

Historically, Koreans used to call the place Mount Ingyoung. When the first Chosun Dynasty king moved the capital to Seoul in 1394, the name was changed to Namsan &mdash; meaning, literally &ldquo;south mountain.&rdquo;

A beautiful but bittersweet reminder of the colonial period are the dozens of cherry trees planted by the Japanese in the early 20th century. According to a history of the park on the Seoul city Web site, many North Korean refugees made their homes in the Namsan area during and after the Korean War. The area used to be called &ldquo;haebangchon,&rdquo; or freedom town.

Most of the former shrines have since been developed into parts of a large botanical garden that highlights different species from around the region. From 1991 to 1998, city officials conducted a &ldquo;Namsan Renaissance&rdquo; project, tearing down buildings and making way for more open space.

The highlight of that program came in 1994, the city Web site says. On Nov. 30, a two-building apartment complex was imploded with dynamite, making it the first intentionally-destroyed building in Seoul since the war. The spectacle drew a large crowd, the city Web site said.

Fortunately, nothing is likely to be blown up in the park these days.

Walk up the hill to the main park entrance across from the Hyatt Hotel. It&rsquo;s just around 15 minutes from Yongsan Garrison.