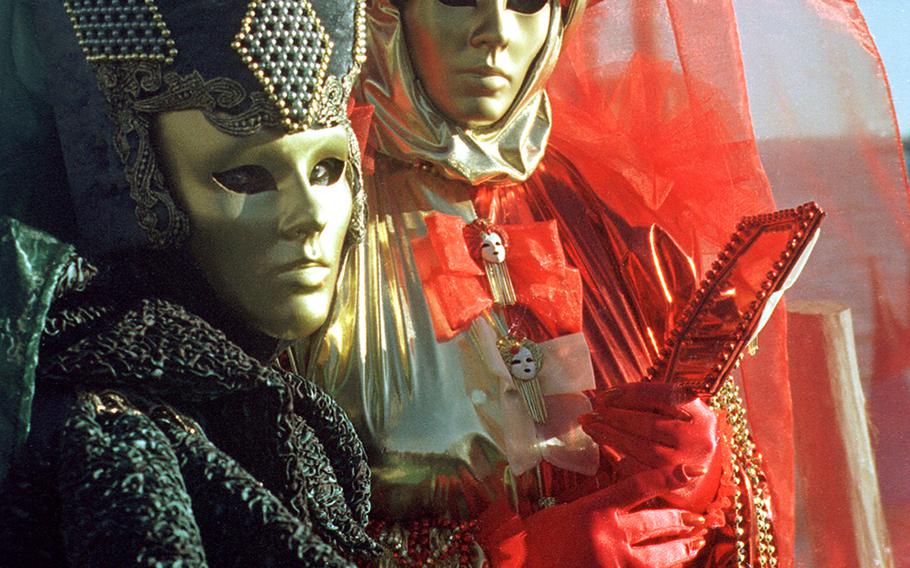 Revelers in elaborate costumes pose for photographers willingly during Carnevale in Venice. Being seen but not known is what the pre-Lenten celebration is all about. (Michael Abrams/Stars and Stripes)

Revelers in elaborate costumes pose for photographers willingly during Carnevale in Venice. Being seen but not known is what the pre-Lenten celebration is all about. (Michael Abrams/Stars and Stripes) 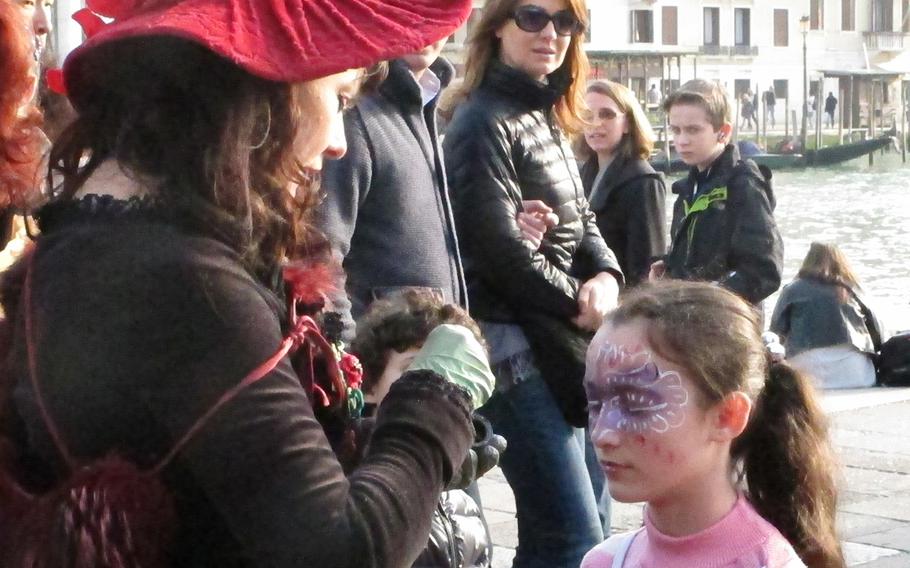 A costumed woman paints the face of a little girl at Carnevale in Venice on Sunday, Feb. 16, 2014. (Nancy Montgomery/Stars and Stripes) 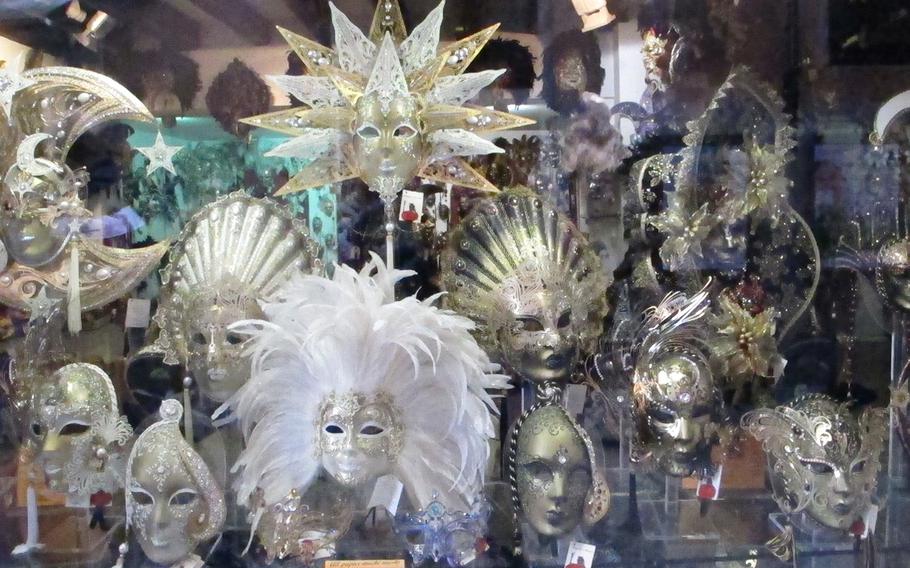 Venice is said to have more mask shops than grocery and butcher shops. During Carnevale, people actually wear some of these elaborate and glitzy masks. (Nancy Montgomery/Stars and Stripes) 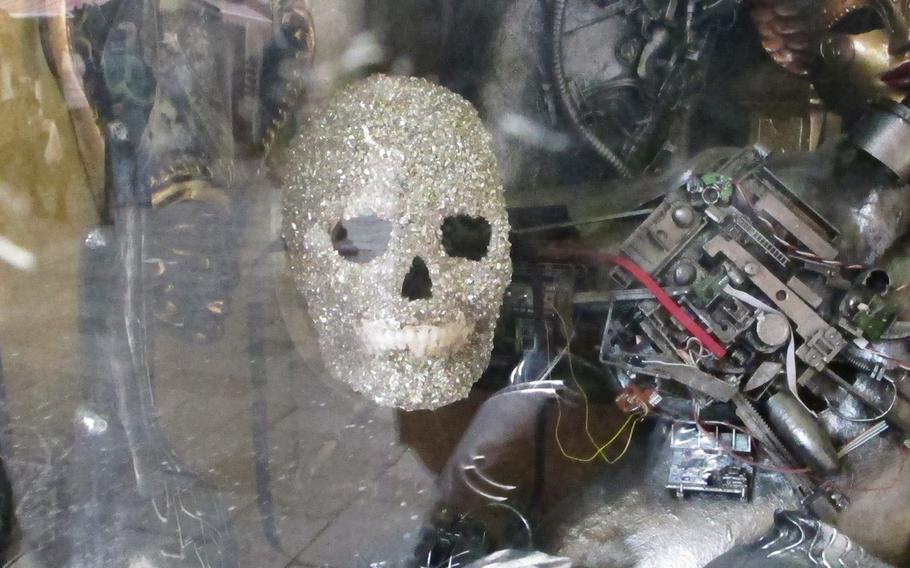 A skull mask is not exactly traditional for the Venice Carnevale, but it is for sale. (Nancy Montgomery/Stars and Stripes) 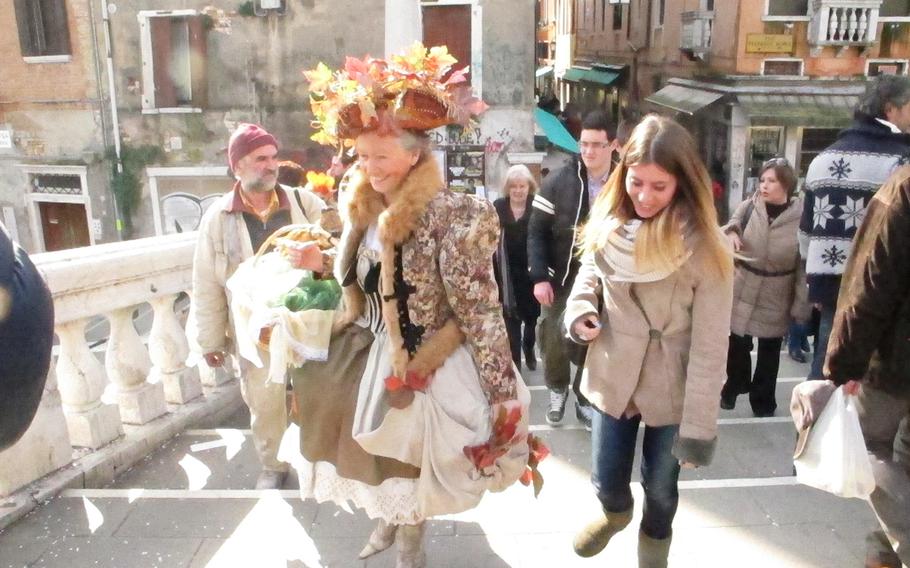 Carnevale in Venice is like a Halloween that lasts two weeks. (Nancy Montgomery/Stars and Stripes) 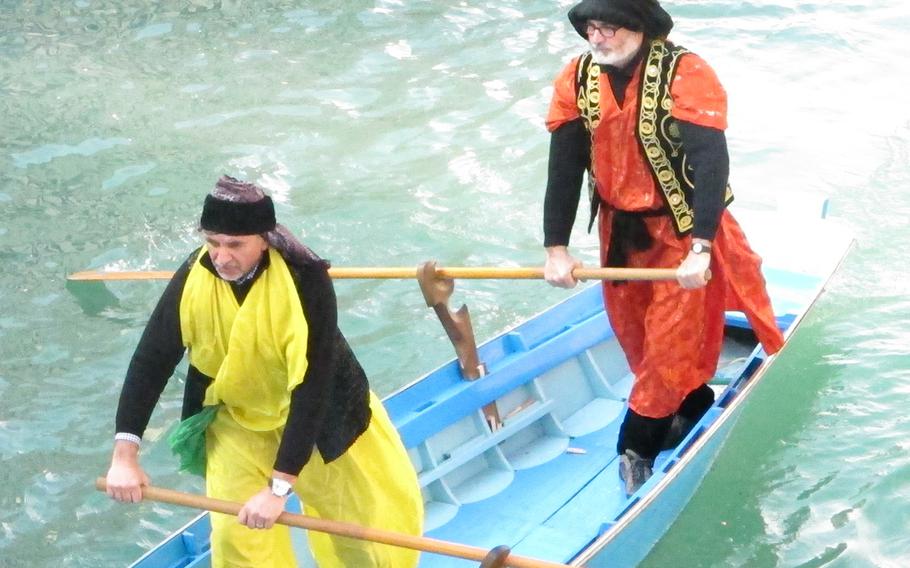 Participants in a Venice Carnevale boat parade row away after parade's end on Feb. 16, 2014. (Nancy Montgomery/Stars and Stripes)

On a Sunday morning the second day of Carnevale in Venice, the full vaporetto was as quiet as a church. The few passengers who spoke at all whispered unheard over the waterbus’ motor as we plied the unusually serene canal. We penitents were on our way, as directed by the woman selling vaporetto tickets, to St. Mark’s Square to watch a boat parade.

But we were going the wrong way.

After a 9-euro ($12.60) cappuccino and a 40-minute wait spent scanning the canal for boats, I learned that the parade, by the Coordinamento Associazioni Remiere di Voga alla Veneta, was to sail elsewhere, in the Cannaregio district, wherever that was.

I boarded another vaporetto and headed back the same way I’d come. By the time I arrived, the parade was over.

These things happen when traveling abroad, don’t you find?

I consoled myself with the thought that I’d also missed the Zombie Walk on Saturday — the photos online are quite frightening — and that there were plenty more events before Venice’s annual pre-Lenten festival full of concerts, contests, circuses, exhibitions parades, dinners and balls ends on March 4 that I might actually locate. Because most of them are in St. Mark’s Square.

And really, any day in Venice is a carnival.

Right now, though, it’s even trippier than usual. Throngs of tourists from all over stroll about as usual, looking in shops, gazing at architecture, eating pasta with squid ink, but they do it wearing masks and costumes.

There’s quite the reason for this, according to the Carnevale English website: “… to rediscover, through their costumes and through the masked city, the importance of fantasy, both popular and cultured, esoteric and didactic, and its relationship with humankind and the environment. A gateway between the East and the West, where myths — and fears — of overseas monstrous and surprising creatures were translated into tales, paintings, decorations, to be exported to Europe along the canals and the roads scoured by merchants.”

According to the British newspaper The Telegraph, “St. Mark’s Square is the fulcrum of carnival activities, and that’s where you’ll find the most extraordinary costumes — many hoping for a chance in the best costume.”

Best costumes and masks will be judged twice daily on stage at St. Mark’s Square; the best of the best takes place on March 2.

This year, key carnival events will also take place inside the Arsenale, Venice’s magnificent historic shipyard, with waterborne pageants, re-enactments, street artists and bands. Much of the entertainment is free. The balls and parties, on the other hand, can cost hundreds or thousands of euros. Considered the top of the heap is the annual Gran Ballo della Cavalchina, an extravaganza inside La Fenice opera house next month.

For some, the highlight of the entire event is the Volo dell’Angelo, or “Flight of the Angel.” That’s when, on Feb. 23, a beauty pageant winner will ride a zip wire from the campanile in St Mark’s Square.