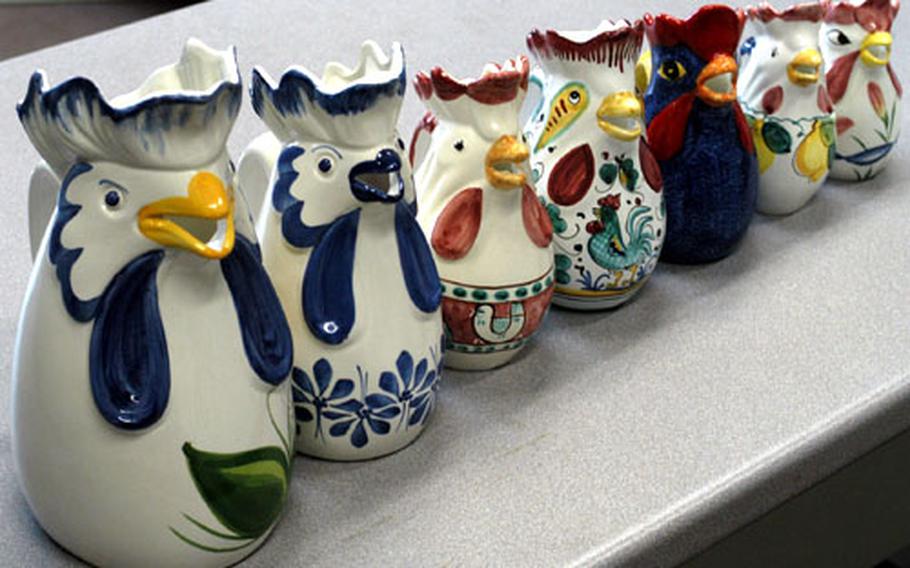 Chicken pitchers from Italy come in all sizes, colors and designs. The pitchers date back hundreds of years and are given to friends and family members to protect them from trespassers and danger. (Michael Abrams / S&S)

Chicken pitchers from Italy come in all sizes, colors and designs. The pitchers date back hundreds of years and are given to friends and family members to protect them from trespassers and danger. (Michael Abrams / S&S) 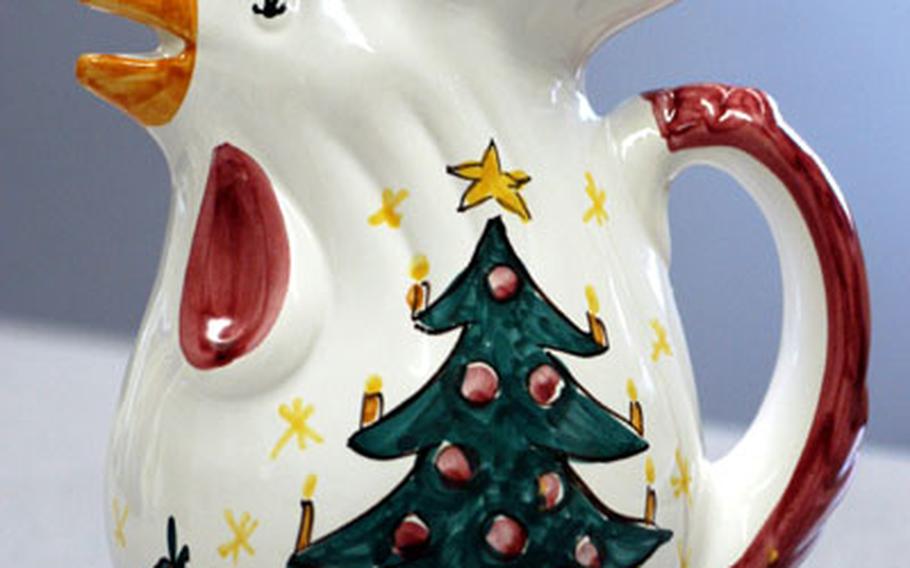 The colors and designs of chicken pitchers vary. This Christmas pitcher, for instance, provides a change from the ubiquitous flower designs. Add some holly or greenery and you’ve got a holiday centerpiece. (Michael Abrams / S&S)

Scratch beneath the surface and you&#8217;ll find that chicken pitchers roosted in Italian homes centuries before they strutted their way into the rest of the world.

Today, some Americans living in Europe &#8212; and especially in Italy &#8212; amass such large collections of them that they could fill a henhouse.

The pitchers are produced both by hand and by factory, with very little difference in cost. Ceramic producers in Vietri sul Mare in the south of Italy (near Naples) and in Nove in the north (near Aviano Air base) turn out the majority of the pitchers.

The colors and designs as well as the size of pitchers vary. Some even have themes, such as Christmas pitchers with &#8220;Buon Natale&#8221; painted on them. All of the chickens have beaks open as if they&#8217;re squawking.

Gianluci Fabbro&#8217;s family has been making the pitchers in Rivignano, a town a short distance southeast of Aviano, since the early 1900s and still sells the decorated birds to many Italians.

But the bulk of the 10,000 ceramic pitchers he produces each year goes to American and German tourists.

&#8220;The American people, they like the story around this item,&#8221; said Fabbro, who has a two-liter pitcher of his own at home sporting a sunflower paint job &#8212; the most popular.

Pitchers typically come with a piece of paper stuffed in them that tells the purported history of the chicken pitchers. No one seems to know where it originated or if it&#8217;s fact or fiction, but the tale centers on two powerful families, a party, lots of evil plotting and, of course, poultry. Here&#8217;s the gist of it:

There were two wealthy families in the Republic of Florence in the early Renaissance period who were rivals for power. The Medici family held the power, but the Pazzi family wanted to grab it by killing the Medicis.

The Medicis, who had amassed their wealth by making peasants work their large land holdings, occasionally threw festivals for the peasants. Giuliano Medici especially liked the parties. So the Pazzis had someone suggest to Giuliano that he hold a festival in a village where one had never been held before.

The Pazzis then plotted to kill Giuliano and his guards at the end of the festival because they would be vulnerable from having drunk copious amounts of wine.

The Pazzis hired assassins, who probably would have succeeded except they had to sneak across a chicken yard to get to Giuliano. The chickens cackled in such a frenzy that it woke Giuliano and his guards, who caught and killed the assassins.

Giuliano was so excited that the chickens had warned him that he threw another festival the next night. He ordered artisans to create ceramic copies of chickens to be used as wine pitchers. Then he gave them to the peasants for good luck.

Today, the tradition is to give a chicken pitcher to friends and family or as housewarming gifts to protect them from trespassers and danger.