In WWII, the bridge at Remagen allowed US troops to cross the Rhine 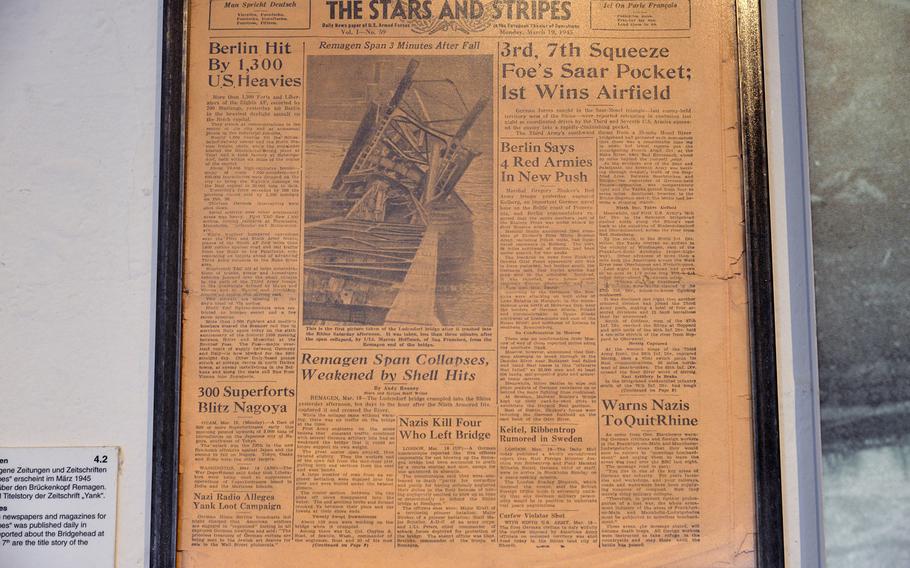 A front page photo and a story by Andy Rooney about the collapse of the Ludendorff Bridge at Remagen, Germany, appeared in the March 19, 1945, edition of The Stars and Stripes. Captured by the U.S. Army intact on March 7, the bridge collapsed on March 17, killing 30 soldiers. The newspaper is one of many items on display at the Peace Museum inside the bridge's west bank towers. (Michael Abrams/Stars and Stripes)

It was called Operation Lumberjack. The World War II plan was to get the U.S. Army across the Rhine River, capture Cologne, secure the Koblenz sector and push east.

Cologne fell on March 5, 1945. Farther upriver, the troops needed to find a way to cross the Rhine. The remnants of the Ludendorff bridge on the west bank of the Rhine River in Remagen, Germany. Despite the Nazi's attempt to destroy the bridge it was captured intact by 9th Armored Division soldiers on March 7, 1945, enabling thousands of troops to pour over to the eastern side of the Rhine. The battle for the bridge was the subject of the 1956 book, "The Bridge at Remagen," and a 1969 film of the same name. (Michael Abrams/Stars and Stripes) 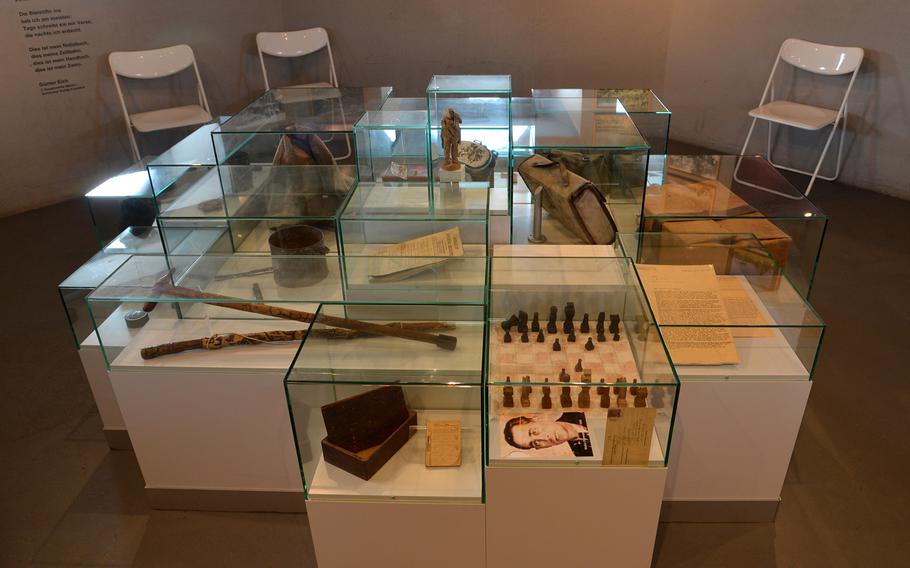 A room in the Peace Museum in the towers of the remnants of the Ludendorff Bridge in Remagen, Germany, features an exhibit on the American prisoner-of-war camp at Remagen, which was in operation from April to July 1945. (Michael Abrams/Stars and Stripes) 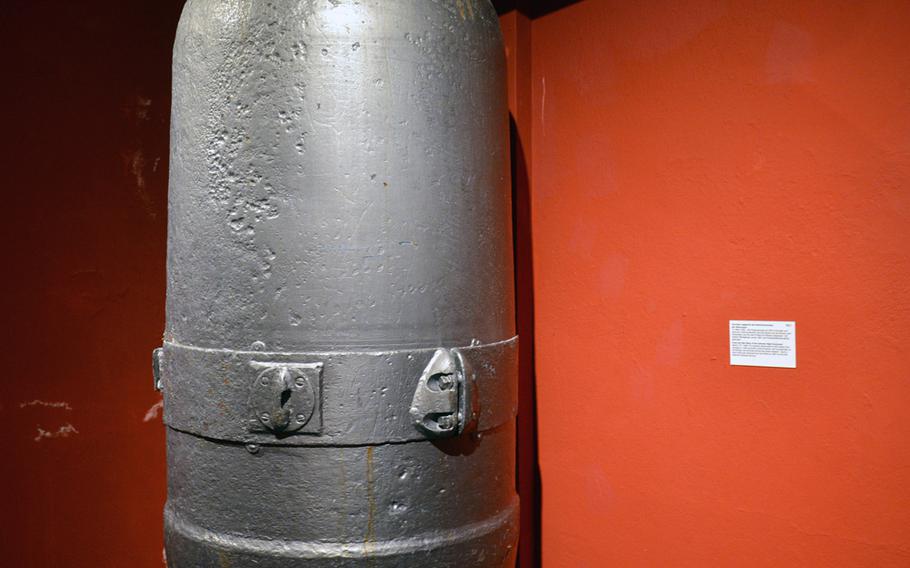 After the U.S. Army captured the Ludendorff Bridge intact, the Nazis continued to try to destroy it. This unexploded bomb, on display at the Peace Museum in Remagen, Germany, was pulled out of the Rhine River in 1981 by the German War Materiel Disposal Service (Michael Abrams/Stars and Stripes) 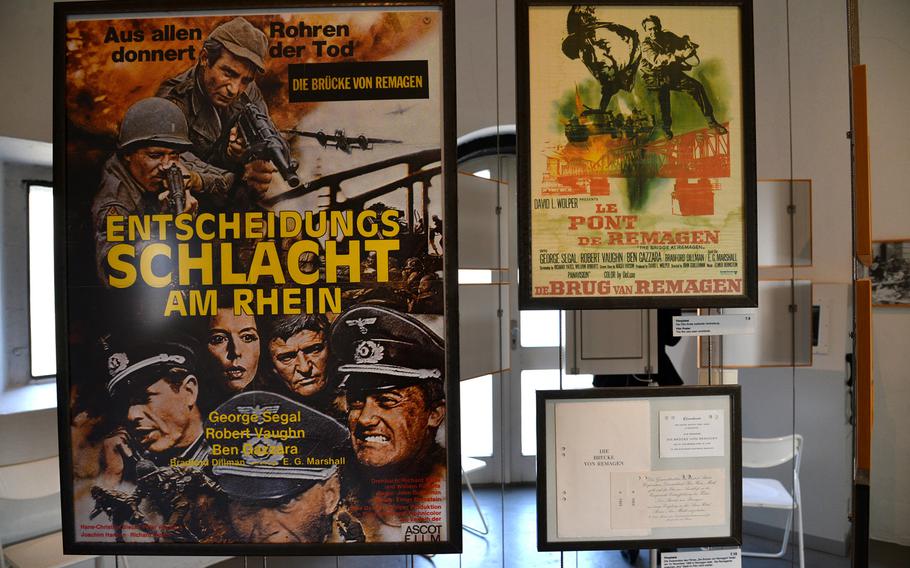 A German and a Belgian poster for the 1969 movie "The Bridge at Remagen," based on the book by Ken Hechler, is on display at the Peace Museum in Remagen, Germany. Filming of parts in Czechoslovakia was interrupted by the Soviet invasion of that country in 1968. (Michael Abrams/Stars and Stripes) 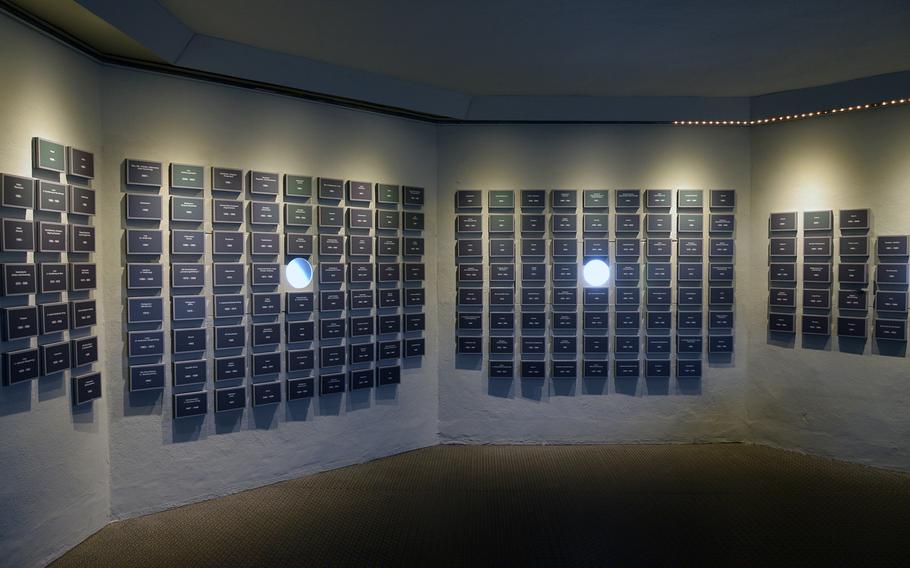 Each plaque on the wall of a room in the Peace Museum in Remagen, Germany, represents a war or conflict between the end of World War II and today. The museum is inside the two towers on the west bank of the Rhine River in the remains of the Ludendorff Bridge, destroyed in World War II. (Michael Abrams/Stars and Stripes) 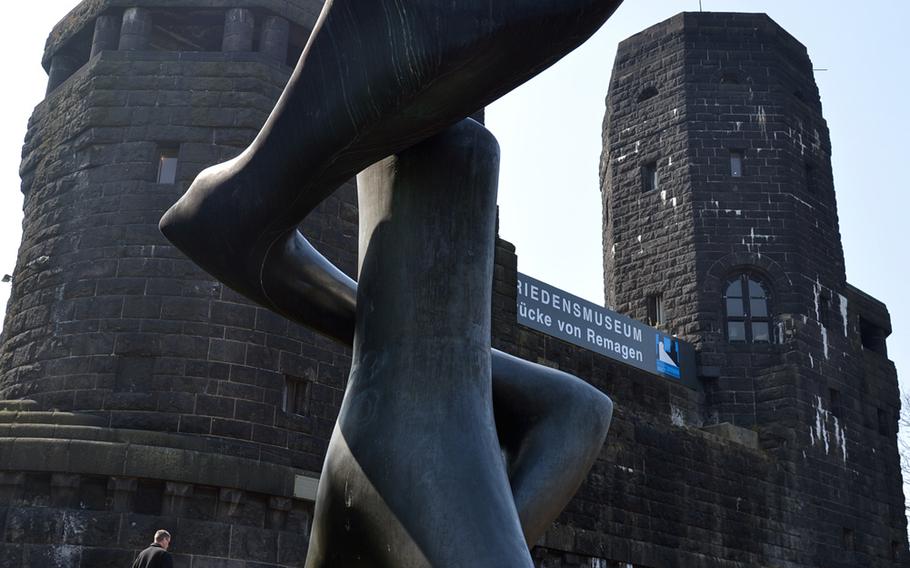 The sculpture "Liebeskraft" by Hungarian artist Lajos Barta stands on the west bank of the Rhine River in front of the remnants of the Ludendorff Bridge, which houses the Peace Museum. The bridge was captured by the U.S. Army on March 7, 1945, and used until it collapsed on March 17, 1945. (Michael Abrams/Stars and Stripes) 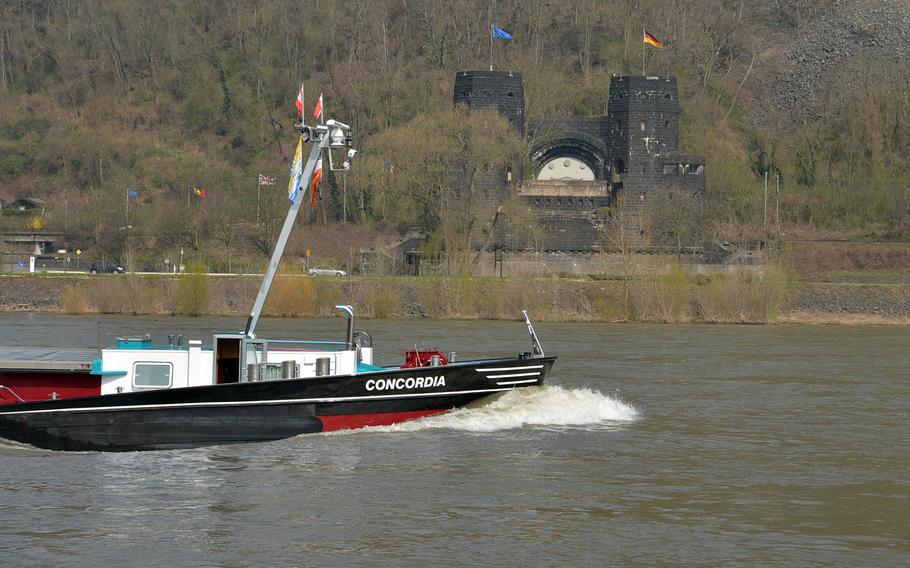 A ship plies the Rhine River passing the towers of the former Ludendorff Bridge on the west bank of the Rhine near Erpel, Germany. The structure and a similar one on the east bank at Remagen are all that is left of the bridge, destroyed in World War II. The white half circle was a railway tunnel. The structure on the west bank houses the Peace Museum. (Michael Abrams/Stars and Stripes) 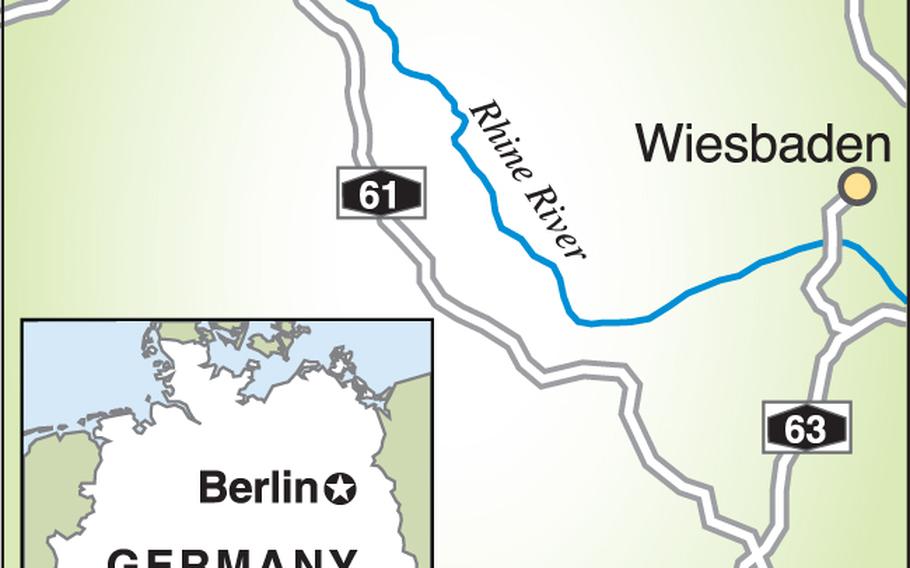 As the 9th Armored Division swept through the Eifel Mountains to the Rhine, they came to Remagen and found, to their surprise, that the Ludendorff railroad bridge was still standing. Despite the Nazis’ attempts to destroy the bridge as the Americans approached, the soldiers fought their way across, capturing it on March 7. The Germans continued to try to take the bridge down, but to no avail.

Eventually, however, the Nazi efforts, together with the burden of carrying soldiers and armor, took their toll and the bridge collapsed on March 17, killing 30 soldiers. By then thousands of troops had crossed the river over the bridge that Gen. Eisenhower said “was worth its weight in gold.”

Today all that remains of the bridge at Remagen are twin castlelike towers on both sides of the river. Inside the surviving structure on the Rhine’s west bank is the Peace Museum. It opened in 1980 and was the brainchild of former Remagen Mayor Peter Kürten.

Popular with World War II history buffs, the museum contains an exhibit that traces the history of the bridge, the battle for it and its aftermath. There is also a section dedicated to peace.

The bridge was built during World War I to get German troops to the western front faster. It was finished in time for the retreating German army to cross it heading east.

A section of the exhibit shows what life was like for German soldiers guarding the bridge during World War II, while another follows first Allied attempts to destroy the bridge — luckily they failed — then the successful capture.

Also on exhibit are posters and still images from the 1969 movie “The Bridge at Remagen.” Production of the film, shot partly in Czechoslovakia, was interrupted by the Soviet invasion of that country in 1968.

The most disturbing part of the exhibit is the section on the huge American prisoner-of-war camp at Remagen, which held as many as 50,000 POWs from April to July 1945.

The top two floors of one tower are dedicated to peace, containing works of art, a list of Nobel Peace Prize winners and quotes and thoughts on the subject by well-known personalities. One can find quotes and observations by “ordinary” people on the lower level.

The walls of the upper floor are lined with small plaques. Each one represents a conflict somewhere in the world from the end of World War II to today.

Outside the museum, on the bank of the Rhine, stands a large sculpture, “Liebeskraft” (Love Power), by Hungarian artist Lajos Barta. Adorning the bridge’s dark stone wall are plaques dedicated to the U.S. Army soldiers who captured the bridge and crossed it on their way to defeating Nazi Germany.

Ludendorff railroad bridge, Remagen Germany DIRECTIONS Remagen is on highway B9 on the Rhine River between Koblenz and Bonn. In Remagen there are signs to the Friedensmuseum (Peace Museum).

FOOD Cafes and restaurants are a short walk along the river to downtown Remagen.