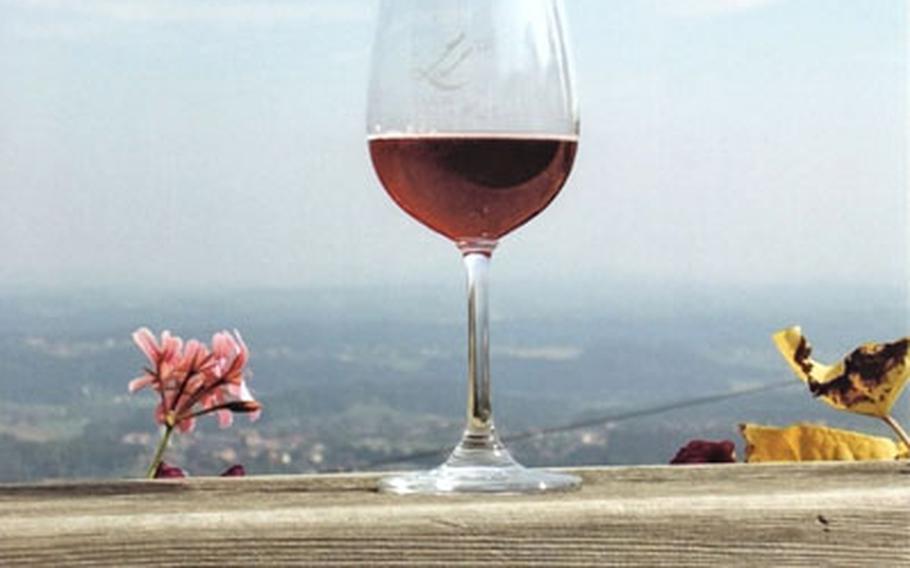 The roads in southern Austria twist and turn through lush green meadows dotted with Alpine farmhouses and grazing livestock. This is the heart of agrarian Austria, where most of the country’s apples are grown, where its famous pumpkin seed oil is produced, and where the grapes that produce fruity, dry white wines and the local Schilcher dominate the small vineyard production.

Until recently, this region around Graz, Austria&rsquo;s second-largest city, was one of Europe&rsquo;s best-kept gastronomic secrets. But Austria&rsquo;s commitment to viniculture and organic farming is turning the region of Styria into a world-class food and wine destination.

Austrian wines are beginning to appear on the radar of wine lovers throughout the world. Lower Austria has eight wine regions that are becoming well known for their stellar whites, such as the dry, food-friendly Gruner Veltliner, the crisp Pinot Blanc called Weissburgunder, and a wide range of Reislings that are helping fuel the country’ wine growth.

Seventy-five percent of the vineyards are devoted to white wine varieties, most of which have a dry, crisp quality due to the geographical factors of climate and soil.

But the most unusual wine is the rose Schilcher, produced only in Western Styria. It is what draws flocks of wine lovers to the vineyards, wine taverns and restaurants of the region.

The region has the most temperate climate in the country, a significant factor for growers of its indigenous Blauer Wildbacher grape, used to make Schilcher. Aged in wooden barrels, it is a sweetly elegant wine that tastes like liquid strawberries.

To see the region at its best, try a little tour that mixes lunch, wine tasting and sightseeing. You can go on your own or arrange a tour at the Graz tourist office: the Schilcher Route is one of the most popular day trips from the city.

Begin at B&auml;rnbach, a town east of Graz just off Autobahn 2. Head south toward Stainz, stopping for lunch at Weingut Langmann, a traditional Buschen- sch&auml;nken, or wine tavern.

Start with a flute of certified Stierische K&uuml;bisker&ouml;ol, the Schilcher version of champagne. Then try a crisp white wine with a platter of Brettljause, a cornucopia of locally produced meats, cheeses, pat&eacute;s, spreads, and home-baked bread. By law, the taverns are allowed to serve cold food only, and must work with local growers for the high quality, authentic regional food that accompanies their vintages.

After a relaxing repast on the terrace overlooking the vineyards and farms in the valley below, head south to Stainz to board the Flascherlzug steam train. Grab a schnaaps or a glass of Schilcher at the impromptu train station bar, and chug along slowly through the local villages and farms, serenaded by Austrian folk music from an accordion player. 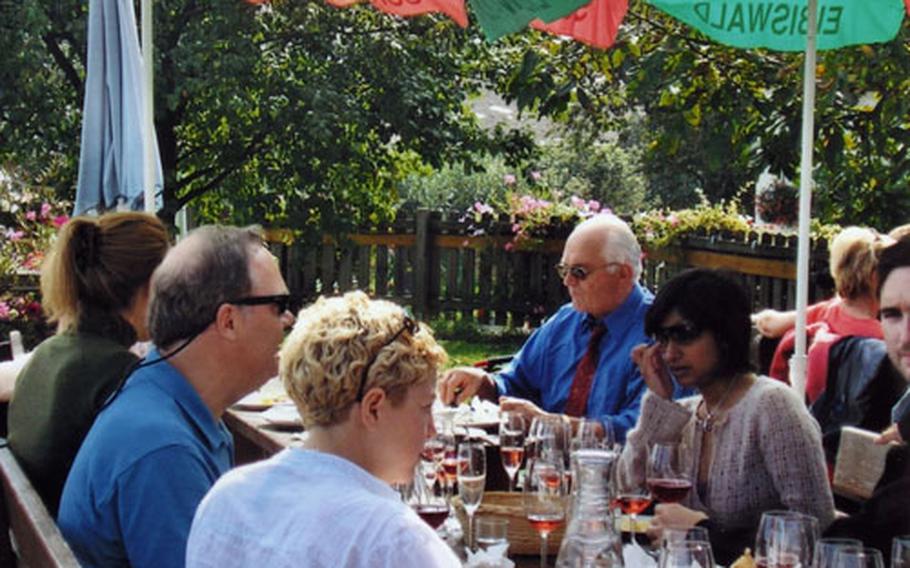 Hop off at &Ouml;lm&uuml;hle Herbersdorf to visit the oldest pumpkin seed oil press in Styria. The owner of this award-winning operation opens his presentation with an apology, saying, &ldquo;My English accent is worse than Arnold&rsquo;s.&rdquo; His self-deprecating joke refers, of course, to California governor and former actor Arnold Schwarzenegger, who grew up in this region.

While a demonstration of the oil extraction process is fascinating, the noxious fumes in the pressing room might hurry you along. Fortunately, the final product bears no resemblance to the processing, and cutting-edge chefs throughout the world covet the intriguing taste of the oil as a garnish for everything from soup to ice cream. Visit the gift shop to pick up a bottle of this culinary secret weapon or a jar of sinfully good apple preserves, also made locally.

Back in Stainz, visit one of Styria&rsquo;s oldest wine cellars at the Weinhaus. A cooperative wine bar and shop owned by local vinters, the Weinhaus showcases more than 20 regional growers in a modern culinary facility that offers an extensive selection of Austrian wines, a mini-gallery of local artwork and meals pairing local wine with meals from a state-of-the-art kitchen.

The knowledgeable sommelier, Gerald Summer, can introduce you to the best wines of the region, including his favorites, the crisp Sauvignon Blancs and Gr&uuml;nervetliners.

Then, for a perfect ending to the day, head west of the city center to the Rauchhof for a cozy dinner or nightcap in this farmhouse-inspired restaurant, known for its fresh regional produce and Styrian wine list.

One final tip: Thanks to the vision of its regional vinters and the country&rsquo;s commitment to quality control, the Styrian wine region will not be a secret for long. It might, in fact, be the wine world&rsquo;s next big discovery.

Ginger Ward is a freelance writer living in Florida. E-mail her at: DolphTal@aol.com.

Know and go ... Just 2½ hours south of Vienna, Graz is a perfect jumping-off point for an epicurean odyssey.

Named Europe&rsquo;s Cultural Capital in 2003, Graz is a quirky mix of medieval charm and modern beauty. It is a good place to see on foot.

Two futuristic exhibits from the cultural celebration, the peanut-shaped Kunsthaus and the Murisel, a mussel-inspired steel island in the middle of the River Mur, look as if they were dropped from outer space into the heart of the old city.

For a sweeping view of the turquoise domes and the red tile roofs of the old city, take the funicular to the original fortifications at the Schlossberg.

Pay an early-morning visit to the farmers market behind the Opera House for a glimpse of some of the region&rsquo;s finest organic foods and flowers, and stop by the former court bakery, Hofbakerei Edegger-Tax, for the best pastry in town. Sip a sunset aperitif in the middle of the river at Murisel, and sample a traditional Styrian meal of Tesserfluggel (boiled beef) at the Landhaus Keller, which also boasts one of the city&rsquo;s best wine cellars.

Graz Tourism (www.visitgraz.com) offers day trips to the Styrian wine region and the Lipizzaner stallion farm at nearby Piber, beginning at 24 euros for adults, 9 euros for children 6-15, or a family package of 49 euros. It also has great maps and directions for those who prefer to drive themselves.

Both the Graz Tourism Web site and the Austrian tourism site (www.austriainfo.com) have information on flights, trains and driving directions. The Austrian site has a route planner with point-to-point directions, and links to the airlines and trains that service the region with flying, train, and drive times and distances.

While there are no military discounts to attractions in Graz or the wine region, the Graz Tourism Office offers good deals on family packages for various excursions. Take advantage of the excellent tram system, and buy a 24-hour pass that also allows you to ride the funicular to and from the Schlossberg, as well as unlimited rides on both the trams and buses during your time period. It&rsquo;s a real deal at 3.70 euros.

The Wietzer Hotel Group (www.weitzer.com) offers three choices for accommodations: the five-star Grand Hotel Wiesler, the four-star Das Weitzer, and the new, trendy Hotel Daniel (www.hoteldaniel.com), next to the train station. Prices range from 59 euros per night at the Daniel to more than 250 euros per night at the Wiesler.

To spend a night in wine country, splurge on the exclusive castle-turned- hotel Schloss Obermayerhofen (www.obermayerhofen.at) or enjoy the farm life at Wirsthaus Jagawirt to the west of Graz (www.jagawirt.at)

— www.styrianwine.com, for more on the local wines;

— www.oelmuehle.herbersdorf.at, for details on the oldest pumpkin seed oil press in Styria;