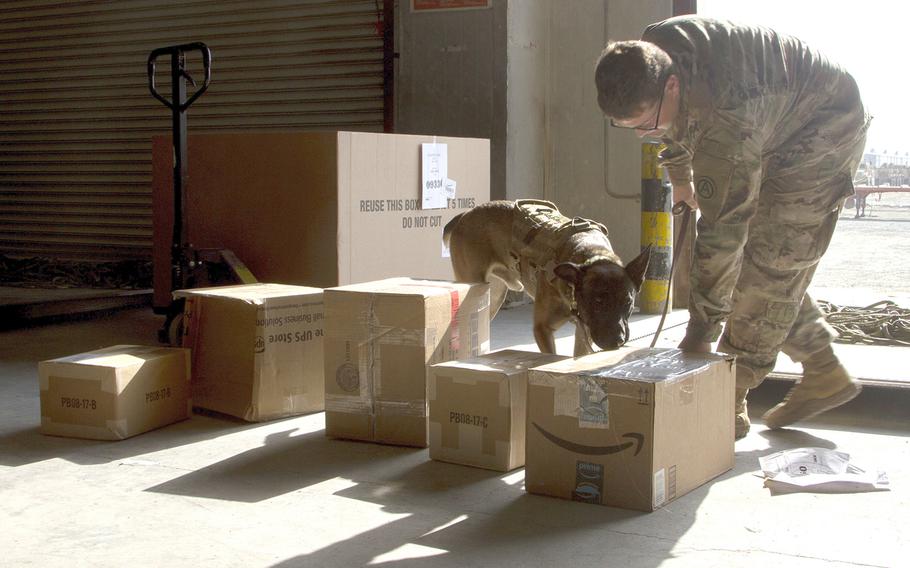 Servicemembers stationed overseas probably don’t think much about how their mail to and from the United States is delivered through the immense system of Army, Air Force and Navy post offices.

In 2018, the Defense Department’s Military Postal Service Agency oversaw the delivery of 88,618 tons of packages and letters sent or received by overseas soldiers, sailors, Marines, airmen and federal employees at about 1.2 million post office boxes, unit mail rooms, buildings and other delivery points.

The average military mail customer has also likely given little thought to an arcane international treaty called the Universal Postal Union — but they’re apt to hear a lot more about it by October.

The Trump administration announced last year that the U.S. would withdraw from the 144-year-old treaty, primarily over growing complaints by some U.S.-based businesses that packages sent to the States from other countries — primarily China — have much lower postal rates.

In some cases, U.S. businesses spend more to mail a package domestically than a China-based firm would pay to ship to America.

“The big fight is over delivery charges,” said James Campbell Jr., a Washington, D.C.-based attorney who specializes in regulations concerning international shipping. “The Trump administration is saying that we are delivering Chinese packages in particular — but all foreign e-commerce packages, really — for somewhere between a third to half of what we’re charging Americans for the same service. That’s crazy. The domestic merchants are complaining about that.”

October deadline The U.S. is slated to drop out of the postal union treaty in October unless changes are made by the Bern, Switzerland-based body that governs the system.

Because the treaty has been in effect so long and includes almost all the world’s nations, the ripple effects of withdrawal are unpredictable.

The U.S. Postal Service seems to be counting on a meeting scheduled for September during which treaty members will discuss changes to “terminal dues,” which are the rates each member nation pays for delivery of mail within other countries.

“This will provide a new opportunity for UPU members to collaborate and develop solutions to end the distortionary effects associated with excessively low rates for certain foreign origin mail, as compared to domestic postage rates,” the Postal Service said in a statement to Stars and Stripes.

But the Postal Service is also undertaking “parallel efforts” in the event the U.S. withdraws from the treaty, including “addressing and prioritizing military mailing issues,” the statement said.

Pete Graeve, chief of plans and policy for the Military Postal Service Agency, was optimistic about the potential impact leaving the postal union will have on the APO — or Army Post Office, also used by the Air Force — and the Navy’s Fleet Post Office, or FPO.

“The bottom line is that we have host nation agreements/status of forces agreements/diplomatic notes that allow the [Military Postal Service] to operate in host nations, and we expect host nations will not unilaterally abrogate those agreements,” Graeve wrote in a response to questions by Stars and Stripes.

“The UPU issue pertains to international civil mail postage remuneration, not military mail which is considered domestic and does not have international postage,” Graeve said.

“[The Defense Department] is developing contingency plans in the event a host nation does abrogate an agreement to minimize any potential disruptions and continue providing support to our service members and their families.”

If these host nations were only dealing with U.S. withdrawal from the Universal Postal Union treaty, it seems less likely they would abrogate agreements governing military mail.

But the Trump administration is already at odds with European allies over his unilateral withdrawal from a 2015 nuclear deal with Iran in which the nations traded sanctions relief for Iran’s delay in enriching uranium.

Consequently, some countries may not have the appetite to negotiate a postal agreement with the United States.

John Couch, a co-founder of ShipitAPO, which helps overseas servicemembers receive packages from retailers that will not send to APO and FPO addresses, has tried unsuccessfully for months to get clear answers from government officials about what the military-mail landscape will look like if the U.S. leaves the postal union.

“Even if new postal treaties can be re-established with each APO-FPO host nation, this will not happen overnight,” Couch said. “And there’s no guarantee that the new agreements will be as favorable regarding allowable items, package sizes, weights and quantities. We can only hope for the best.”

One likely and immediate outcome of U.S. withdrawal from the postal union would be increased customs security for both military and civil mail, said Campbell, who sits on the State Department’s Advisory Committee on International Postal and Delivery Services.

“If the U.S. leaves the UPU in October, my guess for APO/FPO mail is that there’s going to be increased customs scrutiny, at least in the big countries. That’s going to entail more costs.”

That increased scrutiny and cost will come regardless of the treaty status, though, he said. Last year Congress passed a law that beginning in 2021 all postal packages must undergo the same strict customs procedures required for packages shipped via Federal Express and the like, he said.