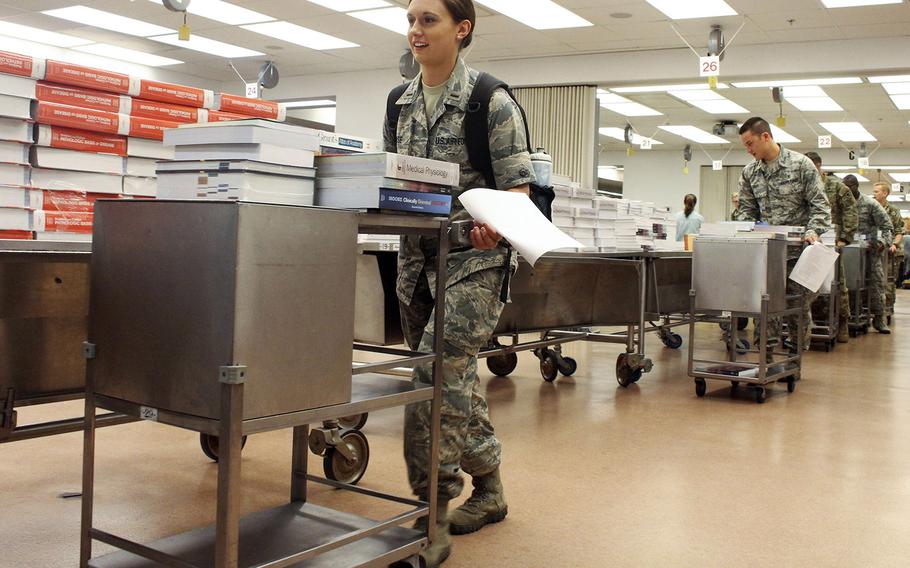 In a 2016 photo, first-year medical students at the F. Edward Hebert School of Medicine at the Uniformed Services University of the Health Sciences receive more than 140 pounds of books each inside the anatomy lab. A Politico report says the university is one of the DOD's targets for a considerable funding reduction. (Laura Bailey/U.S. Navy)

WASHINGTON — President Donald Trump said he would not allow a major cut to the Pentagon’s health care system under consideration by defense officials as part of an annual process to reprogram funds to warfighting priorities such as weapons and training.

Trump tweeted late Monday his displeasure with the reported $2.2 billion cut over five years, which defense officials were planning to propose soon to Defense Secretary Mark Esper as part of his second annual effort to cut costs from noncombat defense functions. Esper, too, issued a tweet announcing his opposition to the proposal and rejected the initial reporting Sunday about the cuts by Politico as “inaccurate.”

“A proposal by Pentagon officials to slash Military Healthcare by $2.2 billion dollars has been firmly and totally rejected by me,” Trump tweeted, seeming to confirm the existence of the proposal. “We will do nothing to hurt our great Military professionals & heroes as long as I am your President. Thank you!”

In Esper’s tweet, which was posted about an hour after Trump’s, the defense secretary said he had yet to be briefed on the reported funding cuts, but he would not approve any cost-slashing proposals that would harm medical access for Defense Department personnel.

"I have not directed nor approved any cuts to our military healthcare system in our future budgets," Esper wrote. "Furthermore, I will not allow any reduction that would harm access to quality medical care for our service members, their families, and our larger DoD community."

The proposed cuts come as a part of the second annual defense-wide review, an Esper-directed effort to strip billions of dollars from the Pentagon’s so-called Fourth Estate, which are all of its entities that fall outside the military departments. Those funds, Esper has argued, would be better used to prepare troops for potential fights with power rivals such as China or Russia. Last year, the review identified some $5.7 billion in Fourth Estate funding that officials proposed moving into the military departments in their proposed fiscal year 2021 budget, which Congress is now considering.

Esper has asked officials to find another at least $5 billion of funding to cut from Fourth Estate entities in the current review, which would be reflected in its fiscal year 2022 budget request due early next year.

While Trump, Esper and the Pentagon’s chief spokesman Jonathan Hoffman strongly rejected the possibility of a $2.2 billion cut to the Defense Department’s health system, officials declined to provide any additional information about the proposal. Pentagon spokespersons on Monday and Tuesday declined any comment on the issue, saying the tweets from Hoffman and Esper were the only information they could provide.

The spokespersons said they could not say whether health care programs would be entirely spared cuts in the ongoing funding review, but Esper’s statement did not rule out at least some future budget reductions within the Pentagon’s health system, which includes hundreds of military hospitals, clinics and other treatment facilities, its medical-training program, and Tricare, the military’s health insurance program.

Politico’s report, which cited several unnamed defense officials, identified the Uniformed Services University of the Health Sciences as one of the targets for a considerable funding reduction. The Bethesda, Md., institution includes a medical school and graduate-level training in medical-related fields for nurses and scientists. The school’s medical students are commissioned into the military or the U.S. Public Health Service and must serve at least seven years.

Politico reported the officials said the cut would ensure the institution would slowly “be bled to death.” In Esper’s tweeted statement, he said the Pentagon was committed to ensuring its health care professionals were well-trained, but did not specifically address the Uniformed Services University of the Health Sciences.

The Pentagon’s medical system is already facing changes in the coming years as a result of a restructuring assessment mandated by Congress in 2017.

That plan submitted to Congress in February would cut family and military retiree access to 37 military hospitals and clinics. It would downsize some hospitals and clinics and eliminate three completely. Other facilities would be enlarged and provide added capacity to care for active-duty troops, their families and retirees.

The Pentagon assessed some 200,000 family members and retirees would be forced to seek Tricare-funded private health care under the plan. But that plan would also save the Defense Department some $36 million in 2021, officials said in February.