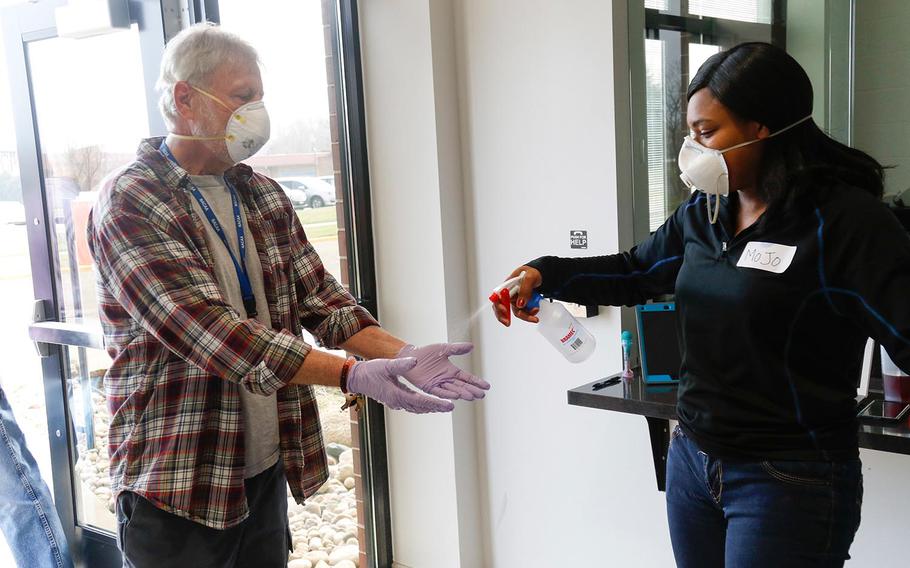 Sgt. Monica Miggins, right, a soldier with the 1158th Transportation Company out of Beloit, Wis., sanitizes a voter's hands before he enters a polling station in Fitchburg, Wis., on April 7, 2020. More than 2,400 Citizen Soldiers and Airmen were mobilized to state active duty to assist as poll workers in the stateâ€™s election. Wisconsin National Guard Photo by Spc. Emma Anderson (Emma Anderson/Wisconsin National Guard)

Sgt. Monica Miggins, right, a soldier with the 1158th Transportation Company out of Beloit, Wis., sanitizes a voter's hands before he enters a polling station in Fitchburg, Wis., on April 7, 2020. More than 2,400 Citizen Soldiers and Airmen were mobilized to state active duty to assist as poll workers in the stateâ€™s election. Wisconsin National Guard Photo by Spc. Emma Anderson (Emma Anderson/Wisconsin National Guard)

Master Sgt. Mike Moore, an airman with the 115th Fighter Wing, sanitizes voter pens after every use in Fitchburg, Wis., on April 7, 2020. More than 2,400 Citizen Soldiers and Airmen were mobilized to state active duty to assist as poll workers in the Wisconsin's primary election. Wisconsin National Guard photo by Spc. (Emma Anderson/Wisconsin National Guard) 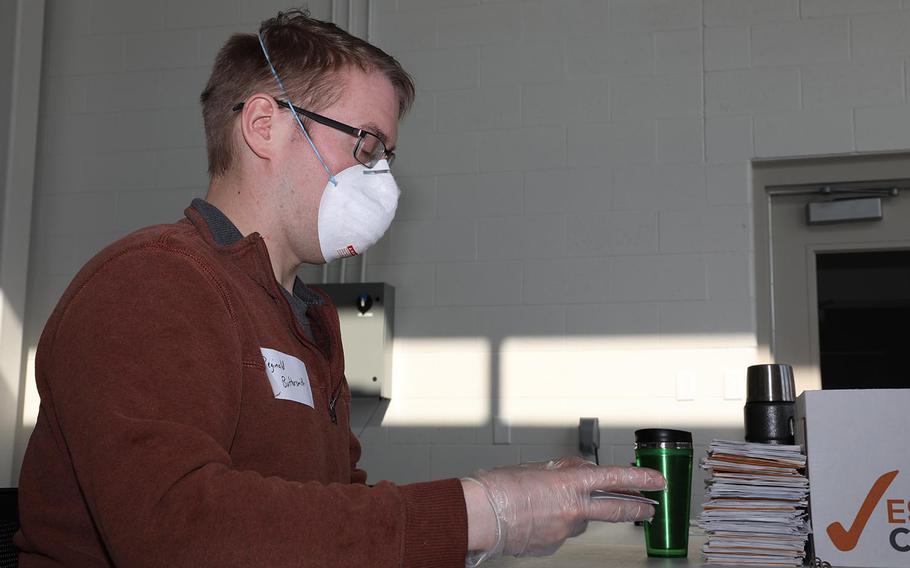 “What’s unique about this mission for the Guard is it allows our guardsmen to serve in the communities that they live in. It’s neighbors helping neighbors,” said Army Brig. Gen. Robyn Blader, assistant adjutant general for the Wisconsin National Guard.

Speaking during a late Wednesday call between officials from four state National Guards and reporters, Blader said Guard support for Tuesday’s elections has not been finalized, but is expected to mirror what happened in three previous elections that troops supported earlier this year. Guard assistance during an April election included the activation of 2,400 troops to serve as poll workers — one of the largest deployments in Wisconsin’s history for community support. Troops also distributed hand sanitizer and personal protective equipment to combat the spread of coronavirus among voters.

“There was a heightened fear at that time,” Blader said, referring to the coronavirus pandemic that had begun in the U.S. a month earlier. “That fear isn’t quite as high moving into the November elections.”

With the presidential election just days away and a large voter turnout expected, other states have announced plans to use their National Guard troops to assist with cybersecurity. In some states, Guard and law enforcement officials also are discussing the potential need for security should protests or civil unrest follow what has been an unusual presidential election season.

In Kentucky, where 280 troops will support poll workers at voting locations in 38 counties, officials were clear the “support will be in a non-law-enforcement capacity,” according to a news release. Instead, they will help with setting up and cleaning polling locations and assisting with traffic, parking and crowd control, just as they did in a June election.

After a summer of racial and political unrest across the country, there are concerns about possible violence during and after Tuesday’s election and the use of the Guard to control crowds has been floated in some states, according to officials on Wednesday’s call and news reports.

Texas has been reported to be activating up to 1,000 National Guard troops as soon as the weekend to protect state government facilities and landmarks, according to the San Antonio Express-News.

Officials at the Texas Military Department declined to confirm or deny the deployment, but released a statement that troops have not been requested at any polling locations in the state. Texas Gov. Greg Abbott’s office also declined to comment.

The mission to protect landmarks, in support of the Texas Department of Public Safety, began in the summer and remains ongoing, Maj. Gen. Tracy R. Norris, adjutant general of Texas, said in a statement.

Guard officials in Nebraska, Wisconsin, Tennessee and Washington said they are speaking with police departments and state law enforcement officials to determine what might be needed to ensure the safety of people and property following the election.

“It’s not new,” said Air Force Maj. Gen. Daryl L. Bohac, adjutant general for the Nebraska National Guard. “It’s something we do year in and year out for a variety of events.”

To ensure that no one is alarmed about a military presence at polling locations where National Guard members are working, each state said their service members will work in civilian clothes. Should an issue develop at the polling site, Guard members are advised to call 911 if there is violence or a disturbance at the location where they are working, according to the officials in the three states with troops deployed at voting sites.

Prior to 2020, Wisconsin had never used National Guard troops as poll workers, but Tuesday will mark the fourth time since April for Guard members to conduct such a mission, Blader said.

About 30 Tennessee Guard troops will assist by opening 13 of Guard facilities in rural areas to serve as polling locations, said Army Maj. Gen. Jeff Holmes, adjutant general for the state’s Guard. Full-time, uniformed personnel of those facilities will work off-site that day, but about two Guard members will work each site to open and close the facility, he said.

The Tennessee Guard also is offering counties across the state cybersecurity support, Holmes said. They began this effort last year, but demand has increased because of a “higher situational awareness of vulnerability,” he said.

“It makes sense to have military-grade helpers out there,” Welsh said. “We teach them how to do these things as well.”

Between the coronavirus pandemic, numerous weather events and the racial unrest that began in late May, officials conceded they have worked to keep a balance between fulfilling the needs of their state and maintaining readiness for overseas missions.

While the state of Louisiana hasn’t requested poll support, troops from that National Guard are involved in missions for coronavirus relief, recovery from three hurricanes and an overseas deployment of one of the state’s largest brigades, according to the state’s Guard.

“There has definitely been some stress, op-tempo wise,” said Holmes of Tennessee. Troops in Tennessee activated March 3 in response to a tornado that devastated parts of the state and activation levels have ebbed and flowed ever since, peaking at about 2,000 in the spring.

Bohac in Nebraska also said the state’s medical providers have carried a heavy burden since March.

“We rely 100% on volunteers and we’ve never lacked for support of soldiers and airmen who want to come on and serve their communities and neighbors,” he said.