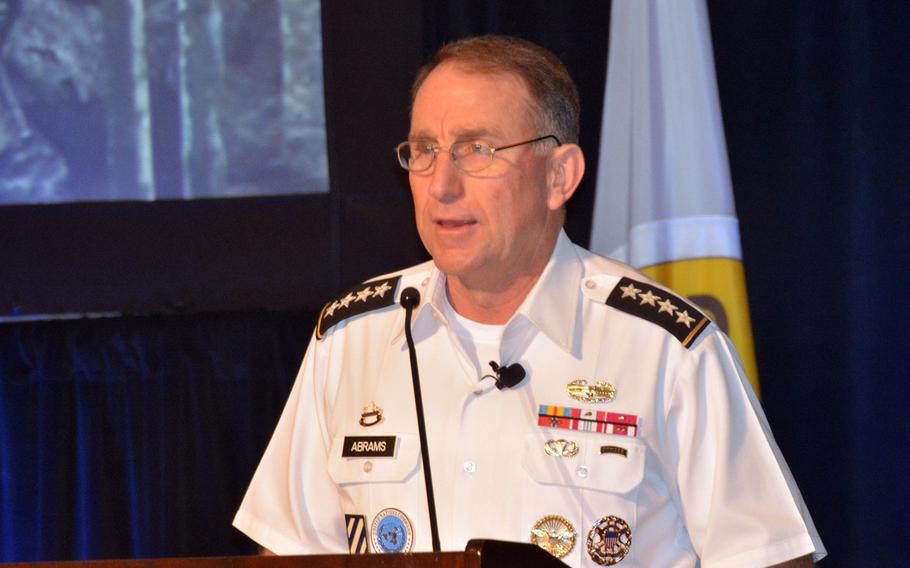 Buy Photo
Gen. Robert Abrams, commander of U.S. Forces Korea, told a symposium audience in Honolulu, May 22, 2019, that the combined U.S.-South Korean military force has suffered no loss of readiness with the suspension of large-scale exercises last year. (Wyatt Olson/Stars and Stripes)

“I want to be crystal clear about it,” Gen. Robert Abrams said at the three-day Land Forces Pacific Symposium in Honolulu. “Combined training and readiness, it has hasn’t slowed down one bit. We are continuing to conduct very rigorous combined training at echelon, over 100 exercises thus far in 2019 alone. It happens at multiple levels.”

“This was a prudent action in support of diplomacy,” he said during a keynote speech followed by a question-and-answer session for an audience of primarily soldiers from the U.S. and Pacific partner nations.

“Following those suspensions, we have worked to evolve our exercise design and execution by tuning four dials: size, scope, volume and timing, bringing us into harmony with ongoing diplomatic efforts.

The modification of exercises was not “a concession,” he said, bristling at reports that the United States gave away more than it got in the Singapore tête-à-tête.

“We continue to validate our combined defense posture,” he said. “Any suggestions to the contrary – and I’ve heard them all – are simply not true. This is a theme, most often repeated by theorists and pundits, who simply do not know the ground truth.”

He did, however, concede a major difference in how such drills have been conducted since the Singapore talks.

“We just don’t talk about it,” he said, adding that combined South Korean and U.S. forces go about “quiet, professional work.”

Abrams equivocated when asked by an audience member whether the firing of short-range missiles by North Korea earlier this month was an indication its military was fielding new capabilities.

“So, characterizing recent events, it all depends where you sit,” he said. “My own perspective is that militaries around the world conduct routine military activities that include training of their specific capabilities. We ought to just leave it at that.

“We have a very good site-picture of what is and is not going on in North Korea,” he said.