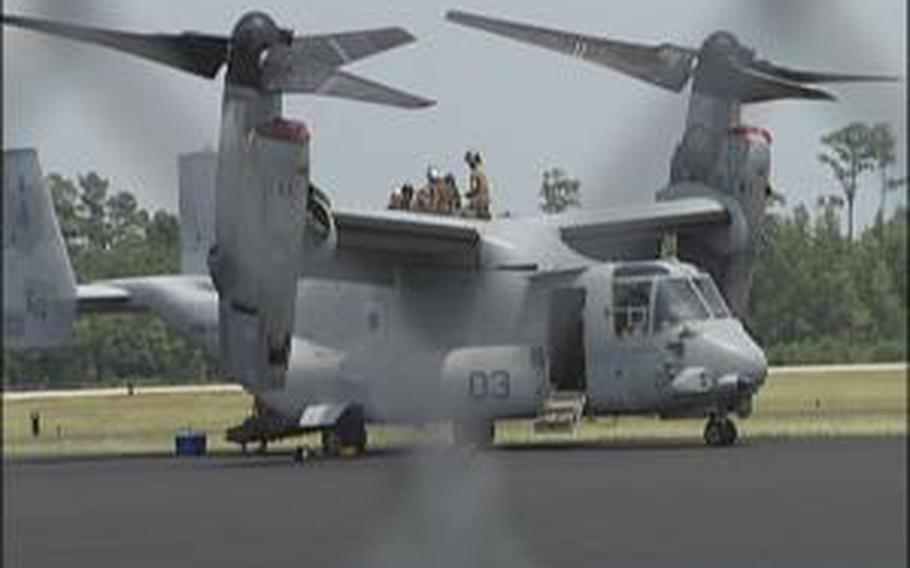 This MV-22B Osprey made an emergency landing at North Carolina’s Wilmington International Airport due to some trouble with the plane’s drive shaft during a training flight July 9, 2012. (Courtesy WWAY3)

A tilt-rotor Osprey required an emergency landing Monday afternoon during a training flight on the U.S. East Coast, drawing even more attention to the controversial Marine Corps aircraft.

According to multiple media reports, the MV-22B Osprey belonging to Marine Corps Air Station New River made its emergency landing at North Carolina&rsquo;s Wilmington International Airport due to some trouble with the plane&rsquo;s drive shaft.

Marine Corps officials were quoted saying the pilot landed in full control of the aircraft and that there were no injuries.

Osprey aircraft crashed in Florida in June and in Morocco in April. An upcoming deployment of 24 Osprey to Okinawa has received fierce local opposition and unwavering coverage by the Japanese media.

The Japanese government recently released a Marine Corps environmental review, comparing safety data and crash history between the Osprey and the aircraft it is replacing, the CH-46E Sea Knight.