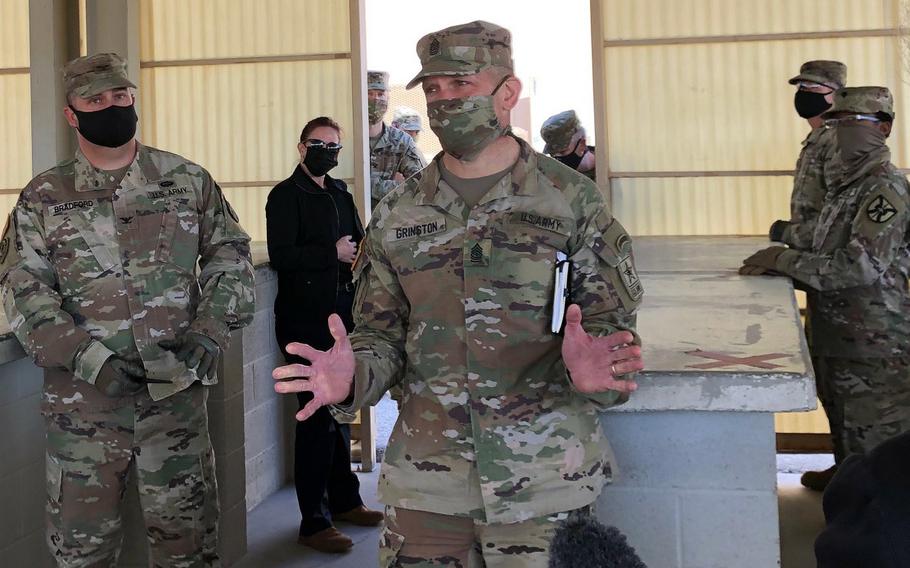 WASHINGTON — Some Army noncommissioned officers selected for promotion will be able to advance to their new ranks before completing required pre-promotion courses, according to a new service policy set to go into effect Jan. 1.

The Army on Tuesday announced the policy change meant to streamline the promotion process for deployed soldiers and also give pregnant soldiers a new pathway to promotion when their pregnancy keeps them from attending professional military education typically needed before attaining the next rank, said Sgt. Maj. of the Army Michael Grinston, the service’s top enlisted soldier.

“These scenarios like starting a family or deploying in a combat zone … should not be a reason that soldiers’ careers should be put on hold,” Grinston told reporters via phone on Monday ahead of his official announcement. “Listening to our soldiers, it’s something routinely people have said, especially for pregnancies, they’re saying, ‘Hey, when do I start a family?’”

Under the new policy, soldiers who are selected for promotion and meet every other standard except completing their required professional military education course can be advanced to their next rank, as long as the reason for missing that training is due to a deployment in support of a named operation or an imminent danger zone or if due to a pregnancy. The courses covered by the policy include the basic leader course, the advanced leader course, the senior leader course, the master leader course and the sergeants major academy, Grinston said.

Those soldiers must then go back and complete the training or they will be automatically demoted to their previous rank. Grinston said those who do not complete training will not be responsible for paying back money earned at the higher ranks.

For soldiers impacted by deployments, the missed professional military education course must be completed within one year for active-duty troops, according to the policy. Army Reserve and National Guard troops not on active-duty will have 36 months to complete the required course.

In 2019, the Army approved about 300 waivers for soldiers to be promoted temporarily to their next rank without attending their pre-promotion course due to a deployment, said Army Command Sgt. Maj. Mark Clark, the senior enlisted soldier for Army personnel. That process required soldiers to request the waiver through their chain of command.

Grinston said the new policy would “streamline” that process.

The Army previously had no process to allow pregnant soldiers to be promoted without completing their professional military education course. Under the new policy, those on active-duty temporarily promoted due to pregnancy will have two years to complete the course. Reservists and National Guard members not on active-duty will have 36 months to complete the course, according to the policy.

The new policy also allows soldiers selected for promotion to sergeant major who attend the virtual, nonresident sergeants major academy course to be promoted at the same time as those who complete the resident course in person at Fort Bliss, Texas. Grinston said those attending the nonresident course are often delayed being promoted through no fault of their own.

Grinston also said the changes are meant to help soldiers advance their careers even as they make major commitments. He said the Army intends to continue making the pre-deployment courses mandatory, but he also believes those selected for promotion should already have the skills needed to perform the duties required of their new rank.