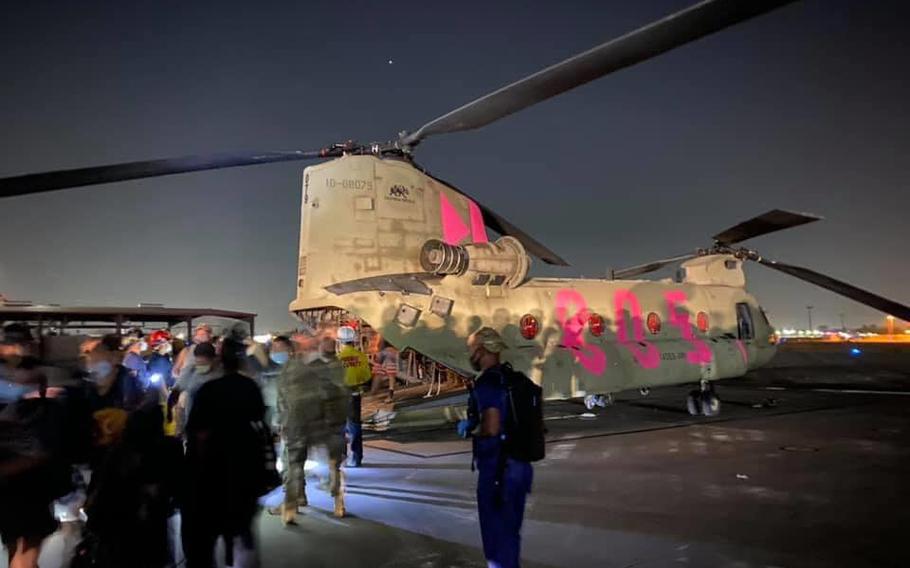 Evacuees from the Creek Fire in Fresno County, Calif., walk off a CH-47 Chinook from the 40th Combat Aviation Brigade of the California National Guard on Saturday evening. (Facebook)

WASHINGTON — More than 140 people and their pets were rescued Tuesday by California National Guard helicopters from a wildfire that is burning in the Sierra National Forest near Fresno, according to a National Guard official.

The Creek Fire has grown rapidly since it started Friday evening, burning more than 143,000 acres as of Tuesday, according to the California Department of Forestry and Fire Protection, otherwise known as CAL FIRE.

About 148 people and 16 dogs have been rescued Tuesday by helicopters with the 40th Combat Aviation Brigade, and evacuations are still ongoing, said Maj. Kimberly Holman, a spokeswoman with the California National Guard.

About 1,200 Guard troops are supporting the efforts to fight wildfires throughout the state, including 800 who are working to clear debris and make fire lines alongside CAL FIRE personnel, Holman said.

However, the Creek Fire has yet to be contained at all, according to CAL FIRE.

On Saturday evening, Guard troops rescued more than 200 people near the Mammoth Pool Reservoir due to the wildfire, The Associated Press reported. Photos from the rescue effort show a packed helicopter with people having to sit on the floor shoulder to shoulder.

On Monday evening, the helicopters could not find areas to land due to poor visibility from the fires. By Tuesday morning with the help of night vision goggles, members of the 40th Combat Aviation Brigade were able to fly two CH-47 Chinooks and two UH-60 Black Hawk helicopters to evacuate people and pets from the Creek Fire, according to Holman.

So far, 362 people have been evacuated by the brigade since Saturday, according to Holman.

There are also four C-130 aircraft that are dropping fire retardant across the state and rotary aircraft are conducting water drops in addition to evacuations, she said. Engineers from the 132nd Multirole Bridge Company also constructed a floating bridge in the Cache Creek river at the end of August to help firefighters quickly access the LNU Lightning Complex fire.

“This is what the California National Guard is made for, is for assisting in times like these with our civilian partners, first responders,” Holman said. “There may be a lot more fires in the coming months, but we're trained for it and we're ready for it.”

The fourth largest wildfire in the state’s history is known as the August Complex Fire. About 200 soldiers from Joint Base Lewis-McChord, Wash., arrived at the Mendocino National Forest in northern California one week ago to help the National Forest Service gain control of the fire. After a couple days of training, the soldiers from the 2nd Infantry Division’s 14th Brigade Engineer Battalion, 2nd Stryker Brigade Combat Team, were sent Thursday to begin their work.

Troops have conducted “mop-up” operations on areas where the fire is under control to ensure flames do not return, said Nicole Hawk, spokeswoman for U.S. Army North, which is overseeing the military response to wildfires in California. This work includes putting out hotspots and clearing burning or hazardous materials.

The August Complex Fire, which started Aug. 16, stretches across about 356,312 acres and is about 24% contained, according to the forest service. Low humidity and wind gusts of up to 50 mph have added to the difficulty of containing the fire, according to a news release sent Sunday by the forest service. In some counties west of the fire, evacuation orders were issued and an increase in fire activity and smoke was expected.